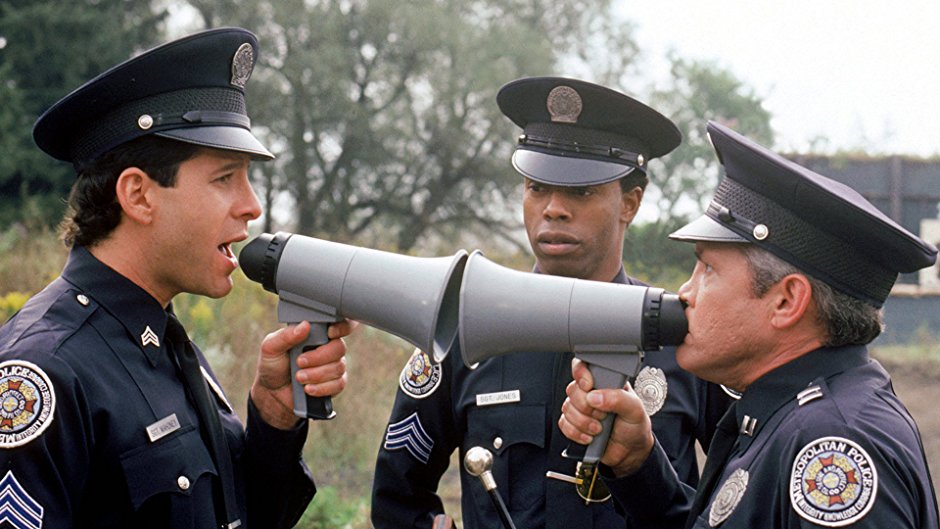 This is why we can’t have nice things. The first couple of Police Academy movies were fun comedy gems. The rest, well, they exist if you’re bored and are a masochist. That being said, there are fans of the franchise, and in this era of legacy-quels, anything is fair game to return.

A fan asked Steve Guttenberg whether we were getting another movie in the once-beloved series. Guttenberg’s answer was straightforward.

Adam , the next Police Academy is coming, no details yet, but it is in a gift bag being readied! https://t.co/HxzdmqS6WP

So, it certainly seems likely. The franchise has produced a bunch of stuff, including 7 films and a pair of TV series. And some of the sequels had subtitles, like Back in Training, Citizens on Patrol, City Under Siege, and Mission To Moscow.

The new one would be the eighth film in the series, which completely destroys what I was going to do here. I thought that we had 8 already. So I was planning this great paragraph about how this one would be the 9th film in the franchise. It consisted of me giving a plot synopsis about the crew going to Germany so the movie could be called Police Academy: Nein! But maybe that can be the next sequel, after Police Academy: Better L8 Than Never.

Guttenberg was in the first four Academy movies, and then left the franchise. It seems like he would be involved in this one, at least as Executive Producer, but I expect he will show up in the film as well.

The franchise gave boosts to actors such as Kim Catrall, Bobcat Goldwaith, and Michael Winslow. No word on whether they will return or not.

There is a chance to have this serve as a soft reboot. If they can get interesting talent involved on both sides of the camera, then it might garner new interest. It would be a wonderful vehicle for someone to stretch their comedy chops. Like say… Kevin Smith directing Josh Gad and RJ Cyler as the new recruits. If a team like that was assembled, then this idea might sound more appetizing.

How are you handling this news? Do you need to sit down? We’ll get through this together.

Here is the very 80s trailer to the original Police Academy movie, that has every cliche in the book: