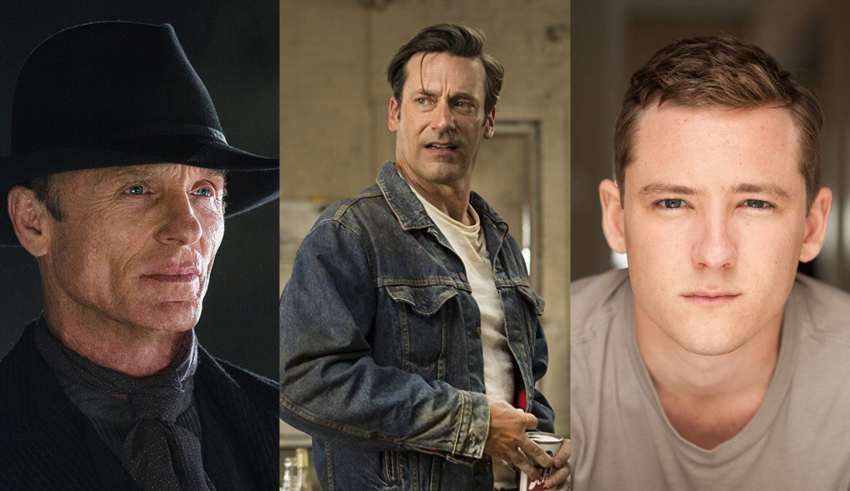 Joseph Kosinski’s Top Gun: Maverick is shaping up to be an intriguing sequel. First the director managed to convince Tom Cruise and Val Kilmer to reprise their roles as Maverick and Ice Man. Then Miles Teller was selected to play Goose’s son, a character who will be under Maverick’s tutelage in the new film. And now even more star power has hopped in the cockpit!

Deadline reports that actors Jon Hamm, Ed Harris and Lewis Pullman have all joined the cast of the upcoming sequel. While no details about any of the three’s characters have been released yet, the site notes that “Harris and Hamm add instant gravitas to the proceedings.” And while Pullman may be a relatively new actor to the Hollywood scene, he’s the son of actor Bill Pullman (aka Spaceballs‘ Lone Starr and President Whitmore in Independence Day). Not to mention, the younger Pullman is going to be in the upcoming Bad Times at the El Royale!

If I had to guess, Pullman is probably playing one of Teller’s peers among the new generation of pilots that Maverick and Ice Man will be teaching in the film. Likewise Hamm and Harris are both likely going to play other instructors at the academy alongside Cruise and Kilmer. Or perhaps they might be high ranking military officers. At this point, there aren’t many details out there about Top Gun: Maverick‘s story, so it’s really anyone’s guess at this point.

As previously stated, Top Gun: Maverick is shaping up to be an intriguing sequel. I can’t say in good faith yet if I think it’ll be a great one- but there’s some promising choices being made so far. If nothing else, I can’t wait to see the first trailer for this movie.