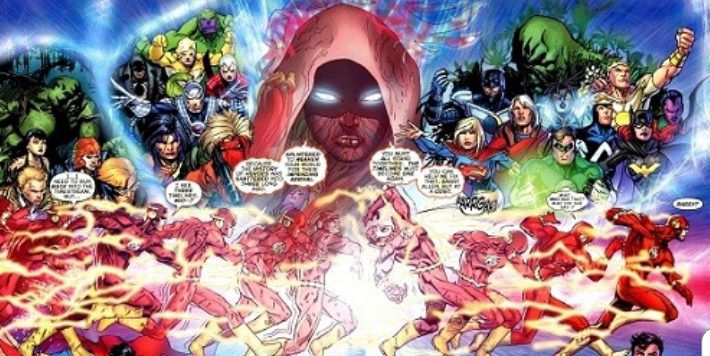 Time is one the most mysterious facts of human existence. Our lives exist within, around and through time. Because of its relation to the human condition, many storytellers throughout the ages have used or explored the concept of time, whether in a sophisticated or simplistic manner as a means to drive the narrative or provide a certain flair to the tale being told. The writers of The Flash comics over the years are no exception to the use of these concepts and over the decades have gracefully grafted Time as one of the pillars of, not only The Flash’s mythology; but that of the DC Multiverse as well.

In our last issue (check out issue #5 here), I had the honor of sharing my DC ACCIOVERSE theory, where I postulate that the DC Galaxy is composed of various multiverses that house all the different versions or interpretations of beloved DC characters. Primarily separated by the medium in which a particular iteration of the character first appeared in, I suggest 3 main multiverses: the DC Comics Multiverse (comic book main continuity and its variations. All DC source material), the DC Animation First or DCAF (This multiverse houses the character interpretation that originated in a animated format) and the DC ACCIOVERSE (Live-action multiverse).

Now, Time and its effect on a storyline or in a character’s interpretation is different than what the DC Multiverse offers. When discussing the DC Multiversity, you are seeing completely different versions of DC characters whose stories are told from start to finish in a completely different Earth where different decisions were made or certain events took place at key moments that proceeded to shape a story in way that it contrast to the one that we would consider the “main” or “official” continuity. But when exploring Time and the changes that it can bring to a character, whether its exploring a different time period or exploring the different outcomes of a certain decision and its effects, it all takes place within the same Earth.

Since any story that explores the concept of Time takes place within the same Earth and dimension, you are no longer exploring a different version of a character; but the same character with a different lens. Alternate timelines explore the effect of a character’s decision, not only on his life, but on the lives of those that surround him and the world he inhabits; without erasing the character’s knowledge of these alternate lives. And if Flashpoint has taught us anything is that when you make a time alteration and then attempt to fix it, things can get better; but they will never be the same as before. The worse might go away, but there are changes that stick and others that come with the solution. Time alterations stick and change a Earth forever. There is no going back.

With Time being a pillar of The Flash mythology, some of the best The Flash stories are Time-related. Would you be surprised if I told you that The Flash’s greatest adversary, Eobard Thawne a.k.a The Reverse-Flash is from the future, the 25th Century to be exact? The brilliant team of writers of The CW’s The Flash have also made sure that Time was embedded into the DNA of the show from the very beginning; but maybe not in a way that you might expect. The funniest thing is that they told us this from season One and to see how the show has continued to evolve in their exploration of Time is fascinating. Wondering how they have engraved Time into the heart of the show? Here is how:

-The Flash TV Show takes place in an alternate timeline-

Do I have your attention?

Explained in detail during season one’s final episode, we find Professor Stein explaining how the battle between The Flash and The Reverse-Flash culminated in an alteration of the main timeline of this show’s Earth One when The Flash saved his younger self and The Reverse-Flash killed Barry’s mother, Nora. Without a way home, Eobard Thawne made the decision to accelerate the birth of The Flash which in turn would allow him to regain access to the Speed Force and to his time. This makes me wonder: If the show takes place in an alternate timeline, which is the main timeline?

Here is what we know from the details that we get from episodes 17-23 of season one of The Flash: The particle accelerator is not built till 2020, which means that Barry is not struck by lightning and become The Flash till that year. Barry Allen was raised by both his parents, was married to Iris and was beloved by Central City. The Reverse-Flash had been battling against him for years. The CW/DC shows have a tendency of using our real-world present date and time as the same one for the shows which means that with The Flash show starting during Fall 2014, the Barry Allen we know on screen became The Flash 6 years earlier than the original version of The Flash of that Earth because of Eobard Thawne. We also get a glimpse of the original Flash when Barry travels to the date of his mother’s murder on episode 23 of season one.

This alternate timeline take on The Flash’s origin story is one of the many reasons why I love The Flash TV show. They might have dropped the ball in certain occasions (cough, cough Season 3 “flashpoint”), but this take has opened the show to an infinite amount of story possibilities. During Season 5, we will get a glimpse into the future as we get to know Barry and Iris’ daughter Nora (which has been confirmed to be Xs from the comics) and the world she comes from while also hoping that we get some revelations about the future newspaper from April 25, 2024.

The show’s current alternate timeline has been changed at least 3 times. Once on season one and twice during season 3 and we have seen how Barry has retained the memories from those alternate timelines. We have also seen how other characters have changed and how their relationship with Barry was affected by the timeline changes. I am very excited for what lies ahead and what Time-related stories await us throughout the following seasons; but if there is a specific adaptation that I am dying to see on screen is the origin story of the Reverse-Flash. I believe that he is one of the most interesting villains in all of DC comics and I can’t wait for the world to see more of him.

What is your favorite Time-related story? Is it a Flash story? What are your thoughts about how The CW has handled Time and Time-travel on The Flash TV show? I know I am not a scientist or expert on the topic of Time; but I thought speedsters like us could use a lap in the right direction. Let me know what you think of this week’s issue in the comments below or catch me on Twitter @LexanAlvarado.

On our next issue, we will dive into the origins of The Scarlet Speedster’s greatest foe, The Reverse-Flash!

And as always, I’ll see you at the finish line

Next post Danny Boyle Has Exited BOND 25, And Possible Replacements