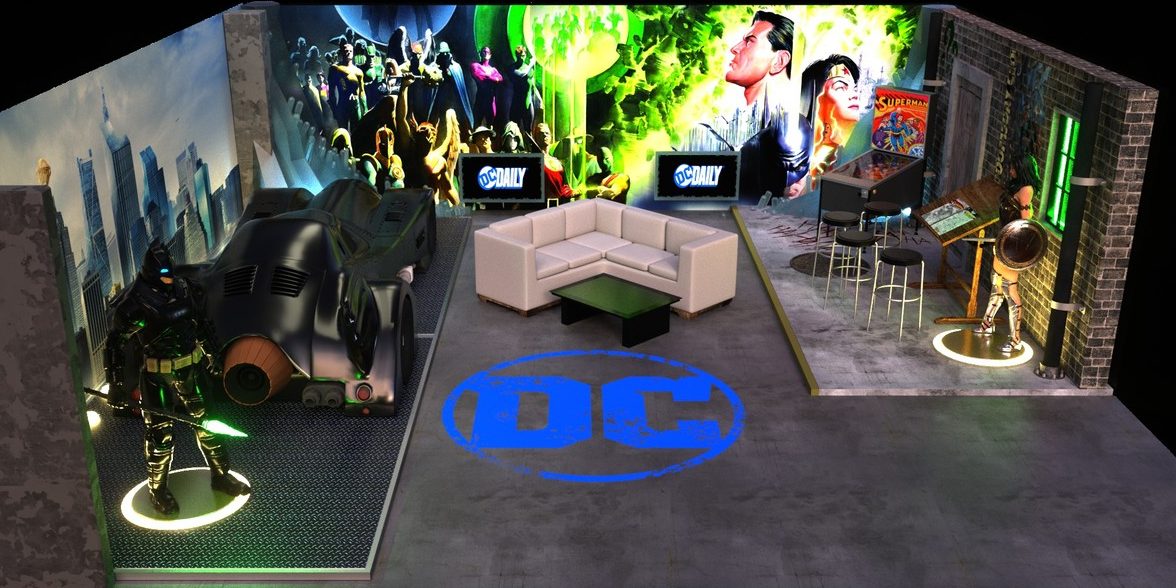 The tricky thing with scoops, especially when you break them at their earliest stage, is that you sometimes have to wait for what feels like ever to see them come to fruition. Back in January, I found out the day they green-lit it, that the studio was planning a new DC daily news show. An insider told me that one of the reasons the studio was eager to launch something like this was to help cut down on leaks and give fans everywhere an official place to get their DC news fix.

Then the trail went quiet. For a long time. In June, I took solace in the fact that The Hollywood Reporter vaguely mentioned something about it, but still, I was anxious to get something official from DC itself.

DC has officially announced the arrival of DC Daily, and added some extra details- including a picture of the set (above), and an announcement that a special kickoff event next week will be hosted by Kevin Smith!

Smith took to twitter today to announce the special preview event which will be hosted on YouTube next week, which will focus on the DC Universe service itself. It will go live on August 29 at 4:30PM PST.

One Week from Today! I’m gonna show you what @TheDCUniverse is gonna look like when the #DCUniverse app officially opens for Bat-business this fall! https://t.co/dWfqb0SlpT

Here’s how DC Comics describes what DC Daily will be:

“DC Daily will offer DC UNIVERSE members an added depth of news content that ties back to the original series, comics and community on the new service launching this Fall. DC Daily will be hosted by a variety of faces familiar to DC fans, with special guests and other co-hosts joining the daily cast. Currently the DC Daily format is scheduled to include ‘Headlines,’ a run-down of daily news briefs; ‘Reports,’ a single-topic segment that may feature an in-depth interview or deep dive into an upcoming book, film or series; and ‘Talk,’ a panel discussion including in-depth analysis about today’s hottest topics and news, which will be exclusively available only to DC UNIVERSE members via the subscription service.”

Beyond that, the official announcement reveals that the show will stream daily, from the dedicated set pictured above at the Warner Bros. Digital Networks studio in Burbank, CA.

While you can bet that the bulk of the show will be used to hype things up that are on the DC Universe network itself, they’re also committed to discussing DC’s cinematic endeavors- and the set even includes a film references like Batman v Superman: Dawn of Justice’s Dark Knight holding that Kryptonite spear in the corner, as well as the Batmobile from Tim Burton’s Batman.

This really is great news, especially if you’re someone- like me- who’s tired of all of the endless rumor and innuendo that surrounds DC Entertainment’s cinematic endeavors. With a daily news series like this, you can bet that they’ll be able to firmly control what’s being reported and end all of the rampant speculation- and a fair amount of the leaks- that tends to bog down people’s perception of DC on film.

I know we’re not the biggest site, and we’re only eight months old, but thanks to everyone who believes in us- and has continued to believe in me- as stories like these continue to validate things I’ve shared ages ago. A couple of weeks back Matt Reeves confirmed a ton of what I’ve been telling you about The Batman, and now this today…well, it’s all very rewarding. I really do share these things with you with your best interests at heart, and I’m always so grateful to the confidential sources I’ve cultivated who help me give you a heads-up about what’s on the horizon.

Also, stay tuned for my one-on-one interview with the legendary Mark Waid on this Friday’s The Fanboy Podcast! I’ll be chatting with the writer of Kingdom Come and Superman: Birthright about all things Superman, and it’s sure to be a treat for fans of the Last Son of Krypton.

Previous post ARROW: A Particular Moment In Season 7 Had To Get The CW Censors Involved

Next post Netflix Is Making a DEATH NOTE Sequel