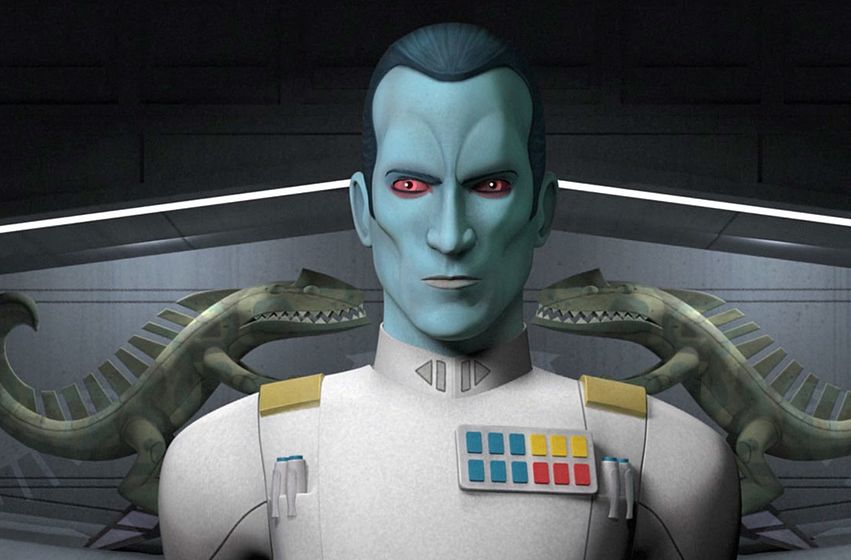 Usually, someone not playing a certain character isn’t news. Spoilers: I’m not playing Ant-Man’s daughter Cassie in Infinity War. But sometimes, rumors become so hot that The Liberty Valance Effect takes over, and the legend becomes fact.

That is what happened here. When Richard E. Grant was announced as joining the cast of Episode IX, rumors ran rampant that he was playing Thrawn in the J.J. Abrams helmed final chapter of the Skywalker Saga. And that’s not necessarily hard to believe, since there was a rumor a few months back that there were auditions being held for the character.

While doing an interview with the Radio Times, the interviewer brought up Thrawn, and Grant had this to say:

“I’m not playing the Star Wars character you just mentioned,” Grant shared with Radio Times when Thrawn was brought up. “I’m not allowed to tell you anything. Otherwise I would be fired.”

He also mentions the secrecy surrounding the film.

“It’s a complete lockdown on any information whatsoever.”

The Radio Times made it sound like he said that sympathetically, like he would like nothing more than to share with all of us who he is playing. Grant is very excited to be in Star Wars, as you can see by his tweet below.

From left of field, came a call from my Agent about a generic audition scene I’d self taped a couple of months ago ……. @starwars courtesy of casting director #Nina Gold #Star Wars pic.twitter.com/zmGCHIlheu

His joy is palpable! So whoever he’s playing, the role is in good hands.

Let me just posit this though: Grant could very well be lying. I mean, this is an Abrams film we are talking about. When he made Star Trek Into Darkness, Abrams lied up and down about Benedict Cumberbatch’s role, saying he was playing a man named “John Harrison” instead of Khan. He even had other cast members like Simon Pegg lie about Cumberbatch’s role:

“It’s not Khan. That’s a myth. Everyone’s saying it is, but it’s not. I think people just want to have a scoop. It annoys me — it’s beyond the point to just ferret around for spoilers all the time to try to be the first to break them.”

Spoilers: Cumberbatch was Khan. It is possible that Abrams could be doing a similar maneuver here. However, he has been on record as saying that he regrets how he treated the Khan thing, so maybe he doesn’t want to do the same thing again.

“The truth is I think it probably would have been smarter just to say upfront ‘This is who it is.’ It was only trying to preserve the fun of it, and it might have given more time to acclimate and accept that’s what the thing was. The truth is because it was so important to the studio that we not angle this thing for existing fans. If we said it was Khan, it would feel like you’ve really got to know what ‘Star Trek’ is about to see this movie,” he said. “That would have been limiting. I can understand their argument to try to keep that quiet, but I do wonder if it would have seemed a little bit less like an attempt at deception if we had just come out with it.”

So, do I believe Grant? Yes. But there is evidence to support the fact that he could be lying. Only time will tell.

Previous post The BATWOMAN ARROWVERSE Crossover Dates Have Been Announced