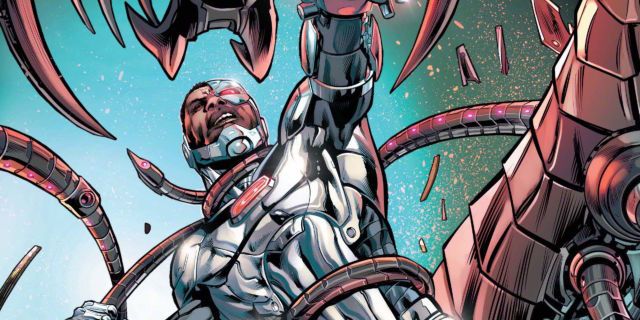 The First Purge‘s Joivan Wade has joined DC Universe’s Doom Patrol in the role of Victor Stone aka Cyborg, EW  is reporting. The official character description is below.

Vic Stone is the charming and sarcastic half-human, half-machine superhero known as Cyborg. Vic may be connected to every computer on the world, but he struggles to maintain the connections that make him human. Desperate to gain acceptance from the outside world, Vic harnesses the curse of his cybernetic body and uses his powers as the ultimate hero for the digital age.

Cyborg first appeared in DC Comics Presents 26 created by Marv Wolfman. He then was a prominent member of the New Teen Titans for about 30 years before hopping over to the Justice League in 2011. Stone was an incredible student with a genius level IQ only to suffer a terrible accident whose life was saved only because his father turned him into half man, half machine.

Cyborg was most recently played by Ray Fisher in 2017’s Justice League, and Fisher is actually expected to reprise his role in a solo film which, according to Silas Stone actor Joe Morton, is scheduled to shoot in 2020.

Doom Patrol is spinning out of the upcoming live action Titans, where the main Doom Patrol members are debuting. Bruno Bichir, who was cast as The Chief, is not expected to reprise his role in the spinoff, with Kelsey Grammar reportedly in talks to replace him. Diane Guerrero recently joined the spinoff in the role of Crazy Jane. April Bowlby is already confirmed to be reprising her role, with Dwain Murphy and Jake Michaels expected to follow suit. The show is filming this fall in Atlanta with an expected 2019 release. You can read the official plot synopsis below.

Doom Patrol is a re-imagining of one of DC’s most beloved group of outcast Super Heroes: Robotman, Negative Man, Elasti-Girl and Crazy Jane, led by modern-day mad scientist Dr. Niles Caulder (The Chief). The Doom Patrol’s members each suffered horrible accidents that gave them superhuman abilities—but also left them scarred and disfigured. Traumatized and downtrodden, the team found purpose through The Chief, who brought them together to investigate the weirdest phenomena in existence—and to protect Earth from what they find. Part support group, part Super Hero team, the Doom Patrol is a band of super-powered freaks who fight for a world that wants nothing to do with them. Picking up after the events of Titans, Doom Patrol will find these reluctant heroes in a place they never expected to be, called to action by none other than Cyborg, who comes to them with a mission hard to refuse, but with a warning that is hard to ignore: their lives will never, ever be the same.