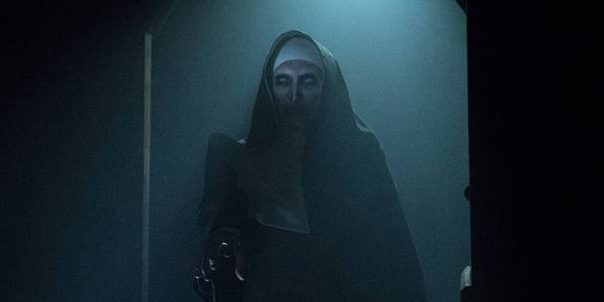 The Nun is one of those horror movies I simply can’t wait for. From the moment the character first popped up in James Wan’s delightfully creepy The Conjuring 2, I recall thinking “I want to see more of her. What’s her deal? What’s the backstory there?” That’s why I got so excited when it was announced that a The Nun spinoff movie was on the way.

Now I’ve got two awesome new stills from The Nun to share with you, courtesy of Empire. One of them features the great Mexican actor Demian Bichir:

“When a young nun at a cloistered abbey in Romania takes her own life, a priest with a haunted past and a novitiate on the threshold of her final vows are sent by the Vatican to investigate. Together they uncover the order’s unholy secret. Risking not only their lives but their faith and their very souls, they confront a malevolent force in the form of the same demonic nun that first terrorized audiences in “The Conjuring 2,” as the abbey becomes a horrific battleground between the living and the damned.”

The Nun will also star Taissa Farmiga, Charlotte Hope, and Ingrid Bisu. The film was written by Gary Dauberman, based on a story by Wan. It’s directed by Corin Hardy, best known for The Hallow.

The Nun arrives in theaters next month on September 7.