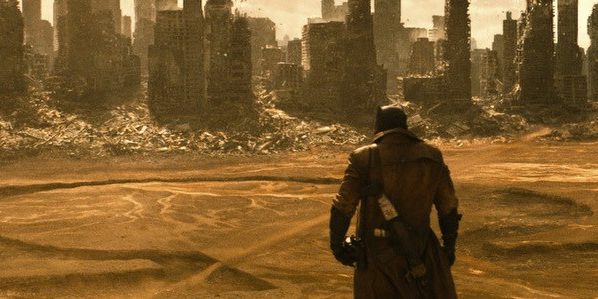 Something I discussed with Brett on this week’s edition of The Revengers Podcast was the idea that Zack Snyder’s DC movies may not have been intended to launch an everlasting DC shared universe. While it was widely assumed that Snyder was tasked with creating a full blown shared universe for Warner Bros. and DC Entertainment that would rival Disney’s Marvel Cinematic Universe, there has been plenty of circumstantial evidence pointing to Snyder wanting to tell a single, self-contained story.

The counter to the initial assumption was, “No. What he was working on had more in common with Christopher Nolan’s Dark Knight movies than it did with Kevin Feige’s MCU movies.”

In other words, rather than creating a landscape from which an endless array of DC movies can sprout like the MCU (which is on Movie #20 now, with another 87 seemingly on the way), Snyder had a specific five film arc he wanted to tell- an arc that would be complimented by additional films like David Ayer’s Suicide Squad. In that way, it would be similar to the way Nolan told a singular story, with its own beginning, middle, and end, and wasn’t intended to go beyond that.

In an exchange with a fan on Vero, he was asked whether or not this was the case and Snyder answered, simply, “Yes.“

And it makes sense, when you think about it.

It’s why he did things like start us off with an older, aging Batman; Kill off Superman’s Clark Kent disguise persona, as well as Dick Grayson and Jimmy Olsen; Introducing a Wonder Woman who turned her back on humanity for a century, and therefore only really existed during World War I and then vanished until Doomsday showed up on that fateful night in Metropolis. You can do stuff like that, creatively, if you’re only planning on telling one very specific story.

Also, folks close to his production team have privately confirmed that he was building towards an Injustice-style movie. For those unaware, here’s the general premise for the Injustice: Gods Among Us video game that Snyder was said to be pulling inspiration from:

“The storyline is set within an alternate version of the Justice League’s universe. In this reality, Superman becomes a tyrant and establishes a new world order after the Joker tricks him into killing Lois Lane and destroying Metropolis with a nuclear bomb. In an effort to stop this, Batman summons counterparts of the League’s members from another universe to join his insurgency and end the totalitarian regime.” (Courtesy of WikiPedia)

While he wasn’t likely to do a direct adaptation, and would merely borrow elements from the game’s storyline in a way similar to how Dawn of Justice borrowed from a few key books, it’s clear to see he was dropping hints about a very Injustice-like scenario playing out by way of the “Knightmare” sequence in BvS and some of his unused plans for Justice League.

In many ways, the seeds Zack Snyder was planting weren’t going to jive particularly well with launching movies like Nightwing, or giving longevity to a solo Batman series with Ben Affleck, and were putting the creative teams behind Wonder Woman and Superman in a tough spot. This may all be part of the reason why he and Warner Bros. would go on to clash so mightily once they laid eyes on his early cut of Batman v Superman: Dawn of Justice, which led to his power within DC Entertainment evaporating between the winter of 2016 and the spring of 2017.

His was a bold strategy, and could’ve been an interesting way to go. But it might not have been the best footing for the kind of evergreen franchise the studio seemed to want. What do you think?

Previous post THE FLASH To Begin Production In Early 2019

Next post RUMOR: BIRDS OF PREY Synopsis Hits The Internet