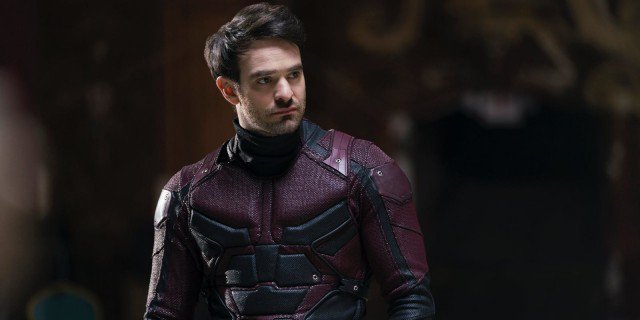 With both Jessica Jones and Luke Cage debuting in their sophomore seasons this year and Iron Fist season two releasing in September, it didn’t seem likely we’d get a fourth Marvel Netflix show this year. It seemed like the original Marvel Netflix star, and fellow Defender, Daredevil was going to be left out of the party. But, lo and behold, we will lay eyes on Matt Murdock this year.

During Netflix’s Q2 earnings video, CEO Ted Sarandos confirmed in the midst of a whole lineup of the rest of Netflix’s 2018 shows that it is indeed coming this year.

“In the short term, we’ve got new seasons coming up, in the second half of this year, of Orange is the New Black, Ozark, Iron Fist, Daredevil, Narcos, the finale of House of Cards, the follow-up series to Making a Murderer.”

Bullseye is confirmed to appear this season with Wilson Bethel in the role. Based on the finale of The Defenders, it seems the upcoming season will pull elements from the Born Again storyline. Vincent D’Onfronio is rerising his role as Wilson Fisk, with Charlie Cox, Deborah Anne Woll, and Elden Henson reprising their roles as Matt Murdock, Karen Paige, and Foggy Nelson, respectively.

Erik Olsen is serving as showrunner with series creator Drew Goddard acting as a consultant. Production for the third season began in November of 2017 and ended in June 2018. The season will most likely debut in November or December if they follow the usual separation of the shows, with Iron Fist is airing September.

Are you a fan of the Marvel Netflix shows? Are you looking forward to seeing Bullseye’s small screen debut? Let us know in the comments!

Previous post Cameron Welsh On The Eradicator Appearing On KRYPTON

Next post THE FLASH To Begin Production In Early 2019