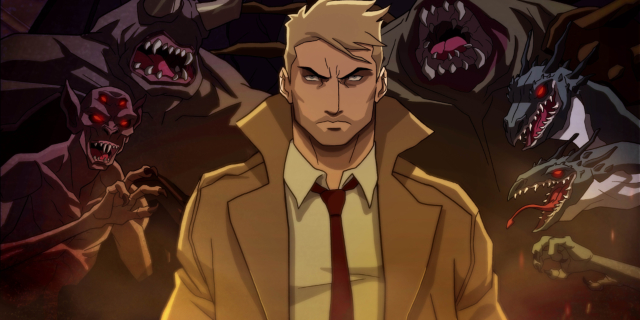 Get ready DCAU fans! John Constantine’s cartoon adventures from the CW Seed are being finished in a full length animated feature releasing on October 9th. Matt Ryan is reprising his role as the Hellblazer, with Damian O’Hare, Laura Baily, and Emily O’Brien rounding out the rest of the cast. The film has been rated R for bloody violence/gore, disturbing images, and some sexual content, reports JoBlo.

Here’s the official description, and you can check out the trailer and cover art below!

A decade after a tragic mistake, family man Chas and occult detective John Constantine set out to cure Chas’s daughter Trish from a mysterious supernatural coma. With the help of the mysterious Nightmare Nurse, the influential Queen of Angels, and brutal Aztec God Mictlantecuhtli, the pair just might have a chance at outsmarting the demon Beroul to save Trish’s soul. In a world of shadows and dark magic, not everything is what it seems, and there’s always a price to pay. The path to redemption is never easy, and if Constantine is to succeed, he must navigate through the dark urban underbelly of Los Angeles, outwit the most cunning spawns of hell, and come face to face with arch-nemesis Nergal – all while battling his own inner demons!

After the cancellation of Matt Ryan’s Constantine on NBC, no one quite knew where the Hellblazer would end up. Luckily enough, he crossed over to Arrow in its third season, and then on to Legends Of Tomorrow  for a guest spot in its third season and will now be a series regular for season four. Ryan’s love for the character carried over to the animated side of DC as well, reprising his role as Constantine in the DCAU movie Justice League Dark. Following that cartoon adventure, he hopped over to the CW’s streaming service CW Seed, where he voiced the character in a series of shorts that add into one big story.