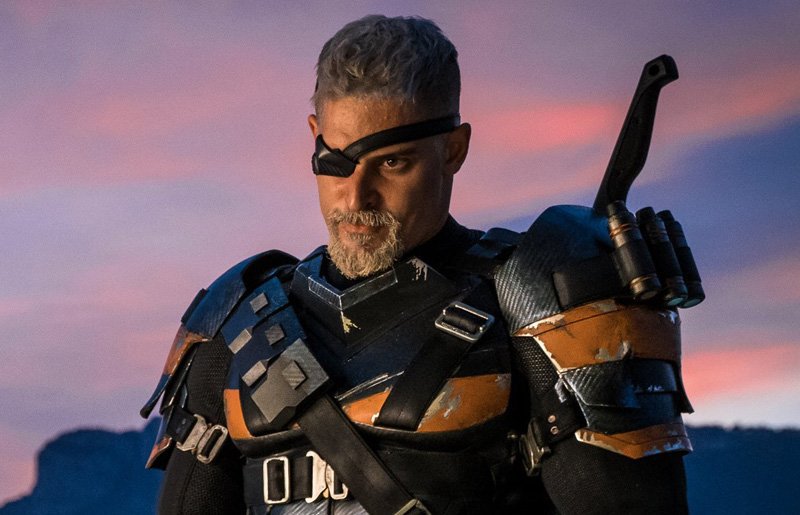 Justice League fans who stayed after the credits of the movie were in for a surprise when Joe Manganiello showed up as Deathstroke in a meeting with Lex Luthor. It seemed to be teasing the Legion of Doom, or an Injustice League, or something like that, but nothing ever came of it.

Things are being reshuffled behind the scenes, but Manganiello tells MTV that he is still very much involved in the franchise. You can watch the video below.

I say, ‘It’s in the works,’ because it is and there’s nothing further that I can say without speaking out of school, because I’m part of a team, I’m a part of a locker room — you don’t talk outside the locker room. But all I can say is, for the hardcore fans, it’s in the works. They want the character to happen, it’s just when he happens.

This is the sort of “locker room talk” that I like. Deathstroke is a profitable character, and he was taken away from Arrow because DC wanted to use him for the movies. I would be fine with him remaining in the Arrowverse, because I love Manu Bennett’s take on the character. But since that isn’t happening, it is nice to be reassured that something is happening with the character.

If you absolutely cannot wait for and need a Deathstroke fix, then you have a few options. One, Slade Wilson has an incredible arc in the sixth season of Arrow that just ended. Watch episodes 6.05 “Deathstroke Returns” and 6.06 “Promises Kept” to quench your thirst. But if you prefer something on the big screen, then you are also in luck – the character appears in Teen Titans Go The Movies which is in theaters Friday.

When we hear anything more on Deathstroke we will be sure to keep you posted.

Next post Dan Stevens Joins The Cast of CALL OF THE WILD With Harrison Ford!