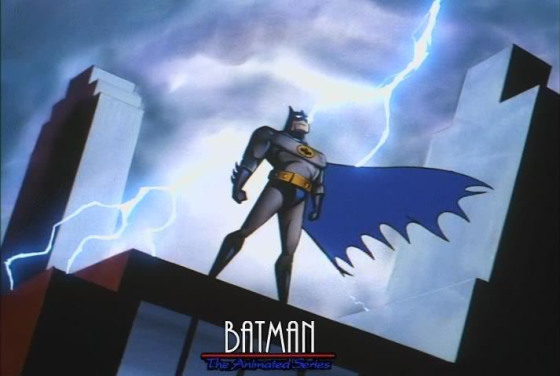 “Batman finds himself tangling with a Jekyll-and-Hyde bat creature after it attacks a night watchman and the police wage a war on the Dark Knight. “ (Warner Brothers Animation)

Batman: The Animated Series, is a classic show and piece of Batman history. Every classic show needs to start somewhere, and for Batman : TAS, it’s “On Leather Wings.” I give a lot of credit to Bruce Timm and Paul Dini for having faith in their show, to kick it off with a secondary villain like Kirk Langstrom aka Man-Bat. While more obscure, it’s actually a perfect fit. Man-Bat is the literal physical representation of a bat-man, and is the perfect antithesis to our costumed caped crusader. He’s also an allegory of the Jekyll and Hyde character, and when you watch the episode, you realize, so too is Batman, in a way. Both Kirk Langstrom and Bruce Wayne embody the spirit of that story. Both men struggle with duality. Both maintain a good well adjusted persona and both hide a dark persona, that unleashes more of an animalistic violent nature. The difference being, Bruce Wayne is able to rein his in and uses that darkness as a force for good. The episode does a great job of briefly introducing the other core characters of Batman: The Animated Series. Namely, Detective Bullock and Commissioner Gordon. They establish that Gordon doesn’t see Batman as a menace, while Bullock definitely sees him as a dangerous vigilante. The show sets up Batman as a pre-existing figure in Gotham City, that the Mayor wants the police to apprehend. The episode spends much of it’s time in showcasing Batman’s detective skill. He spends 3 quarters of the episode discovering and piecing together clues about Man-Bat. This was fantastic, because most non comics adaptations, gloss over the detective aspect of the character. My only slight negative is that, the actual Batman Vs. Man Bat confrontation seemed a little too rushed for my liking. That and the fact that Batman was able to get the Man-Bat formula out of Doctor Langstrom off screen and rather quickly.

The animation is fantastic. I love the dark blue/black and grey colour scheme with yellow oval symbol for Batman’s costume. I always viewed it as the animators making a nod to the Adam West costume in a way, but with darker shades. The Bat-Computer was a definite nod to Batman 66, sounds and all. The Batmobile took it’s nods from Tim Burton’s iteration, but was it’s own beast, being longer and sleeker. That opening credits montage, is possibly the most beautiful thing, I’ve ever seen lead off any TV show. Batman cloaked in the shadows taking down bank robbers, the Batmobile roaring through the streets, and it all culminates with a bolt of lightening, illuminating Batman on the rooftop of a Gotham skyscraper! I’ve got chills just describing it! Speaking of Gotham City, I love the look of it. It’s the 1939 Worlds Fair meshed with early 1990’s modern day, and putting those two together, gives the city and the series a sense of timelessness This was certainly not the best episode of Batman: The Animated Series. This show is filled with episodes deserving of that crown. However, it set the tone for what was to come. It had me speechless when I first watched it 26 years ago, and I was just as excited when I watched it again the other day. This series had as much influence, if not more on my Batman and superhero fandom. as Batman 66 and Tim Burton’s 1989 Batman film. Nursing an injury, gave me just the excuse I was looking for to start reviewing this animated masterpiece. If you want to follow along, my reviews will go according to how episodes appear on my copies of the DVD! By the way, I will probably double dip and re-purchase the series when it hits Blu-Ray! It’s that damn good!