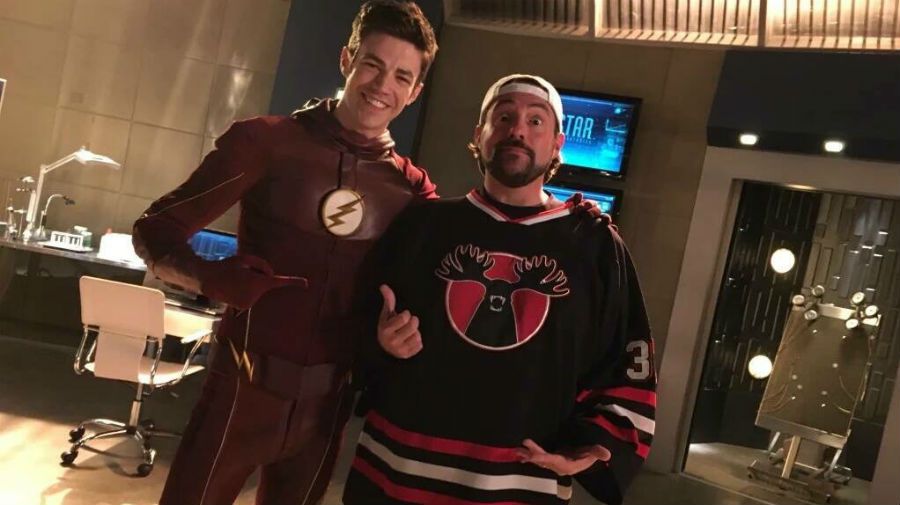 Kevin Smith is the unofficial Godfather of San Diego Comic Con. The newly minted Inkpot award winner, and Jay and Silent Bob creator always has a Hall H Panel on Saturday nights. In addition to that he does several comedy shows during the week. Now he has added hosting a celebrity chat show for IMDb on the IMDBoat during Comic Con.

Anyone who is familiar with Smith knows that he is long in the tooth – it takes a lot of acting skill for a man who talks as much as he does to be “Silent” Bob. In fact – his last show of Comic Con – Hollywood Babble On – I was in attendance for, and you could definitely hear that he didn’t have much of a voice left.

According to CBM, Smith revealed during his chat in Hall H that Jay and Silent Bob Reboot was slated to start filming in November. That isn’t news in and of itself, because he’s been saying it is going to start filming since the beginning of last year, and due to incomplete funding, it keeps getting pushed back. So don’t actually hold your breath for a November filming date.

The news is who will show up in the flick with them. If you have seen Jay And Silent Bob Strike Back you know that it is absolutely packed with celebrity cameos, who are friends with Smith. As Reboot is essentially a sarcastic remake of the Strike Back, the same thing will happen in the new one. But Smith has some new super friends now.

Smith revealed that The Flash star Grant Gustin, along with his co-stars Carlos Valdes and Tom Cavanagh will make cameos in Reboot. I assume they will be playing themselves, but who knows, they could be playing anybody.

For those that don’t understand the concept of Jay and Silent Bob Reboot I will let Smith himself colorfully explain it to you:

“Meta” humor is popular right now, so this should work out well if Smith can ever actually get to filming it. If you are worried that it is has been a while since they reprised their roles and might not be able to pull it off, then watch the video below. Earlier this year, Drake released a music video that was essentially a Degrassi reunion, and Jay and Silent Bob were a part of it. You can see them throughout the video, but their big parts are at the 2:57 and 5:07 marks.

Are you excited to see The Flash boys mix it up with Jay and Silent Bob? Do you think the movie will actually begin filming in November? Let us know.

Next post GREEN LANTERN CORPS To Be ‘Complete Re-Imagining,’ According To Geoff Johns