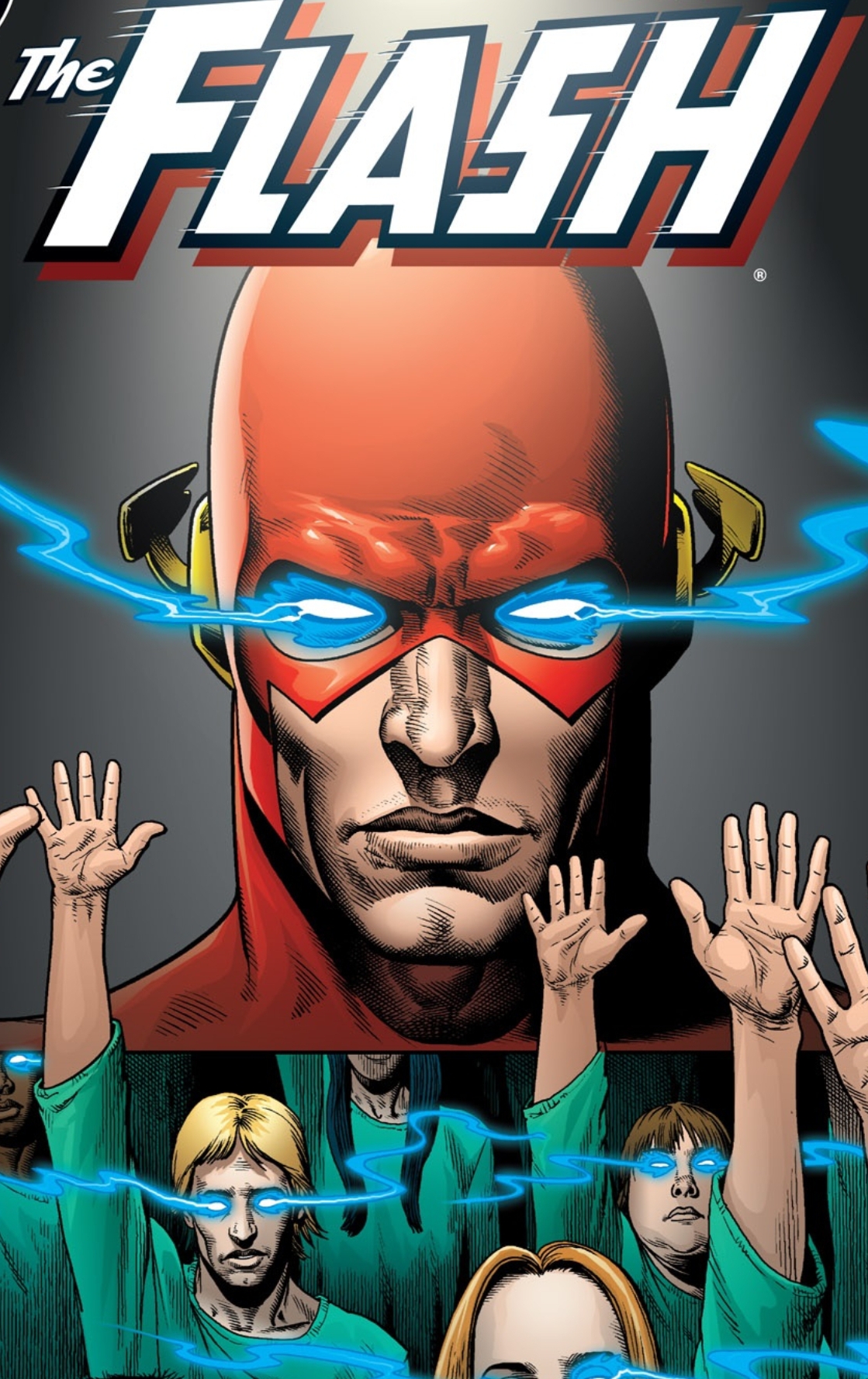 With San Diego Comic-Con only days away and all Arrowverse shows officially starting production for their respective premieres next fall, the speculation game is on full-throttle. Here at The Final Lap HQ, we have already been talking about possible directions in which The CW’s The Flash can go this season based on previous show history and the introduction of Nora, Barry and Iris’ daughter. What we haven’t explored is who the Big Bad for the season-long arc will or could be. Trust me, there have been rumors wandering online based on comments from The Flash showrunner Todd Helbing, alleged casting calls and “bochinche” about an actor that might be cast in the role. The only piece of information that has been substantiated as 100% true is that the showrunner has confirmed that the main baddie this time around will not be a speedster. Even though I like me some Reverse-Flash, based on how satisfied they were with the Thinker this last season (which was pretty good in my opinion), I’m looking forward to what they bring to the table this fall. I haven’t the method or the means of confirming who the main villain is; but I have the intention of keeping you informed of who the Flash family of fans believe it can be, with a hint of fantasization of course. So, without further ado, let’s dive into our comic book vault and get this lap started, shall we!

Activate your Flash Ring and suit up!

If you are a fan of The Flash TV show and are hungry for answers or have scoured the web for information about the future of the show, you have heard or read this name: Cicada. The trades believe this homicidal, megalomaniacal cult leader might be the menace that team Flash must save Central City from during season 5. The question is: “just who is Cicada?”

With a total of 29 appearances throughout DC comics, Cicada’s story and introduction is found in The Flash issues #170-73 during the Geoff Johns “Blood Will Run” story arc. Later revealed to be David Hersch, Cicada is a metahuman with the ability to absorb the life force of others which in return grants him with impressive healing and regenerative capabilities which practically make him immortal. After murdering his wife and being overwhelmed by guilt, he attempts to take his own life but is abruptly stopped by a bolt of lighting which in turn grants him these abilities. When struck, Cicada states, he had a vision of his wife coming back to life and claims that The Flash is the key to making this possible. This leads to Cicada’s obsession with The Flash and the creation of the Cult of Cicada. Members of the Cult believe that they are the chosen children that will be granted immortality alongside their leader. What makes this premise interesting and terrifying is how this immortality is achieved. How, you ask? By murdering the people that The Flash has saved during the years and absorbing their life force. Cicada has taught his followers that the people that The Flash is their “god” and he saves people that they may be used as sacrifices for them to become eternal.

The results of this vision can be seen in this panel:

Frightening, right? It sounds crazy, dark and gritty; but very interesting nonetheless. Even though part of me believes that the cult-thing was already done during the first half of season 3 of The Flash to a degree and it was explored during Supergirl’s last season with Covill‘s followers: I believe that the Cult of Cicada has a lot of potential for a season-long arc. The murders, the cult, the lightning daggers, Magenta, the truth about Cicada’s wife and plenty more is on the table for the writers to play with. More importantly, the fact that the main version of The Flash is Barry Allen actually works in favor of a Cicada-arc adaptation.

Here is why: during the comic book arc, in which Wally West is The Flash, the personal connective tissue between Wally and the narrative begins with an exploration of the hero’s past relationship mistakes. In the first issue, he encounters two ex-girlfriends and then proceeds to come to terms with how much of a jerk he was. It is this connection with these two women that is used as a backdoor into the villain’s plot. This makes sense with the Wally West Flash; but not with Barry, which makes that much better.

Run with me on this:

“After saving Central City and the world from The Thinker and The Enlightenment, The Scarlet Speedster is recognized as one of history’s greatest heroes as his fellow citizens celebrate Flash Day and break ground on Central City’s newest attraction, The Flash Museum. Festivities are cut short though, when a body is found in one of the kiosks at the festival. Central City’s finest proceed to cordon off the surroundings to investigate. Hearing of the tragedy, talented and recently re-instated CCPD CSI, Barry Allen rushes to the scene and begins his investigation. He is surprised to find that the weapon used for this murder is similar to the used in a murder that took place 2 days ago. As Barry shares his findings with team Flash, another murder comes to light and the team arrives to a common denominator: The Flash himself”

This sounds amazing to me, because with every passing season we have spent less and less time at Barry’s day job as a crime scene investigator and this Cicada-arc lends itself perfectly for a deep and crime-procedural angle. Not only can it highlight Barry’s skills as a CSI, but also serve as platform to continue developing Iris as a reporter/journalist while also developing The Flash’s relationship with the police.

But what I am most excited about is the idea of introducing The Flash Museum this season and how it acts as a representation of Central City as a character. During my favorite episode this last season (Trial of The Flash, S4-EP10), while the judge is sentencing Barry, we have a juxtaposition between the judge and CCPD Captain Singh. While Barry is being sentenced for a crime that he didn’t commit; The Flash is being awarded for the countless times that he has put his life on the line to save the city. The love that Central City has for its hero has always been one of the biggest aspects of The Flash mythology that as fan I always enjoyed and the final moments of this episode highlight that affection. In respect to season 5, the ideas of honoring your hero or being blinded by fandom can drive the narrative of the Cult of Cicada. On one hand, you have the love of a city for its hero and their desire to celebrate him; but on the other hand, you have a megalomaniacal murderer that instructs others to murder out of love for that same hero. Exploring this dichotomy would be fascinating and it would be the angle that I would love to see fleshed out.

Now, if the casting rumors are to be believed and the villain that they want to bring to the small screen is Cicada, this version of the character might absorb others life force or murder other meta-humans out of hate to those that have powers which also lends itself to interesting possibilities. The fact that this villain might be able to disable meta-human abilities is fascinating as well, which might be the only point of debate at this point of whether or not the villain will be Cicada. The rumor that I want confirmed is that Mark Pellegrino has been supposedly approached to play this season 5’s big bad. If this is true, I’m going to lose it, whether the role is Cicada or not. One of the things that I am guilty for is being a big Supernatural fan and he is known to have played the role of Lucifer throughout the series. He is amazing as the fallen angel and he would love to see him as a Cicada!

This weeks edition by no means is to be considered a scoop, but a fan’s venture into the Speed Force as he rambles about what the future might hold for The Crimson Comet.

But what do you think: Should Cicada be this next season’s Big Bad? Do you think that The Flash show is ready to introduce The Flash Museum? Would you like to see the show highlight the cop-procedural aspect of The Flash comics more this season? Who do you think should be the villain this season?

And as always, see you at the finish line,