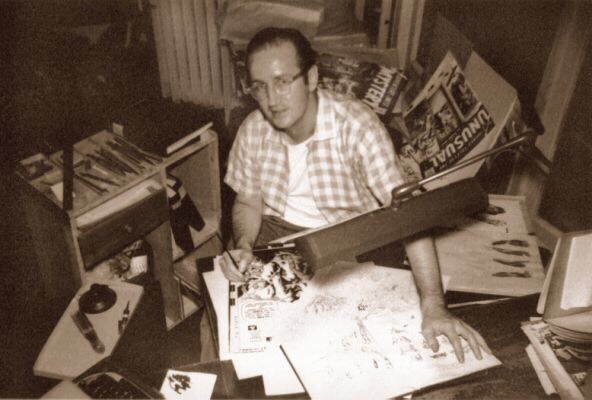 I grew up in the time of Jim Lee, Frank Miller and Todd MacFarlane. They were all great artists, but I never veered away from those guys or their contemporaries until well into high school. Then I got my hands on a Spider-Man action figure that came with it, a reprint of Amazing Fantasy #15. I usually didn’t fare well reading the books of yesteryear, but that cover man.

Who can resist it? So I read it. And I have to tell you. I was blown away.

I was of course familiar with Spider-Man’s origin, having been a fan of the ‘90s cartoon. But this telling seemed more thrilling, more brutal and more honest. I never related or empathized more with Peter Parker then in that story, and it was almost entirely because of Steve Ditko‘s art. It wasn’t true to life, but it was honest. Spider-Man was altogether unique and yet totally relatable. I pored over every panel.

Especially that last one.

It wasn’t just the powerful words, but the image of a distraught Peter Parker, walking away from us. It encapsulates everything that made the early Marvel comics such a success. They were fantastic, but still so hauntingly human and relatable. It is an image that drove home to me that the powerful lesson of power and responsibility was the result of a young man coming to terms with the consequences of his selfish actions, not the wise words of Uncle Ben.

Steve Ditko tapped into the humanity of superheroes and the honesty of their choices. It opened my eyes to the weirder side of comic book art.

Art is power, and it is our responsibility to use it for good, to shake the world with heart the way Steve Ditko did.

Next post Djimon Hounsou Will Play The Wizard In SHAZAM