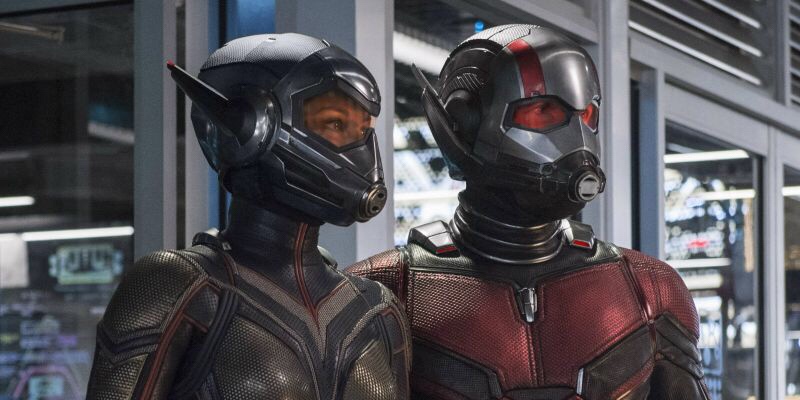 When the first Ant-Man debuted in 2015, most agreed that it was a fun, if a somewhat forgettable picture. The character gained a bigger profile in 2016’s Captain America: Civil War, and fans looked forward to a picture that would capitalize on the potential of the character that was only alluded to in the film. That film is now here, and I am happy to say that Ant-Man and the Wasp is a film with huge laughs and a huge heart.

The film as a whole is step-up from the first. The action sequences feel a little more singular in their vision and perhaps validate that not everything that was thrilling about the first picture came exclusively from departed director Edgar Wright. Almost all of the cast of the first film are here once again to play. Michael Peña once again steals his scenes as Luis, and the always welcome Bobby Cannavale and Judy Greer are allowed to flex their comedy muscles a bit more than the last go around. A strength of this film is that the entire cast has been allowed to move forward in their own personal stories rather then just be relegated to the same circumstance as their last outing. Scott’s old gang are still comedic foils, but now hey run their own business. The relationship between Scott and his ex-wife, and by extension her current husband, progresses from an antagonistic one to a relationship where they are, refreshingly, Scott’s support system as he gets his life together. This progression of character is no more evident than in Scott’s daughter Cassie, wonderfully portrayed by Abby Ryder Fortson. In Ant-Man, she was the precocious, cute kid trope. In Ant-Man and the Wasp, she is given a point of view and heart that allows for some really nice character moments with her father. Also, could we possibly be seeing the groundwork for future in the superhero business?

The already stellar cast from the first film is enhanced with the additions of Michelle Pfeiffer, Laurence Fishburne and relative newcomer Hannah John-Kamen as the central villain, Ghost. With Ghost, Marvel Studios continues their streak of truly great villains, an area where even the most ardent MCU supporter would acknowledge has not been their strongest. Admittedly, it is another variation on the sympathetic villain. This trope could end up feeling repetitive if not done correctly, but it does set the stage for very intriguing dramatic dilemmas. To have an antagonist whose motivation is so arguably pure and empathetic, makes it sometimes difficult to know who to root for. It makes for surprisingly deep storytelling. Her dynamic with Laurence Fishburne is quite touching. And any addition of Michelle Pfeiffer is always prone to lighting up the screen. She’s not in the picture much but I can not wait to see why she brings to future proceedings.

The best thing about the film is the dynamic between Hope and Scott. Scott, while well intentioned, makes rash decisions that breed consequences for those that he loves. He needs someone to check his impulses. One of my favorite moments of the film has Scott asking Hope if she gotten the call to help Captain America, would she have answered. She replies that if she had done so, he wouldn’t have gotten caught. It’s a moment that beautifully sums up to me what I love about their dynamic. Scott is absolutely a hero and a man with his heart in the right place, but doing the right thing is all for naught if you don’t have someone to help you do it the right way. Hope is that person for Scott.

That being said, the film makes clear that Hope does not need Scott in her crime-fighting endeavors. Part of the reason that the dynamic works is that the film positions Hope as the clearly superior hero. She’s just better at this then Ant-Man is. Hope, ultimately, wants Scott as a partner. One could make the argument that the story would be stronger if they found they mutually needed each other, but I quite like Hope’s agency in this dynamic and something I hope to see in future installments of not just this franchise but superhero films in general.

This is film is such a palate-cleanser and respite from the heaviness of Avengers: Infinity War. That, however, should not suggest that you should sleep on this film. It’s an immensely rewarding watch with a lot more heart and brains then I admittedly expected. It’s certainly Marvel’s victory lap after a stellar year, but it’s one worthy of it’s own spectacle.