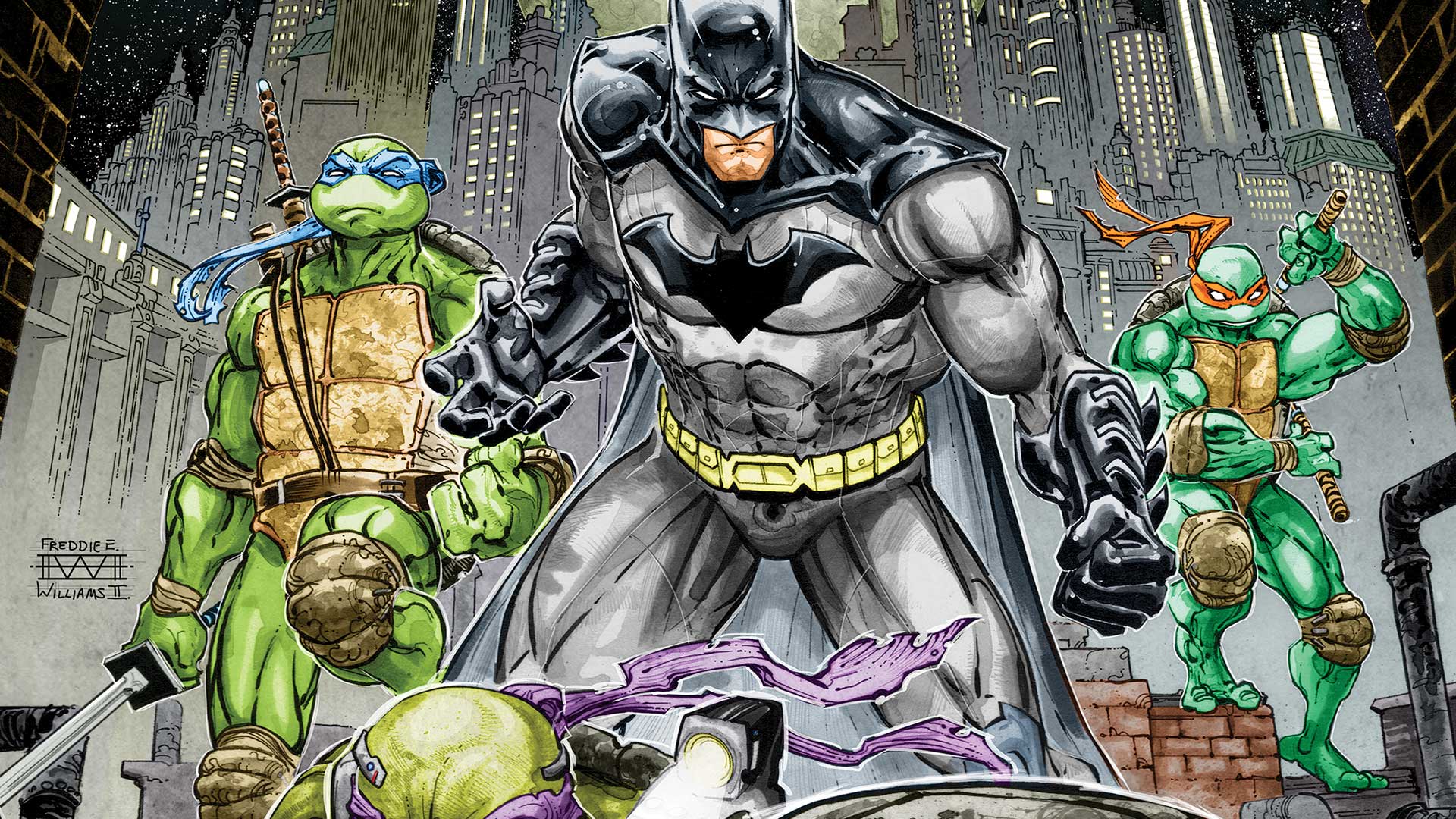 “GOTHAM CITY. From the Penguin to Killer Croc to Ra’s al Ghul and beyond, the caped crime-fighter called Batman already has his hands full protecting his city. Suddenly, a new enemy emerges—the Shredder and his ninja followers, transported to Gotham and unleashed upon an unsuspecting world. Now they’re on the hunt for the technology that will help them return home…and conquer Gotham City in the process with the help of Batman’s deadliest rogues. But heroes come in all shapes, and the Dark Knight does not fight alone. As the Caped Crusader joins forces with Leonardo, Donatello, Michelangelo, Raphael, and Master Splinter, can the Bat, the Rat, and the Turtles take down the most vicious villains from two dimensions?” (DC/IDW)

This is the crossover every child of the 80’s-90’s dreamed of. It took a couple of decades, but The Dark Knight & Teenage Mutant Ninja Turtles, have finally joined forces. For me, it was absolutely worth the wait. A great aspect of this story was that it starts by hitting the ground running. The Turtles and Shredder are already in Gotham City and the explanation is simple and makes perfect sense. During their last altercation, the alien conqueror Krang teleported them away, so he could go about subjugating IDW’s New York and the world unopposed. I’m so glad they didn’t go with the mistaken coordinates while testing their teleportation device story hook. They did that in the crossover with the Ghostbusters (review coming soon) and to go their again, would’ve been redundant. Even the way Batman comes into contact with the Teenage Mutant Ninja Turtles is very practical. They are both on the hunt for Shredder. who is stealing tech that will power the portal to send him home. Of course, this story isn’t just about the Turtles and Shredder getting home. There’s a plot twist for both the TMNT and Shredder. The mutagen in the Teenage Mutant Ninja Turtles is not functioning properly in the DCU and the result is that if Splinter and his green skinned sons don’t get back to their Earth, they will revert back to their normal turtle and rat form, before eventually dying.

Meanwhile, Shredder has designs on traversing both worlds and establishing a Foot Clan stronghold in both Gotham and New York. To do so, he first uses Penguin as his patsy to gain access to the tech he needs to go back and forth between worlds to gather a supply of mutagen. Upon his return, he aligns himself with Ra’s al Ghul, merges the Foot Clan with the League of Assassin’s, strengthening their power base. Then they storm Arkham Asylum and inject all of Batman’s heavy hitters with mutagen, turning them into super strong monsters. Sure the third act, the inclusion of April and Casey and the way the Turtles get home gets a little cliché, yet you won’t care. The final battle, specifically the massive brawl at Arkham Asylum and Batman and The Teenage Mutant Ninja Turtles working together, will wash away any negative feelings you might get at certain points.

My favourite aspect of this book by far, is the character interactions between the Teenage Mutant Ninja Turtles and Batman. Firstly, I love that different universes is nothing shocking or ground-breaking to either of the characters. They’ve both experienced the phenomenon many times, so to force shock and awe would’ve been eye rolling. I love the reaction the Turtles had towards Batman. Michelangelo, Leonardo and Donatello essentially went full fanboy. Specifically over Batman’s costume and gadgets. Donatello loved the holographic 3D imagery and the Bat-Computer, while Michelangelo wanted to drive the Batmobile and ride the giant dinosaur in the Batcave. Meanwhile, Leonardo and Splinter were very impressed with his martial arts ability. Their reactions were absolutely hilarious. Their reactions would essentially be me on set of a Batman film, meeting Ben Affleck or whoever takes his place, while he was in full costume and still in character. (Make it happen WB!) Raphael wanted nothing to do with Batman at first (typical Raphael). He sees Batman as a spoiled rich guy who only fights crime for the adrenaline and fun of it. He resents him because he and his brother were born in the way of the ninja and have to fight just for survival. To turn Raphael’s opinion around, Batman takes him to Crime Alley, recounting the story of his parent’s death. He tells Raphael that the reason he is Batman, is to prevent families like the Teenage Mutant Ninja Turtles, from going through what he did. This was an incredibly emotional scene. When you actually read the dialogue and see the imagery, I guarantee you that emotions will flow. I also really liked the pairing of Shredder and Ra’s al Ghul. This version of Shredder has his roots in reincarnation and Ras al Ghul has the Lazarus Pit. So they both have that quasi eternal life thing going on. They are essentially the mirror version of each other on their respective universes.

Freddie Williams II is the artist on this book and his work is INSANELY fantastic. His art is more stylized, in the sense that the characters are highly muscular. This is by far the best drawn version of the Teenage Mutant Ninja Turtles in comic book form, in my opinion. I got all nostalgic because the turtles look a lot like the ones from the movies in the 90’s. Batman looks quite a bit like his Arkham Asylum video game counterpart. The longer ears and the more armored costume certainly point to that aesthetic. I really appreciated that the artist drew more than one Batmobile and that each one he drew was inspired by a previous Batmobile from the comic books, instead of the films. The Batcave was massive and all tricked out with Batman’s wonderful toys! Easily the best Batcave image, is seeing Michelangelo ride the giant dinosaur. That image and the pure glee Michelangelo has on his face reminds you how fun and escapist comic books can be. As I said, there is a massive brawl at Arkham, between Batman and the Teenage Mutant Ninja Turtles against Mutagen infected inmates. It was chaotic, action packed, and very detailed. Every animal that the villains turned into fit their character. Seeing Riddler as a fox, Bane as an elephant/mastodon, and Joker as a snake, made for some pretty wild imagery. My favorite animal transformation was Poison Ivy, who became a humanoid Praying Mantis, which is an absolutely PERFECT analogy for that character. A key to a successful Batman artist is his ability to draw Gotham City, the DC Universe earth’s most dangerous city, and make it look so good, that I still want to live there. In that regard, Freddie Williams II is a stellar Batman artist. The scene with Penguin and Shredder overlooking the Gotham Harbor was beautiful, even though it feature so much evil.

There’s a comic book trend, I’m noticing on a personal level. That is, that the crossover comic books I’ve been reading are the best of the comic books I’ve been reading. I’ll admit, I enjoy this crossover slightly more then the one with the Ghostbusters. However, that’s because Batman and the Teenage Mutant Ninja Turtles were absolute favourites of mine as a child. Read both and make up your own mind. There’s another TMNT/Batman crossover set in this continuity and the animated universes, as well as a Justice League/Power Rangers crossover on the way. Look for my reviews on both here soon.