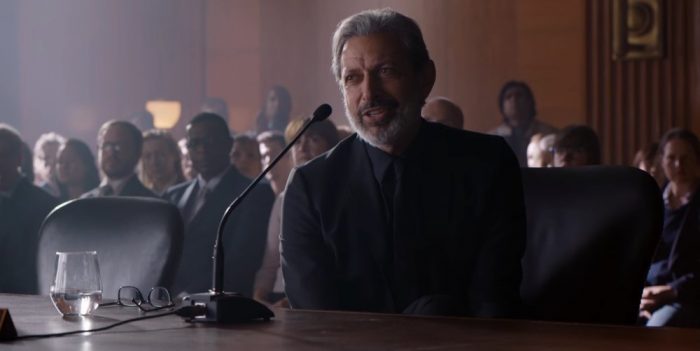 One of the exciting casting announcements for Jurassic World: Fallen Kingdom was Jeff Goldblum’s return as Dr. Ian Malcom.

With Fallen Kingdom‘s release imminent, fans are already curious to know if Goldblum’s appearance in this film means we could see him return in a bigger role in the third Jurassic World flick. Goldblum told Collider that he’d like to come back if the filmmakers want him.

Who knows? I’m curious about it. If nothing else happened, I’d be entirely satisfied and nourished and lucky and thrilled to have done all of this. If I can be of any service, that’s my posture and authentic feeling. I’ve kind of nosed around, ’cause I’ve had such a great time, and [Jurassic World 3 director Colin Trevorrow’s] so good. We did that Jeep commercial, he directed that. He’s awful good. I’d like to work with him more on anything. I can imagine, but it’s up to them. Steven Spielberg and Colin Trevorrow and Emily Carmichael, who I think is writing the script with him.

Who knows? Who knows where I’ll be in 2021, if I’m sitting up and taking nourishment, and able to contribute? I’d love to, I’ll bet. We might be right back here. And then, yes, we can talk about, ‘Well, Jeff, did you ever think we talked about the last one that you’d be in this third one?’

While development for Jurassic World 3 is in its early stages, Goldblum returning would certainly be cool to see and would get fans excited for the next installment. Goldblum’s charm and charisma helped make Ian Malcom a fan-favorite in the first Jurassic Park and to see him again on the big screen would be a real treat.

Would you like to see Jeff Goldblum back for Jurassic World 3?