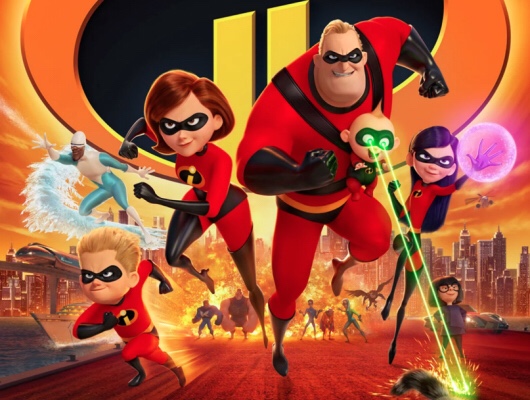 It’s been 14 years since the last Incredibles. In that time Pixar has given us 3 Cars films. Their apology for all that has premiered this weekend, Incredibles 2, and I’m happy to see that it was worth the wait. So Pixar, apology accepted!

Our story picks up right where the first film ends, which sends the Parr family on a mission to stop the Underminer. The results of said mission set the stage for the central question of the story, should superheroes be legalized again?

The film smartly focuses on Elastigirl (Holly Hunter), in a clever reverse of the first film’s story. When she, Frozone(Samuel L. Jackson) and Mr. Incredible (Craig T. Nelson) are recruited by Winston Denver (Bob Odenkirk) to revamp the image of superheroes, he deems Elastigirl as the best play to start of the campaign, due to her low property damage numbers. It’s a very clever plot device that is used to great effect and rings very true given the current state of comic book films.

Mr. Incredible meanwhile is charged with his most daring mission yet. That of a stay-at-home dad. For me this material is some of my favorite of either Incredibles film. It’s a master class in humor, and watching Bob Parr wrestle new foes such as teenage angst and Common Core Math is nothing less than charming. The really comedy MVP awards goes to Jack Jack however. With his happy go lucky attitude and seemingly limitless, budding powers, he steals every scene.

The remarkable thing about Incredibles 2 is how well it’s able to carve it’s own place in the superhero film canon. There is some meta humor to be sure, but most films starring original heroes not found in the pages of DC and Marvel tend to be send-ups of the genre. Not so with the Incredibles films. These characters are relatable, human and are very easy to root for when they it comes time for the super heroics. It feels classic and yet so relevant at the same time. I’m very excited to see what’s in store for the Parr family next.

Just don’t make me wait 14 years for it.

And no more Cars movies.