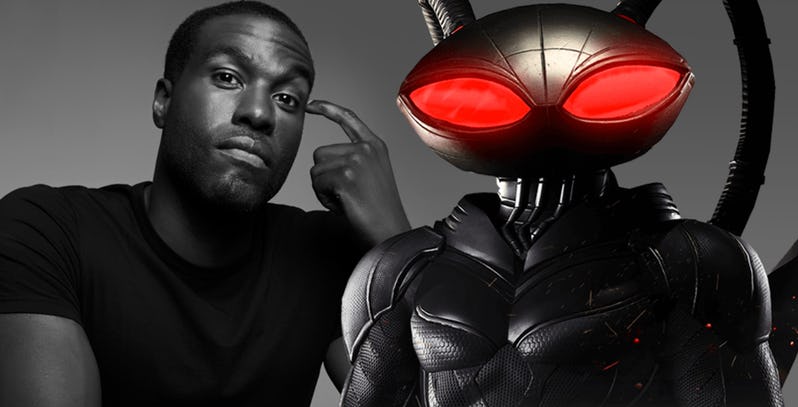 Following his recent quip about how “they’re just gonna talk,” Aquaman director James Wan has once again spoken with Entertainment Weekly about his upcoming DCU film. This time, however, the filmmaker has given fans an exciting first look at one of the film’s villains– Black Manta, played by The Get Down‘s Yahya Abdul-Mateen II.

When asked to give details about the villain, Wan opted to play it coy by saying, “He’s part mercenary but full-time pirate who in his suit will look like some crazy alien from outer space.” The description absolutely fits the character’s classic costume design, which fans were able to get a small tease of in the accompanying official photo of Abdul-Mateen in the role, which shows the villain working on a prototype of the outfit.

However, Wan was also quick to note that Black Manta isn’t the main villain of Aquaman. Instead that role will be filled by Patrick Wilson’s King Orm, also known in the comics as Ocean Master. Wan elaborated, “Black Manta is a really interesting character who is somehow factored into this story but our main story is about Jason and Patrick.” However, provided that Aquaman turns out to be a success, it wouldn’t be a stretch to wager that Black Manta will continue to play a part- or even transition up to the main villain role- in future sequels.

Personally speaking, I love how accurate Black Manta’s prototype mask looks to the comics. While I am normally open to seeing more creative liberties taken with film adaptation designs, there’s just something endearingly goofy and unique about Black Manta’s costume that makes me happy to see Wan and his team stick with the look on the big screen.

What do you think? Do you think Wan and his production design team did a good job in bringing Black Manta to life? Are you excited to see Aquaman later this year? Whatever your thoughts are, be sure to share them with us down in the comments section below!

Next post STAR TREK: DISCOVERY Has A New Showrunner