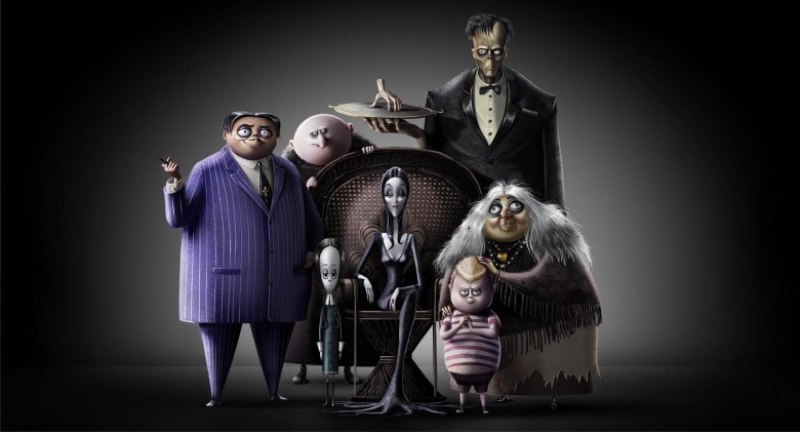 The theme song for The Addams Family is iconic. The lyrics, the melody and those perfectly timed snaps. You’re all thinking it and I’m thinking it right now as I write this article. And that song is scheduled for a widespread return on October 11th, 2019 when MGM releases its animated film reboot of the franchise, co-directed by Sausage Fest duo Conrad Vernon and Greg Tiernan.

According to Deadline Hollywood, the film’s script (penned by Matt Lieberman) “follows the kooky Addams family as they face-off against a crafty reality-TV host voiced by Janney while also preparing for their extended family to arrive for a major celebration, Addams-style.”

Vernon said in a statement:

“Greg and I have always been a fan of the Addams Family in past versions, so when we set out to make this movie, we were excited to do something new. With that in mind, I drew from the brilliantly original Charles Addams New Yorker cartoons for the look of the film and decided to tell the story of how Gomez and Morticia meet, find their house and start their family. This unique approach is what drew me in to direct the film. The reimagining also extends to the stellar cast we’ve put together who will each bring their own spin to our film that will appeal to longtime fans of the Addams and introduce them to a new generation.”

“Conrad and Greg are masters of animation with the keen ability to create something both kids and their parents will enjoy for different reasons. Adding to that a world class caliber of talent with Oscar, Charlize, Chloë, Finn, Nick, Bette and Allison – we can’t wait to bring their fresh and modern take on The Addams Family to the worldwide audience.”

What do you think? Personally I’m excited. Anything that’s all about that good old Gothic Horror/German Expressionist art style, stars the likes of Oscar Isaac, Charlize Theron and even features Bette Midler in it is right up my alley. But again- what are your thoughts on the cast? Be sure to share them with us in the comment section down below!

Previous post Jared Leto Reportedly Getting His Own Joker Solo Movie? Not So Fast!