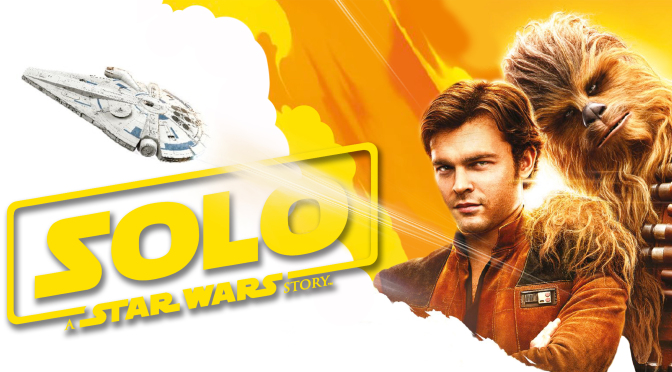 The title of this piece is a bit of a mischaracterization. Solo: A Star Wars Story as a film is not a misfire, not even close. It’s an entertaining movie that does an adequate job of examining the history behind the galaxy’s most charismatic smuggler. As a Lando fan, I’d say second most, but that deviates from our overall point.

The issue with Solo is it’s burdened by history — both ancient (as if the 70s were ancient) and recent. Harrison Ford’s time in the Falcon is definitive. Generations have come to know and love his Han. He has been that character to people of all ages for over forty years. Star Wars — just like Indiana Jones or The Godfather — is timeless. Ford is Han, just as he is Indy.

Was it unfair to expect audiences, who over the decades have built the connection of Ford to Han Solo, to generate excitement to see someone new take command (More on this later)?

It shouldn’t be. We should be excited to see our favorite scoundrel on one of his unexplored adventures. Maybe the reason we’re not is threefold. *Note: There is clearly more to Solo’s box office bumble than this, but I feel these are some important elements to its struggle.

We’re overindulged now. Since its triumphant return, like the Jedi, we’ve had four films — and this will also be brought up later — that fall directly within the same timeline. It took nine years for the three prequel films to play themselves out with a three-year interval between each stilted mess (Unpopular confession: I still love them!). Yet it’s only been five months since The Last Jedi left a schism between fans. One cannot underestimate the damage to the brand the divisiveness of that film had with the casual moviegoer.

Hardcore Star Wars nuts will always go, just as the hardcore DC nuts did for Justice League, but Disney cannot expect that tenant to be true for people who head to the movies to have fun. I’m not here to heap any more dirt onto The Last Jedi. If I did not mention it’s icy reception, though, I’d be doing this piece a disservice.

There was almost no time for people who did not enjoy that film to get over their disillusionment. That, I’m sure, will certainly not be the case by the time Episode IX rolls around. Solo was the sacrificial lamb to a disenchanted public’s slaughter.

For better or worse — and often times, with the toxicity and entitlement of many fans, it is worse — people will refuse to even give an actor filling such sizable shoes a chance. That element of it, as I mentioned before, is a shame. Alden Ehrenreich does a more than sufficient job in the role, not an easy task with the overwhelming weight of expectation that came with accepting it.

His penance, or burden rather, was overcoming those odds. Like the character he played, I’m sure someone informed him how long those would be. A larger point that I won’t really explore fully here is sort of the absurdity of that. Harrison Ford is not magically going to get younger. Worse, de-aging effects are often creepy and pull viewers from the experience far more than a new actor. Again, why can’t we just embrace a new Han?

The answer to that may lie in the fault of the series itself. The Star Wars film universe is plagued by its slavish commitment to never deviating from a central path. It’s not even six degrees of separation from Anakin Skywalker; you’d be hard pressed to go beyond two.

Perhaps now — especially considering the current wealth of projects — that will change. But it hasn’t yet. Thus, having just seen Ford reprise one of the iconic roles he’s ever played, it was not the time to force a new actor into the part. Why not wait?

If Han does not appear in Episode VII, there is not that same familiarity. We’d just gotten him back. All the feels!

In a way, it’s comparable to Andrew Garfield swinging into the red and blue tights of Spider-Man. The public’s appetite for it didn’t exist. The deep, festering wound of Topher Grace’s Venom had not healed.

The difference — and it is a consequential one — is that with each new actor inserted into a Superhero role, we also get an entirely new version of the world that surrounds them. Bale’s Gotham is not Affleck’s Gotham. Reeve’s Metropolis is not Cavill’s. The bit players may have remained the same after Burton left Batman, but Schumacher’s version wasn’t remotely similar. It was awful and off-putting and the less said about it the better.

There is no sense of distance between these portrayals. We’ve been following a relatively straight route. Characters, no matter where in the galaxy they may be, consistently intersect. This isn’t a new version of Han in an entirely new galaxy far, far away. It’s Han at a younger age. Thus, envisioning anybody but Ford assuming the role is probably more difficult. Again, it shouldn’t be, but that is the danger of not utilizing the massive depth there is to Star Wars. Over 10 films, they have covered 60 years, give or take, and all of the films lead to where we are now.

Peppering in stories outside the Skywalker arc would’ve done much to create the separation necessary to give this story room to breathe.

That is a luxury it desperately needed. Recasting the role was always going to be a tough sell — that is a tribute to how well Ford executed it — but the failure of the film should not be an indictment of Ehrenreich, or any of the other cast who all shined, too. Each of the listed symptoms for its box office debacle were avoidable.

In the end, no matter its quality, the public simply did not seem to want this particular movie at this particular time. That’s not to say that they would never want it, but in the future Disney would be wise to understand what types of Star Wars stories people are clamoring for. By all means, continue to mine this huge portion of the lore, but intersperse fresher things in between.

ALSO READ: “RTF Film Review: ‘SOLO: A STAR WARS STORY Made MFR Go From NOLO To YOLO, So Go, Yo!’“

One thought on “RTF Original: “Solo: A Star Wars Misfire””

Previous post RTF Film Review: ‘SOLO: A STAR WARS STORY Made MFR Go From NOLO To YOLO, So Go, Yo!’

Next post Tom Cruise Feels The Need In First Photo From TOP GUN 2!