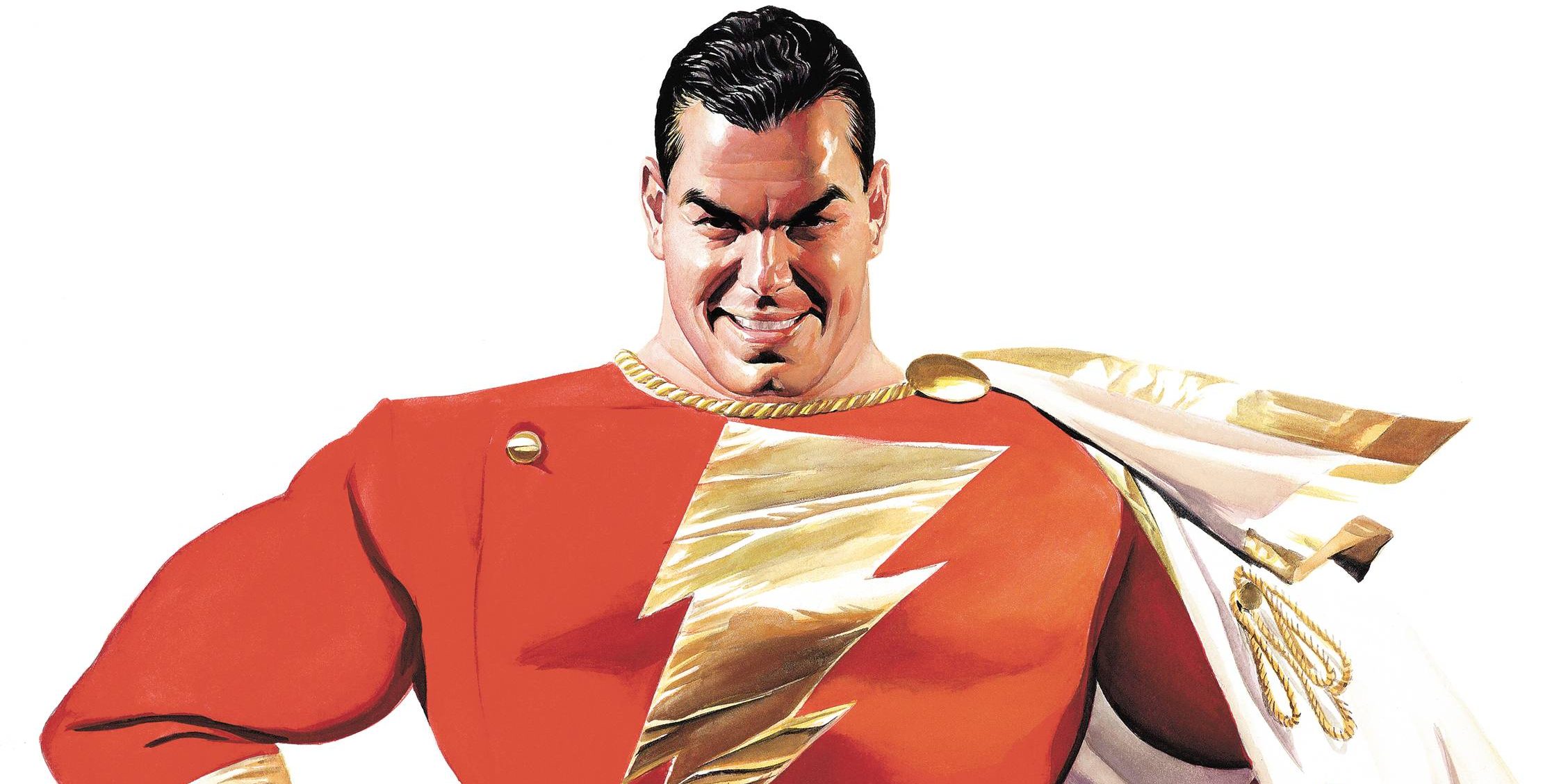 Last week, RTF Editor-in-Chief Mario-Francisco Robles published a column about the ways the Shazam! movie could take a page out of Deadpool’s playbook (and seems to already be doing so).

Afterward, he reached out to a well-known online Shazam! super fan, known on Twitter as Captain Marvel Talks to see what he thinks of the current direction for the film.

Check out this submission, where he insightfully and authoritatively sets the record straight on the tone Shazam! should strike.

I think I see where you’re coming from.

You seem to be saying that you find the way Zachary Levi is promoting the Shazam! movie to be similar to how Ryan Reynolds might promote Deadpool, i.e., they are making fun of comic book movies to show how funny their movie might be.

Which is probably why you see the Deadpool vs Shazam! movie promotional comparison, so to speak.

And I do agree the marketing isn’t likely to be something that fans have seen much of:

But I think that’s where the similarity ends.

I think what you saw from Levi’s post of that fan-edited photo was him enjoying a good joke (and making one himself) rather than what New Line Cinema’s actual sales pitch about the Shazam! Movie is.

And I think it’s pretty clear what they’re trying to sell:

Big, but with superpowers.

And that’s something they’ve been saying for years that it will be, dating all the way back to 2007, when John August was tapped to be the writer for the Shazam! movie.

That alone will be way different from the kind of humor we saw in both Deadpool movie, where it’s done more so with humorous characters, rather than with humorous moments. That, and Deadpool’s humor is aimed more towards an adult demographic than Shazam! movie’s demographic, which is aimed more at kids and possibly the pre-teen crowd.

If anything, I would think the promotion and the actual movie is going to be something more like what we saw with Spider-Man: Homecoming.

Having said that, here’s my perspective as a long-time Captain Marvel fan:

I disagree with and question the wisdom in having the Shazam! movie being predicated on the concept of Big, but with superpowers.

I spot five problems with this.

But before I get to that, you are right: They’re doing it to appeal to fans who aren’t familiar with Captain Marvel and to try and further distinguish (an already distinctive character in) Captain Marvel from Superman.

That, and it’s also being done to give fans the sense of Captain Marvel as a comedy character. That brings to me to the first of the five problems I have with making Captain Marvel, Big, but with superpowers.

1. Captain Marvel is not a comedy character.

Otto Binder, the man who wrote what C.C. Beck estimated was about 90% of Captain Marvel’s adventures in the golden age of comics, once said:

“The secret of it all was that Cap and Billy were dead serious and never made a joke at all.”

“… Captain Marvel and Marvel Family stories aren’t humor in the strictest sense but rather satire and parody of life situations and the doings and shortcomings of humans.”

No, a highly accurate description of Captain Marvel would be that he’s essentially Tintin, a young boy who, with a magic word, became Superman, an adult superhero with powers far beyond those of mortal men.

2. Billy Batson is already inherently mature for his age.

Going with a “Big, but with superpowers” route will rely heavily, if not exclusively, on the archetype of an immature man-child. But doing so forgets that Billy Batson is already and inherently mature for his age.

Allow me to elaborate:

Before the age of 12, Billy Batson was an orphaned child who had his inheritance stolen and was kicked out by his cruel step-uncle. Left with nothing, Billy Batson had to survive in a city of millions completely on his own. To do so, he had to grow up awfully fast.

Moreover, at that same age, Billy Batson got himself a job as a radio reporter and he parlayed that into a career as a self-made radio celebrity. To be able to get – and keep that job – Billy’s maturity would have to belie his age.

On top of all of that, here’s the something just as important to remember:

Billy Batson didn’t get his powers by accident; he was chosen.

This wizard bestowed upon Billy Batson the vast powers of ancient figures (with one of them being THE WISDOM OF SOLOMON).

Billy Batson was chosen to do a job where he would be called upon to selflessly save and defend the world everyday, Billy Batson was tasked with doing it with no reward or thanks; To be mankind’s protector. That’s a huge responsibility. The entire world would be at this champion’s mercy.

Would you, a 5,000-year old wizard, choose such a champion if he was immature?

I daresay that if Billy Batson had been immature, that it would have been grounds for disqualification. Thus, when you factor in Billy Batson’s backstory, the internal logic of it dictates that even if you go with a Captain Marvel who possesses young Billy’s mind, it would contradict the immature man-child angle, rendering it essentially harder to believe than a man who can fly.

3. Captain Marvel is the ultimate metaphor for the inner child (and being an immature man-child contradicts it.​​)

Writers in recent years tend to have this urge to make Captain Marvel an immature man-child. They seem to think that immaturity makes a character a lot more fun and interesting.

But they’d be wrong.

Does being an adult make you less fun or less capable of being fun? No. Why not? Because maturity does not preclude having an inner child.

Take a moment to think about that, because that is a powerful truth to behold once you realize it.

The inner child is the source of our child-like wonder, that innocent sense of awe and fun. It would be easy to confuse having an inner child as being immature, but nothing could be further from the truth. The older we get, when we indulge our inner child and get in touch with our child-like awe and sense of fun, we grow, and that is what maturity is all about.

Billy Batson is who he really is.

Why else do you think Captain Marvel is the paragon of brightness and optimism that he is, arguably more so than Superman?

Fawcett Publications knew this. The proof is in the whimsical nature and tone of Captain Marvel’s stories and this was a huge factor in them making Captain Marvel the undisputed king of the Golden Age.

So, when Captain Marvel is portrayed as an immature man-child, the very metaphor that he so adequately represents is defeated.

4. Making Captain Marvel an immature man-child uses only half of the very wish fulfillment that makes him so appealing.​​

The vast powers are only half of the equation when it comes to Captain Marvel’s wish fulfillment appeal. It’s not just that with a magic word, a kid gets to have vast powers bestowed upon him, it’s that he gets to be a grown-up.

Every kid has fantasized about being an adult at one point or another in their life. I did, and I’m sure just about everybody else has.

It was this aspect of the character’s wish fulfillment appeal that his original creators had intended, and it was a powerful component that made Captain Marvel so appealing. Just imagine it, with one magic word (“SHAZAM!”), a kid could be a grown up.

Yes, it’s as wonderful as it sounds.

There are already Captain Marvel-like characters similar to or based on Captain Marvel where the sole idea behind them is that they would behave and think like a young boy even after they transform into their adult form. One such character is Prime, from Malibu comics. Another is Superior, from Icon Comics.

There are more, but the point is that Captain Marvel came first, so it really would be disingenuous to make him into someone like Prime, a character that was BASED on Captain Marvel, but with the added twist of being an immature man-child.

Will the average movie-goer or even the general comic book fan know this or even pick up on this? Not likely. Will they care? Probably not. But fans like myself will. And I do so from the perspective of wanting what’s best for the character.

I mean, it’s great that we’re getting a Shazam! movie, but I also care deeply about how he’s portrayed. It feels to me that they’re selling their take on the character more so than actually making a sincere and genuine attempt to portray the character as he was intended to be and when he was at his best.

And that worries me.

Of course, I can only speak for myself. There are some long-time fans who feel the same way I do, but there are many who don’t and love that it’s Big, but with superpowers.