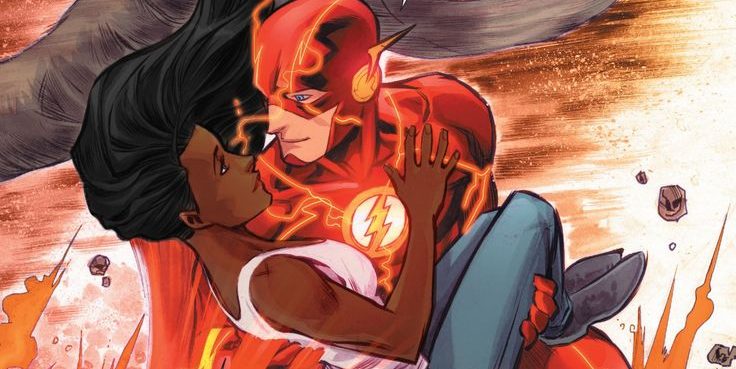 On last week’s El Fanboy Podcast, I got a little carried away discussing all of the different DC projects that seem to be higher up on the Priority List than Matt Reeves’ The Batman, and I somehow managed to forget to mention The Flash. But it’s true, a film about the Scarlet Speedster seems to be coming along much faster than another film about The Dark Knight (and maybe that’s a good thing?). Today I’ve got a pair of fresh updates on the project, and it’s pretty exciting stuff.

For starters, after some back-and-forth in recent months about whether or not John Francis Daley and Jonathan Goldstein were indeed locked in to direct The Flash (which I’m no longer calling Flashpoint, despite no official word from WB cause I’m just a rebel like that), star Ezra Miller has revealed that he’s already taken a meeting with them and indirectly confirms that it’s all systems go with the duo behind this year’s Game Night.

There’s also news with regard to who’s playing Barry Allen’s love interest Iris West in The Flash. See, Kiersey Clemons was cast in the role and yet her future has been in question ever since her sequence in Justice League was cut. Clemons was cast by then-The Flash director Rick Famuyiwa, and her scene in JL was going to plant seeds for the eventual solo movie. But when Famuyiwa exited the project mid-way through the production of Justice League, it was decided that her scene was no longer needed.

The decision to cut that sequence led to all kinds of uncertainty as to whether or not we’d see her in the role. There were even rumors that the studio was digitally replacing Clemons in the scene, only to back off on that idea in an attempt to avoid a backlash. So it seemed very possible that Clemons’ tenure as West would stop before it even began, similar to how Shailene Woodley’s scenes as Mary Jane Watson were cut from The Amazing Spider-Man 2 and- with that franchise getting scrapped and rebooted- we’d never actually get to see her as the iconic character.

Well, as it turns out those fears are unfounded by Clemons revealed on Conan yesterday that she was, indeed, still set to play Iris West in The Flash:

“Imagine if I said no. Imagine if I was like, ‘I’m cut out of the whole thing.’ We talked about it though before so that’s not going to happen. I know I’m going to be in The Flash … Yeah, I’m Iris West.”

So things seem to be moving along rather nicely for The Flash. The star has met with his new directors, his love interest is locked in, and the film has been in the news a lot lately, which would indicate that there’s definitely behind-the-scenes momentum being built up for it.

Are you excited to hear that The Flash is moving forward? Relieved to see that Clemons will get a chance to show us what she’s got as Iris? Sound off in the Comments below!