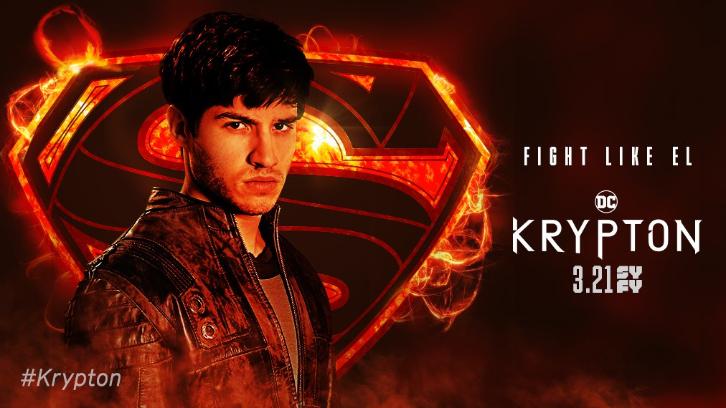 “A resistance movement begins to form to impede the Voice of Rao’s increasing power and influence.” (SyFy)

I felt let down by last weeks episode of Krypton, but this episode renewed my faith in the show. We’re taken back 2 weeks prior, to when Seg-El first met Adam Strange. In this flashback, we see where Adam Strange went, when he zeta beamed off screen. He appears to be in the corridor of a Rannian ship, defending his reasoning for “borrowing” the Zeta Beams. After hearing him out, Sardath and Alanna agree to allow him to keep the device and carry out his mission, of saving Superman. While we only hear their voices, I’m so glad the show used these two figures from Adam Strange’s mythology. Alanna of course is the love of Adam’s life and Sardath is her father. As a fanboy, I thoroughly enjoyed them mentioning how he always ends up disappointing them, when he vows to do something. It’s a nerdy deep cut about Adam and Alanna’s relationship. As a huge fan of Superman, it was also pleasing to hear Alanna and Sardath refer to Superman with such reverence. It highlights Superman’s importance and meaning to a universe at large, extending beyond both Krypton and Earth.

This episode of Krypton offers clarity on a situation I was somewhat unsure about.  That being, if the Voice of Rao had somehow become Braniac, or was one of his sentry’s. The answer is that the Voice of Rao is indeed a Sentry, not Braniac himself. To keep himself powered up, the Sentry uses it’s tentacles to plug into the birthing Matrix, sucking up the energy of the unborn embryo’s, basically killing those unborn children. While nothing gruesome was shown in this scene, knowing that’s what he’s doing, was severely disturbing. This was the moment the show dipped its toes into Game of Thrones waters. Krypton’s resistance group, comprised of Seg-El, Nyssa-Vex, Lyta, Jayna and General Zod, plan to use this ritual to their advantage, as it weakens the Voice of Rao. To do this, they seek the help of more soldiers, and turn to the leader of Black Zero, Jax-Ur for help. Jax-Ur in the comics, is a criminal deviant and a scientist. I don’t know if the scientist angle was covered, but the deviant aspect is present, given she is the leader of a terrorist cell. The biggest difference is that in the comics, Jax-Ur is a he, and here, the character is a she. Ultimately, that doesn’t matter, because actress Hannah Waddlingham does a phenomenal job, playing an imposing, and demanding militant leader. I like the addition of the animosity and power struggle for power and control of Krypton, as opposed Jax-Ur being an underling to Zod. Jax-Ur agrees to lend Zod her military forces, if he agrees to hand over Daron-Vex. The two temporarily agree to join forces.

With their numbers replenished, they now look to separate the connection between the Voice of Rao and the Sagitari he’s brainwashed. To do this they perform a procedure on Dev-Em, his closest soldier, with Fortress technology, that separates the connection between the Voice of Rao and all his soldiers. I didn’t care for this plot point, as it seemed too contrived and convenient. Also, it seemed as though Dev-Em was truly dead after last episode. To have him just be lying unconscious in the Outlands, cheapens Lyta’s act of saving her mother, in my opinion. Still, their planning was a success and an attack is made on the Genesis Chambers. The Voice of Rao is shot, seemingly falling to the bottom of the Abyss to his death. However, the Voice of Rao reveals himself to Ona, the little girl he took in, a couple episodes ago. He sends her with a bomb attached to her to the bar where our heroes are reconvening. As the bomb is about to explode, Adam Strange uses his Zeta Beam tech to teleport he and Ona out of the bar, just before the explosion. It was nice to see Adam Strange acting like a hero again, as opposed to the whiney, attention seeking glory hunter he was last episode of Krypton. While Seg, Lyta, Nyssa, Jayna and General Zod, were saved by this act, what happens to Adam Strange and Ona, is a big WTF moment, which I refuse to spoil, until next episode.

Krypton was back on solid footing this week and as a result, the quality of the episode soared. I expect the final two episodes to be as explosive as this one. Here’s hoping a Season 2 is on the way.

Next post Henry Cavill On The Infamous JUSTICE LEAGUE Mustache: ‘You Can’t Win Every Time.’