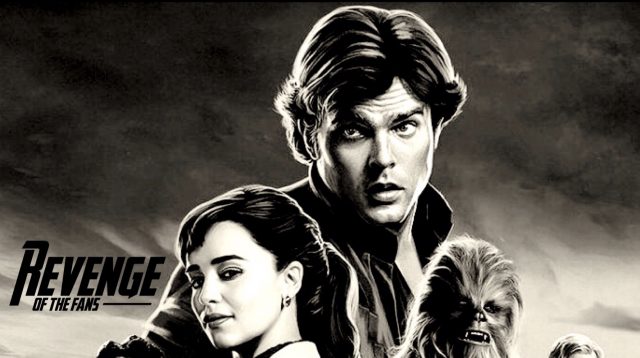 When Ron Howard came on to “finish the last couple of weeks of principal photography” for Solo: A Star Wars Story, the initial understanding was that he was merely going to complete the film. If you recall, the film’s directors at the time (Phil Lord and Chris Miller) were only two weeks away from finishing filming when they were suddenly axed by Lucasfilm. Then, as Howard came on and his work would go on to last a few months instead of a few weeks, it got people wondering just how much of the film he was shooting.

In the time since, the consensus has shifted. Solo: A Star Wars Story evolved from a film spoken of us “Lord and Miller’s movie, with Howard’s steady hand there to smooth the edges” into “It’s basically a Ron Howard movie now.” So instead of asking how much of the film is Howard’s, the more pertinent question is how much of the final cut is actually from the original directors, Lord and Miller.

According to the Wall Street Journal (via CinemaBlend), which isn’t exactly some fanboy blog, we may have a very interesting answer to that question:

WSJ has a source that claims that Lord and Miller’s footage accounts for 30% of Solo: A Star Wars Story.

Of that 30%, you can safely assume that a lot of it is stuff that was shot for action sequences. Why can you assume that? Because the main reason Lucasfilm sacked the directors was because they didn’t care for the way they handled dialogue-driven scenes. It’s been reported before, but WSJ’s source repeats the idea that Lord and Miller took way too many liberties with Lawrence and Jonathan Kasdan’s script and kept pushing the actors to do more and more takes while improvising far beyond the written word.

It calls to mind what happened with Rogue One: A Star Wars Story, where Tony Gilroy was brought in to redo all of the connective tissue for the film while leaving Gareth Edwards’ action sequences primarily untouched. A big difference? Edwards still got the sole director’s credit, while Gilroy got a screenplay credit- with his extensive work primarily being kept under wraps (outside of one really annoying MF’r who wrote a ton about this in an attempt to to expose the truth at his old site…ahem).

While fans may be quick to compare this Solo: A Star Wars Story situation to what happened with Justice League, there are a couple of huge differences. Just in case you somehow don’t know what I’m referring to, Justice League director Zack Snyder was discretely shown the door during the film’s post-production and Joss Whedon was brought on to do extensive additional photography and reshoots. This led to folks playing a game of “Who Shot What?” while watching the film in theaters. And, considering we now know that a third of Solo is the work of Lord and Miller, comparisons will definitely be made and that game will likely be played.

But here’s what’s very different and unique about this situation, when compared to Justice League:

To their credit, Lord and Miller have been very diplomatic about things. They didn’t even challenge the Director’s Guild for the credit. They agreed Howard deserved to be listed as the film’s director, and they opted to take Executive Producer credits instead.

The crazy part of all this is that Lucasfilm and Howard seem to have pulled this off. The early buzz on the film is decidedly positive. While our friend- and avid Star Wars fan- Dave “Da7e” Gonzales wasn’t all that impressed, most of what I’ve seen about Solo: A Star Wars Story is very positive.

Here’s a smattering of what’s being said, including Da7e’s Meh response:

There are some great characters and moments in #Solo. It’s the roughest, shaggiest of the new Star Wars movies. Didn’t work for me, but it sounds like it’s working for some other Star Wars fans and I’m happy for them. I want more L3 and Enfys Nest as soon as possible, please.

#SoloAStarWarsStory: It takes a bit for it to find its feet and for AE to turn on enough charm to make you forget he’s not HF. But once it kicks into its hey-let’s-make-a-crew and yes-also-do-a-heist stuff, it totally flies.

Solo is straight-up overflowing with winks, but lots of great action. And just when I was thinking, “There’s no way to spoil this movie,” well — enjoy that bit.

I loved #SoloAStarWarsStory so much. It’s a western. A caper. Funny with so much heart. It’s got so much surprises that fans are going to love. Donald Glover is charming x1000. Alden Ehrenreich is a great #HanSolo and just know I’ve been saying this for years! Fave new #StarWars.

#SoloAStarWarsStory was a mostly fun adventure and solid performances but with a predictable story. Never will be one of my favorite #StarWars movies but I enjoyed enough of it.

I’ve said it before, but it bears repeating: Every ounce of behind-the-scenes drama will be forgotten as long as the final product is well-received.

These new Star Wars films, since Disney’s acquisition, are proof of that since every single one so far (outside of The Last Jedi) has had some kind of behind-the-scenes issue (scripts tossed, directors replaced, release dates delayed, extensive reshoots) and yet the movies and Lucasfilm have somehow managed to emerge unscathed in the eye of the public. And that’s because, at the end of the day, as long as you succeed in satisfying their hunger…audiences don’t care how many cooks were in the kitchen.

Ok, I’ve got a DC Bochinche-centric episode of the El Fanboy Podcast to record. Catch you later, Revengers!

Next post AUSTIN POWERS: Could We Have A DR. EVIL Movie? Mike Myers Hopes So.