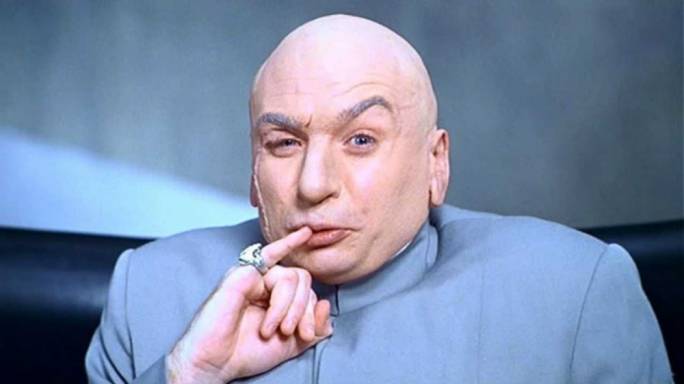 Dr. Evil will always have a place in the hearts of Austin Powers fans as he was the embodiment of of every James Bond and Rocky and Bull Winkle villain, but we never got to know his story the way we did with Austin Powers, both played by Mike Myers. Well, there is a chance that we may get to see the scarred genius come center stage in a movie of his own. Mike Myers recently expressed his interest in bringing back the bald master mind after 16 years of his on screen absence. In an interview with ET he shared his thoughts on the possibility of bringing Austin Powers 4 to theaters in the future,

“I would love to do a movie from Dr. Evil’s perspective. So it would be Dr. Evil 1, Austin Powers 4, is how I would roll…”

A movie done from the perspective of the memorable villain would be a dark comedic change from the groovy image of hippy love and shagging that the secret agent Austin Powers conveyed but would still be a story worth watching. Sadly, it would be without another memorable character that became an instant favorite, Mini-Me, who was played by the late Verne Troyer who passed away last month.

It suddenly makes a little more sense why he dusted off the old Austin Powers for a recent episode of Saturday Night Life now, doesn’t it? How would you feel about a Dr. Evil movie? Would you prefer a straight up Austin Powers sequel? Or would it be better if Myers just left all of this behind?

Previous post REVENGE REPORT: How Much of SOLO: A STAR WARS STORY Is Lord and Miller’s?