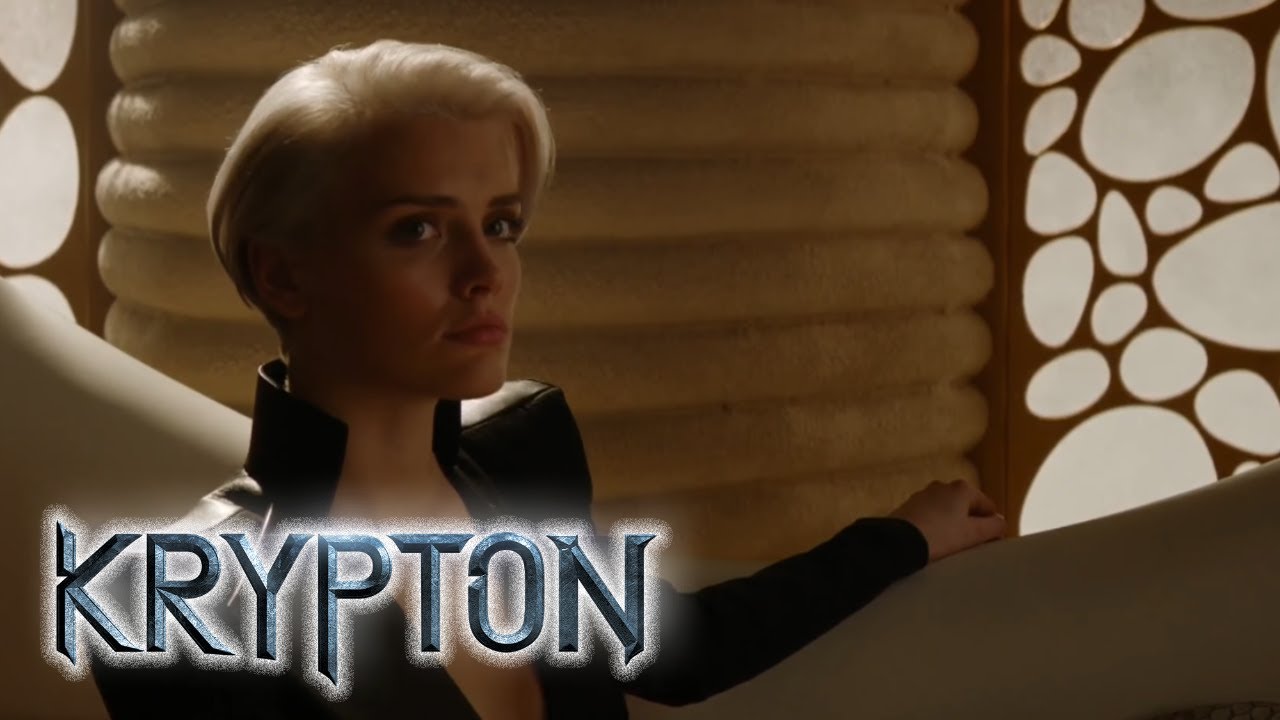 “After a failed coup, Daron punishes the conspirators; Lyta and Dev go in search of Jayna.” (SyFy)

This episode of Krypton picks up immediately where last week left off. Braniac isn’t killing the soldiers in the grasp of his wire like tentacles. No, he is in essence, reprogramming and brainwashing them, to serve his bidding. Some soldiers make a run for it and Braniac’s recapture of them is quite frightening. The quick cuts, eerie music, and blood trailing on the floor, from tentacles grabbing wayward soldiers and dragging them back to Braniac, had a bit of a horror genre vibe to it. When Daron-Vex arrives at the crime scene, Braniac, posing as the Voice of Rao, accuses Daron-Vex of being in on his assassination attempt. Daron, profusely refutes that claim. It is at this point that Braniac reveals his true nature and tells Daron-Vex, that he knows he was the lead conspirator. He offers to spare Daron’s life, if he reveals all of his co-conspirators. Daron-Vex, to save his own @$$ agrees, even naming his own daughter. When Braniac insists, that they all must be killed, Daron asks to do the job himself. At this point, I thought he was going to take that opportunity to protect and spare his daughter. I was wrong. Proving he’s an evil, S.O.B. who can shake hands with Lionel Luthor from Smallville, he had every intention of killing Nyssa. Honestly, with a father like that, I’d rather be emancipated!

As General Zod is treated and recovers from a gunshot wound he took in last weeks episode of Krypton, Lyta-Zod and Seg-El hear of the manhunt in Kandor for the conspirators of the assassination attempt on the Voice of Rao. When hearing that both Nyssa-Vex and Jayna-Zod are among those hunted, Seg and Lyta head their separate ways to help them. When Seg arrives at Nyssa’s quarters, he finds she has turned the tables on her father, who tried to kill her, but it is now she who is holding him at gunpoint. The two subdue Sagitari soldiers, steal their armor and escape confinement. However, as they head back to their secret rendezvous point with Lyta, they do have to fight off soldiers on patrol and Nyssa-Vex proves to be a pretty competent fighter in her own way. It makes the character a multifaceted threat, in that she can hurt you with her mental conniving and cunning, or physically as well. We do feel sympathy for Nyssa in this episode, as she reveals that her father, in a way forced her into this political life style. She chose it as a way to please him and gain his appreciation and love. She tells Seg how she gave up on her own goals to appease his. This is the most honest she has ever been with Seg-El. These were painful truths to admit, and it came through in Wallis Day’s performance. For the first time in this series, I feel as though, Nyssa-Vex and Seg-El respect and admire each other.

Meanwhile, Lyta-Zod finds her mother in the Outlands, searching for refuge. Her search for solitude failed as she is found by a Braniac controlled, Dev-Em. Before he goes in for the kill, Lyta-Zod blasts his arm off and kills him. As Lyta distresses over what she had to do, she asks her mother why she would turn on the Voice of Rao and abandon her duty to Krypton. Jayna tells her she did it to save her life. Seeing a powerful, bad@$$ woman open up emotionally to her daughter, who have, through 6 episodes, not displayed a close bond is emotionally striking. Meanwhile, back at the Fortress of Solitude, Adam Strange is taking Seg-El’s advise and preparing to head back to Earth and his own time. Before he can do that, a mopey Adam Strange, is having A.I. Val-El fix his damaged zeta beam! As the holographic Jor-El/Alfred hybrid gets to work, Adam Strange whines about being a C-list hero on Earth. He bemoans about his failure to achieve his goal of saving Superman, which would get the Justice League to notice him, and make him a member of the Justice League. The cool Justice League name drop aside, this self absorbed whining, isn’t in character for Adam Strange. This behaviour is more appropriate to Booster Gold. Actor Shaun Sipos even has a good look for that character. Could Krypton be pulling a bait and switch on viewers! Is Adam Strange really Booster Gold? If so, why the secrecy?

When Seg-El and Nyssa-Vex rejoin Lyta, Jayna and General Zod, they devise a plan to force Braniac to reveal himself at the closing ceremony of the religious festival of rebirth. As they plan to launch their attack, one of his disciples outs Braniac out of fear. This plan backfires. Braniac confirms the claims and decides to show off by walking through the ceremonial rebirth fire. Coming out unscathed, he promises the people who follow him eternal life. Rather then being horrified or angry at his deception, the crowd present cheers in adulation for him. The stars of Krypton were talking up this episode,  as if it were the best of the series. However, for me it’s the weakest. Seeing our core of characters on the run from the Military guild again, is beyond repetitive. Let’s get on with the core show down shall we!? I’m all for a slow build towards full on Braniac, and it was working for the first half of the season, but there’s 3 episodes left and we have a two second scene of Braniac in full form. That isn’t a slow build, that’s a snails pace. This episode of Krypton, is a sliver of kryptonite, weakening the shows string of super strong episodes.