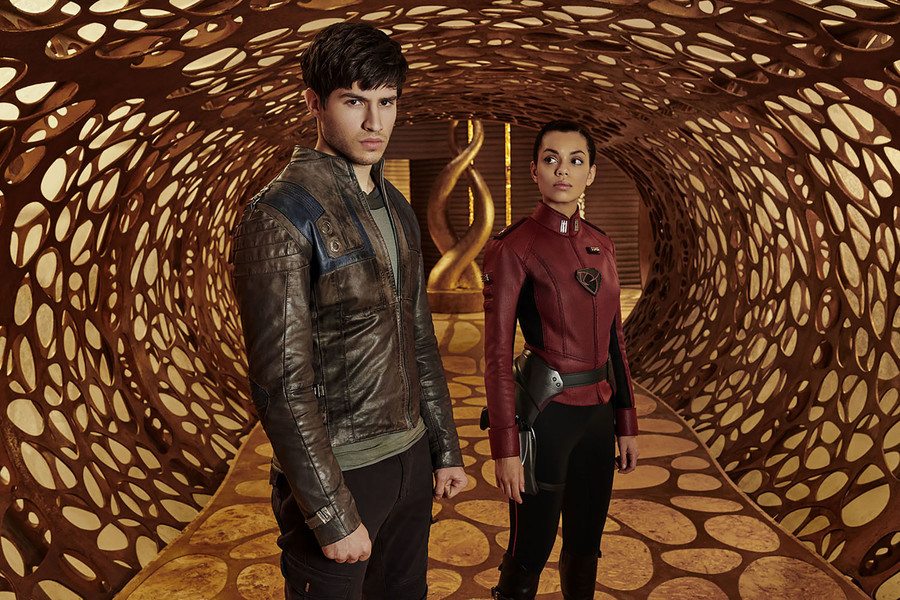 “Seg is forced with an impossible choice that will shape the El legacy and the fate of the universe.” (SyFy)

This episode features two groups trying to save Kryoton in their own way. We’ve got Daron-Vek, Nyssa-Vex, and Jayna-Zod, planning to assassinate the Voice of Rao, while Seg-El, Lyta-Zod and Adam Strange, reluctantly join forces, with the recently revealed General Zod, to find a weapon of mass destruction hidden in Kandor, that can destroy Braniac. What’s unique about the two factions, is that unbeknownst to them, they are essentially working against the same enemy, give the new found connection between Braniac and the Voice of Rao, a few episodes ago. I suspect the two groups will pool their resources eventually. What’s interesting about the plan to kill the Voice of Rao, is the trio of Daron, Nyssa, and Jayna plan to plant bombs at the Hall of Justice (not that one), while their target pardons rankless citizens who were in league with the Black Zero terrorist group. They even intend on using a former Black Zero operative as their fall guy. I realize that they’re trying to depose a divisive tyrant, but this course of action is a conundrum, as it makes them no better than Black Zero Terrorist. Jayna Zod even brings Dev-Em, who is basically the Voice of Rao’s security detail, into the fold. It shows how respected Jayna is, that she can have a respected soldier switch sides, out of respect and loyalty to her. It was Dev-Em who prevented them from carrying out the bombing plan that would have killed many, focusing only on the Voice of Rao instead. This highlights the characters integrity, desire for true Justice, and not killing unless absolutely necessary. The character of Dev-Em and the actor who plays him are criminally underused, in my opinion, so it’s great to see him explored further. Sadly, his plan doesn’t work, and all the conspirator’s are captured by the Voice of Rao/Braniac’s tentacles. If Braniac has control of all these people, then that will prove to be problematic for Seg El and company.

Speaking of Seg-El, he Lyta and Adam are trying to come to terms with the presence of General Zod. Adam Strange has zero interest in working with who he describes as Superman’s greatest enemy. Adam even accuses General Zod of partnering with Braniac, to destroy Superman’s lineage before he is born. General Zod explains that he’s known about Braniac capturing Kandor for 200 years, at it is a pivotal part of Krypton’s history. When he found an opportunity to go back, defend Krypton, and potentially change history to save Krypton, he did. Just as the code of House Zod dictates is their duty. When Zod reiterates this as his reasoning for being there, I as a viewer, bought his reasoning. He drops a bomb on Seg-El and his mother Lyta, as he tells him the truth Adam Strange has been withholding from them,. That truth, is the fact that, in 200 years, Krypton would explode. Seg is furious that Adam lied to him and struggles on deciding whether to help Zod defeat Braniac by unleashing this weapon of mass destruction, or to ensure Superman’s destiny, by letting history play out  as it should. Seg -El decides to side with Zod, when he drops another bomb. That bomb being that Braniac capturing and taking Kandor apart from Krypton, alters the planet enough, plying an eventual role in Krypton’s destruction. Kandor’s removal and capture, to my knowledge, has never been a strong component to Krypton’s actual destruction, as it is played off here. The show manages to add something new to the Superman mythology, and make it seem like it’s been the status quo forever.

The weapon Seg, Zod and Lyta are after, is none other than Doomsday itself. Doomsday is behind a door emblazoned with the combined symbols of House El & House Zod, which can only be open with the blood of both houses. The reason for this, is because the ancestors of House El and Zod, created Doomsday together, as a weapon to defend Krypton from enemy threats. The plan clearly failed and Doomsday was put on ice. When the three are attack by a group of religious extremists, charged with guarding Doomsday in his docile state, they flee, vowing to never free the beast. In some incarnations, Zod is responsible for creating Doomsday, but to make the El family dually responsible, is quite unique and different. This version also makes the creation of Doomsday an epic fail, and an absolute tragedy, given what he was created to do, what he ultimately became and the consequences it would eventually pose for Kal-El. In terms of his look, from the brief look we get at Doomsday, it seems as though Krypton is striving to give us a comic book accurate representation, with bone spurs and everything, Despite the decision by Seg-El and Zod, I’m sure we’ll see him again and on a rampage.

Krypton remains top tier superhero sci-fi television. That’s a perfect 6/6 in entertainment value so far, in my opinion. Not only is this another great episode, for me it’s Krypton’s best yet!