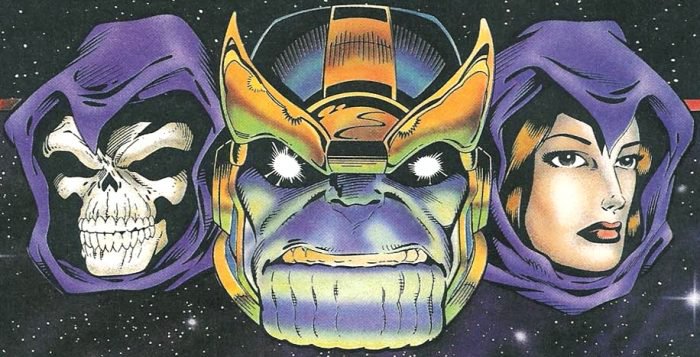 While much of Avengers: Infinity War closely followed its source material, some things and characters were either changed or removed completely.

When it was announced that Marvel would be adapting Infinity War, fans were left to wonder if Thanos’ relationship with the physical manifestation of Death would be explored. In the comic version of Infinity War, Thanos sought the Infinity Stones so he can win the love of Death. However, in the film adaptation, Thanos is looking for the stones so he can “bring balance” by eliminating half of the universe’s population.

Speaking to CinemaBlend, Infinity War co-director Joe Russo explained why Death was left out of the film version of the story.

It’s our job to make these characters work in the Marvel Cinematic Universe. Death is not a preexisting character. We have two-and-a-half hours with 23 heroes; there’s no room to come in and introduce some character that the audience has no emotional connection to in a finale, in a movie that spans 10 years. But then we have all this other storytelling to deal with.

It makes sense why the Russos would want to leave Death out. Infinity War was already trying to balance the already established heroes of the Marvel Cinematic Universe and introducing a bunch of new characters might’ve hurt the pacing and storytelling of the final product.

Leaving Death out meant also changing the reason why Thanos was looking for the Infinity Stones and the movie was all the better for it. In the film version of Infinity War, Thanos’ mission has large emotional effects on the heroes of the MCU and it also makes Thanos a more well-rounded villain than most are used to in a comic book film.

Since its release, Thanos has been one of the most praised aspects of Infinity War, thanks to the writing for the character and a brilliant performance from Josh Brolin.

Previous post The Destruction of the Avengers At The Hands of Steve Rogers – CAPTAIN AMERICA: CIVIL WAR – Road to Infinity War – PART 14