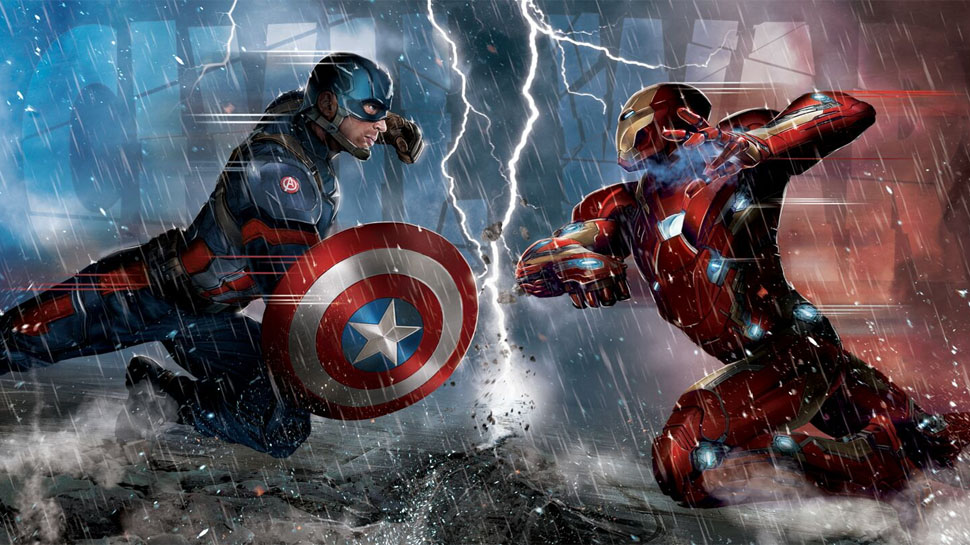 Today, as part of the lead-up to Avengers: Infinity War, we’ve got an ode to the last time Marvel offered up some warfare, Captain America: Civil War. Brent Clark loves the third Cap film (even if he thinks it shouldn’t be considered a Cap film), and he wants you to know why.

I often take a lot of flak (most of it good natured) for considering Captain America: Civil War to be my favorite movie. I thought I would detail some of the reasons why.

First and foremost, Civil War isn’t a story about a universal threat, or even a threat to just Earth, or a country. It’s far more personal in a way that only the Marvel Cinematic Universe could do. It’s really two stories about friendship that overlap across each other. On one hand, you have the Sokovia Accords, which amounts to the Avengers registering as official agents of the United Nations. On the other, it’s a manhunt for Bucky, who has been framed for bombing the very conference where the Accords would be ratified. The reason I think only Marvel could have pulled this off, is they are the only company that has put in the time and legwork in previous movies to lay the foundation for the friendships that fall apart, namely with Captain America and Iron Man.

During the first Avengers movie, you see how tense the relationship with Steve and Tony is. You see them argue, bicker, and just about come to blows before Loki attacks the helicarrier. In Avengers: Age of Ultron, once again you see them arguing. It’s clear they’ve developed a friendship but they have a very different view of the way the world works. Once we get to Civil War, Tony is finally beginning to acknowledge he has caused a number of problems, namely Ultron, that have lead to disaster, resulting in his willingness to get on board with the Accords. Steve on the other hand, has gone through the events of Captain America: The Winter Soldier, discovering that S.H.I.E.L.D. and the government in general is not always in the right. He first got his powers as a result of wanting to serve his country, but now he is no longer sure blindly serving is the right thing to do. This is most evident when he says to Tony, “If we sign this, we surrender our right to choose. What if this panel sends us somewhere we don’t think we should go? What if there’s somewhere we need to go and they don’t let us? We may not be perfect but the safest hands are still our own.”

What begins in Civil War as discussion and disagreements devolves rather quickly after Bucky is framed. Steve does what you would expect, and not only believes Bucky is innocent, but literally stands in the way of anyone who tries to take him. It’s important to remember that Bucky isn’t just Steve’s oldest friend, but he is Steve’s only connection to his past. To the time period Steve is supposed to be in. It’s no wonder he will do anything he can to protect that connection. Throughout the movie Tony will try to appeal to Steve with their relationship, but it just can’t match that connection that Steve and Bucky have.

I want to take a minute to bring up what is my favorite action scene in any comic movie to date, the Airport Scene. This battle of Avengers vs Avengers is not only composed wonderfully and is amazing in its fluidity as it moves from close up 1-on-1 battles to wider shots showing the chaotic nature of the entire battle, but it shows numerous character interactions that are fun for the viewer. Fun may be a strange word, but it’s absolutely something I find important in movies. The Airport starts out with a conversation, moves to a battle where you can tell neither side’s heart is truly in it at first, and degrades to things getting more serious.

This is also Spider-Man’s first introduction to the Marvel Cinematic Universe. I’m the first to admit that the movie could be told without him, but I also acknowledge the behind the scenes reasons he almost had to be included (once Marvel came to a deal with Sony Pictures that is.) Spider-Man is my all time favorite character, and it was truly special for me to finally see him as part of the greatest cinematic universe. That is a feeling that will never be matched again for me.

By the end of the movie Iron Man realizes Bucky was indeed framed, potentially setting the stage for a reconciliation with Steve. However, Zemo, the villain behind the entire plot of framing Bucky, reveals to Tony that it was actually Bucky (mind controlled as The Winter Soldier) who killed his parents. Worse, Steve knew enough about it to suspect it was Bucky. This leads to the final split between Tony and Steve, with the two of them fighting over Bucky. This is a raw, emotional scene (and arguably one of the most brutal fights in comic book movies).

When I first saw this scene, it was almost heart breaking. We are seeing these two friends, who have had numerous disagreements, but have always come together in the end, go at it as viciously as they would fighting any random villain. I genuinely believe that this fight, this spilt between them, was truly earned in a way that would not have worked without the groundwork laid in multiple other movies. Where the Airport Scene started out with everyones hearts not truly in it, this battle was immediately far more dangerous. This is most shown when at one point you can see Tony truly believes Steve is about to kill him. Instead Cap drops his shield and walks away.

Looking to the future, I think we can all agree its inevitable the Avengers will assemble again, most likely in the upcoming Avengers: Infinity War. Especially since Steve did extend an olive branch to Tony at the end. For me, that doesn’t lessen the impact of this movie.

This movie has numerous major action scenes, all of which are great. It features relationships falling apart in way that would not be nearly as meaningful without the rich history of the characters. It introduced fans of the MCU to both a new incarnation of Spider-Man, and what many consider to be the break out character of the movie, Black Panther.

I have my criticisms of the movie, but they are mostly so minor I really don’t care overall. The two biggest I think are worth mentioning are the title, and it’s place in continuity. I really think it should have just been called Marvel’s Civil War or Avengers: Civil War. With so much of the movie focusing on both Steve and Tony, it’s hard to count this as a Captain America “solo” movie. As for the continuity problem, this movie’s greatest advantage, it’s history, is also it’s biggest weakness. Even I have to acknowledge if you’ve seen the other MCU movies it’s a wonderful continuation, but if you haven’t, the movie would suffer. Sure, Spider-Man and Black Panther would still be great for new viewers, but the relationships of Steve, Tony, and Bucky  (and a number of others) would not have near the impact.

When you take this all into consideration, the relationships, the drama, the action, the comedy (which I’ve hardly touched on but is expertly included) and the introductions of Spider-Man and Black Panther, and the way it’s builds on what came before, you have my favorite movie. Directors Joe and Anthony Russo have put together what I believe are the best two installments in the MCU with Civil War and The Winter Soldier. They have shown to have a real understanding of how all the characters think and act. There is not a single character in Winter Soldier or Civil War that one could make a legitimate argument that they are “acting out of character.” I’m not one that generally follows directors from movie to movie, but I’m thrilled they are the creative team behind Infinity War and the untitled fourth Avengers movie.

As someone who values shared universes as much as much as I do, this movie just couldn’t have worked for me without it’s rich history. Is it any wonder Captain America: Civil War is my favorite movie?

If you enjoyed this column, and would like to offer Brent some feedback, feel free to do so in the Comments Section below. He can also be found on Twitter, and he’s got a pair of Podcasts you can listen to as well.

As always, if you’d like to submit a work of your own to Revenge of The Fans, simply CONTACT US.

Previous post Kevin Feige Comments On Phase 4, Past Mistakes And The Future Of The MCU

Next post AQUAMAN: Description of What Was Shown At CinemaCon, And The Raves It Received!