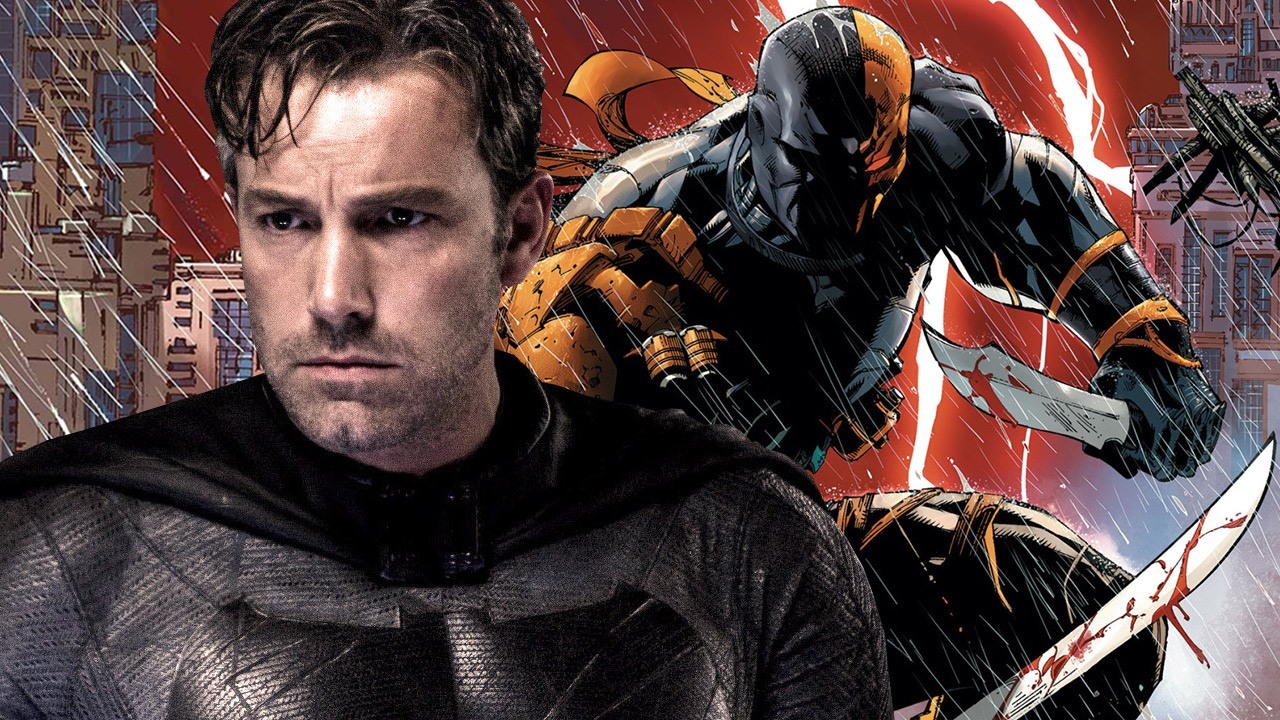 Ben Affleck has had a long and winding history with The Batman, one that I’ve chronicled quite extensively. One of the side effects of his epic game of Bat & Mouse with the project is Joe Manganiello’s involvement as Slade Wilson, aka Deathstroke. The character was first glimpsed in an epic tease during principal photography for Justice League in 2016, and was said to be the central villain in Affleck’s script for The Batman.

Shortly after that, we found out that Manganiello (True Blood, Magic Mike, Rampage) would be the man behind the mask.

Then something kind of depressing happened:

In early 2017, amidst rumors that Affleck was on the verge of dropping out as The Batman‘s director, reports came out that Manganiello was hard at work training to play Deathstroke in the film. The actor was speaking passionately in interviews, and on social media, about all of the work he was doing to prepare for his breakout role in The Batman, while the film itself seemed to be on the verge of collapsing in on itself. You really couldn’t help but feel for the guy.

And then it happened. Affleck dropped out and, weeks later, we also discovered that his script went out the door with him. Matt Reeves was hired to step in, was given full creative control over The Batman, and it soon became clear that Manganiello’s Deathstroke was unlikely to factor into the new script since Reeves had his own vision for the film.

Manganiello/Deathstroke fans were tossed quite a bone in the fall of ’17, though. We found out that not only was Manganiello still going to get a chance to play him, but that The Raid director Gareth Evans was developing a Deathstroke movie!

Now, in a recent interview with Chris Hardwick, Manganiello has opened up about the unlikely path Deathstroke has taken so far to the big screen- and how his intense preparation for the role when he was going to be the big bad in The Batman led to what will likely be part of the origin story Evans is developing:

“When I met with Ben Affleck about Batman, the meeting we were having was for Deathstroke. This is a real opportunity to figure out who this guy is on the inside. Like what he’s battling with…

…From the inside, this is a person who is struggling with all types of things. I think it’s really interesting to tell that kind of a story and tell the truth emotionally of a story like that when you’re talking about a man who lost an eye, was betrayed, lost a son. These different types of aspects.

Then you couple that with real-world military training. Then I started training at like a Ninjutsu dojo and started learning sword fighting. Started learning and understanding where those techniques come from. All of a sudden this thing starts writing itself.

…Somewhere along that way I know that it was announced where the studio – there was talks with Gareth Evans and talks about an origin movie. I’m not giving news. I spent six months prior to all of those phone calls writing a backstory that was turned into sixteen pages, which got turned into a treatment, which then led to my Skype call with Gareth.”

It’s really such an interesting tale and- if the film ever gets made- will make for a fascinating origin story in its own right, for the project.

As I’ve discussed before, the studio seems high on the Deathstroke character and has some ambitious plans they’re considering for the Legion of Doom that was teased at the end of Justice League. So while things may not have worked out with Affleck’s The Batman, it looks like one positive that could come out of it is a cinematic Deathstroke that’s played by an actor who’s incredibly passionate and dedicated to the role.

And it’s funny to think that things would’ve played out very differently if Affleck had stuck around and kept Slade as the central antagonist in his Bat flick, because then it’s unlikely that anyone would be developing a solo Deathstroke movie right now.

Next post SOLO: Ron Howard Confirms He’s Brought A Staple From His Oeuvre To That Galaxy Far, Far Away