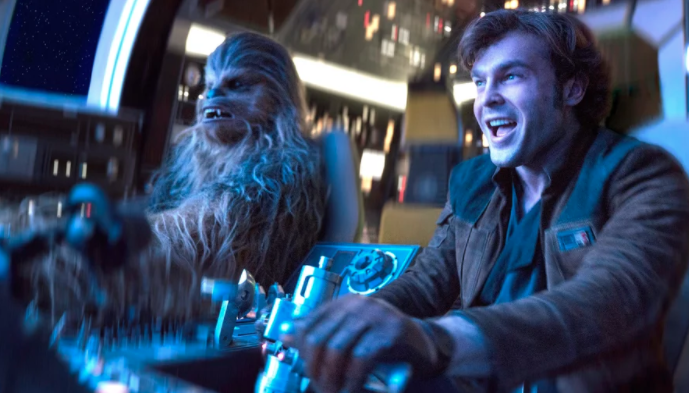 Another day, another Solo Star Wars story, they should use that as a title or something. If you’ve watched the previews for the movie, you will notice that Han is a different person than what you’re used to. I’m not talking about Alden Ehrenreich – I mean the way Han Solo views the world.

“I have a good feeling about this” has never been said in this franchise, let alone by Han Solo. That should give you enough of a clue as to where his head is when we meet him.

Well, in an interview with Empire Magazine, writer Lawrence Kasdan said he was intrigued by that idea too.

“I was attracted to the idea of how this guy became the cynical on the outside, tender-hearted on the inside person we see in A New Hope. What creates that outer shell of cynicism and what creates that core?”

My guess? Chewbacca. In one of the TV Spots, Chewie says something to which Han replies: “You think everything sounds like a bad idea“. That cynicism obviously rubs off on Han through their time together. I am sure there are other factors, like being burned by someone he trusted, but it seems Chewbacca helps him become the Han we come to know.

Another answer to that could be one of the villains of the film. His name is Enfys Nest and he will square off with Han in the movie.

The other writer of the film, Jon Kasdan (Lawrence’s son), talked to The Star Wars Show about the villain.

To understand who Enfys is, you first kinda think you gotta understand who Woody Harrelson plays, which is a character named Beckett. Who is sort of a highly trained, very lethal criminal. He’s a real pro, who’s into big jobs, and he runs a crew. But one of their competitors is a sort of more pirate-like gang and the leader of that gang is Enfys Nest.”

It seems like Han will be part of Beckett’s gang, and Enfys is the rival gang (called the Cloud Riders) trying to do the same job. That will naturally cause some conflict.

Between Enfys Nest and Paul Bettany’s Dryden Vos, Han and Chewie will have their hands full. We shall see how they fair when the film is released on May 25th.

Next post RUMOR: DC’s BIRDS OF PREY To Be Very Harley Quinn And Batgirl Centric