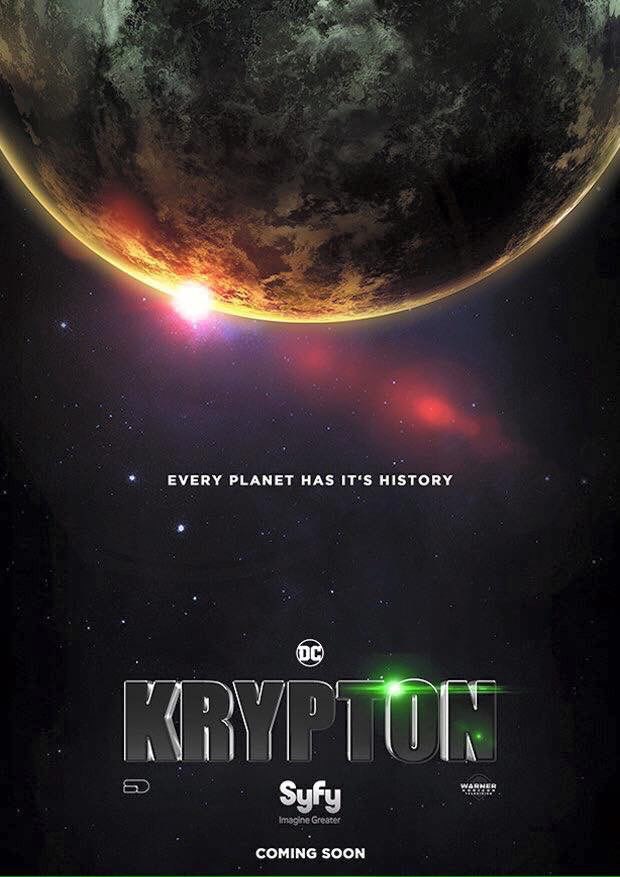 “Seg is approached by a Black Zero leader as Rao finds a scapegoat for the failed Rankless Initiative. ” (SyFy)

This episode of Krypton highlights how entrenched law and religion are to one another and the corruption that binds them. The Voice of Rao is preparing to celebrate a religious festival symbolizing rebirth, but is furious that the rankless are in a state of unrest, due to the chaotic events and failure, of the Rankless Initiative from last week. He turns to Daron-Vex to punish a high ranking member of the Military Guild, and select Lyta-Zod as their scapegoat. The Voice of Rao has evidence manufactured and falsified,  implicating Lyta, who is later arrested for treason. After hearing of this, Seg-El appeals to Nyssa-Vex to help Lyta. Once Seg is honest about his true feelings for Lyta,  Nyssa agrees. What we discover about Nyssa is that she’s a lawyer of sorts, and will provide legal council for Lyta.  Four episodes in, it’s nice to start getting a clearer picture of what people’s roles are within different guilds. Before meeting with Lyta, Nyssa meets wit her father, and tears into him about falsifying evidence, and falling in line with the Voice of Rao. She accuses him of damaging their ultimate end game, which is to overthrow the Voice of Rao. This would give them control of Krypton, where they could truly unite ranked and rankless alike. I didn’t see this twist coming from House Vex, as I though they had a disdain for the rankless and were 100% in league with the Voice of Rao. Her father’s fear of the Voice of Rao is understandable, but his wishy/washy attitude makes me question what kind of leader he will be. After her impassioned plea to her father, I do believe Nyssa-Vex has pure intentions and is out for the good of Krypton. The fact that from episode to episode, I am questioning the characters intentions, speaks to the strong performance of Wallis Day. She is setting herself apart as the strongest performer on the show, and I’m glad her screen time is increasing. Hope that trend continues.

Seg-El and his bartender friend Kem are left picking up the pieces after their friend Rhom’s death, after being infected by Braniac’s virus and becoming one of his Sentry’s. Now they must explain to her daughter Ona, that her Mom is not coming home because she has died. When Kem breaks the news to her, there is genuine compassion and sadness coming from him.. This is in sharp contrast to the scoundrel, and conniving personality, we’ve seen up to this point. To help her get closure, he takes her to the religious ceremony, so she can present a statue of Rao, to the Voice Of Rao, in the hopes it will grant her mothers soul safe passage through the afterlife. The Voice of Rao takes to Ona and accepts her offerings. As he examines the statue in his holy quarters, the statue breaks sprays a mist and begins to infect the Voice of Rao. His mask breaks, eyes go red and his veins start going green! Firstly, I didn’t expect the statue to contain Braniac’s virus. There was no indication, where or when the virus could’ve been implanted in the statue. Secondly, I assume that the Voice of Rao is transforming into a Sentry of Braniac’s. However, there could be a small chance, based on the brief glimpse of his transformation, he could be transforming into Braniac himself. Though, that’s more of a wild guess on my part.

Seg-El is kidnapped this episode, by supposed Black Zero terrorists, led by Arrow alumni, Colin Salmon. There’s a gruesome scene where they test if Seg is a Sentry of Braniac’s. I won’t tell you what. or how they do it. After all, to be truly grossed out or disturbed, you have see things on first sight, not be forewarned. After determining Seg is clean. The leader of this group informs Seg that he is not a member of Black Zero but that he and his crew want to work with Seg, to stop Braniac. They ask Seg for Rhom’s body, so that they can discern what information they sent to Braniac. Seg agrees, if they will help him break a prisoner out of Fort Rozz. That prisoner, being Lyta Zod. As the mystery group prepares to do as Seg-El requests, he steals a weapon and escapes. The fact that this group knew about Braniac was a total surprise to me. Colin Salmon’s assertive, demanding demeanour, and his military background have me thinking he will be revealed as either Lyta-Zod’s father or uncle. All these different factions wanting to take control of Krypton, has the show really starting to embrace that Game of Thrones motif, minus excessive violence and nudity of course.

Four episodes in and Krypton is a perfect 4/4 with me. It just keeps getting better and better. The slow progression to the appearance of Braniac is both something I’m enjoying, and is killing me at the same time. While Krypton started as a hybrid of Donner/Snyder continuity, it has hit its stride and is branching out as it’s own unique piece of the tapestry that is the Superman mythology.