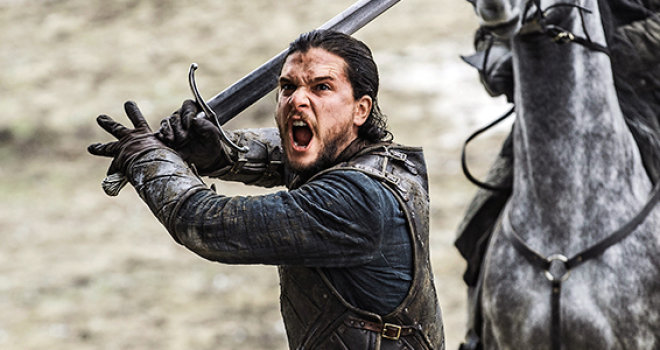 Throughout its run, Game of Thrones has delivered some of the most epic battles in the history of television.

From season two’s Battle of the Blackwater to season six’s Battle of the Bastards, the HBO series has given audiences true medieval-fantasy warfare. With season eight on the horizon, fans of the series are expecting some of the biggest battle scenes in the show’s history and it seems like they’ll be pleased.

Watchers on the Wall, a Game of Thrones fan site, got a hold of a photo posted on assistant director Jonathan Quinlan’s Instagram confirming that the 55 day shoot on one of the biggest battle scenes in the show’s history has been completed.

The caption for the post was “Says it all. 55 consecutive nights. 11 weeks. 3 locations. You’ll never again see anything like it.” The post has since been deleted, but it does give an insight on how massive this scene may be.

The scene in question may involve the epic confrontation between the forces led by Kit Harington’s Jon Snow and Emilia Clarke’s Daenerys Targaryen and the Night King’s White Walkers. A scene this large, and with this many extras, would obviously trump the massive Battle of the Bastards from a few years ago. Plus, you know, it’ll have dragons!

The biggest problem is having to wait a whole year to see how this transpires. Hang in there, Game of Thrones fans!

The final season of Game of Thrones will begin sometime in 2019.

Source: Watchers on the Wall

Next post GRAND THEFT AUTO 5 Has Made More Money Than Any Other Form Of Media… Ever!