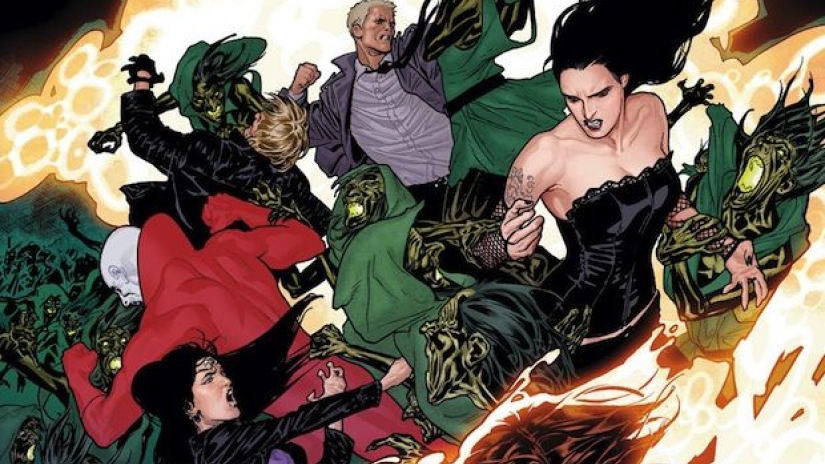 Out of the various DC film projects in the works, Justice League Dark has garnered a lot of attention.

Seen by fans as DC’s answer to Marvel’s Guardians of the Galaxy – along with Suicide Squad  and New Gods – a film adaptation based the supernatural team has been in the works for a while, with directors like Guillermo del Toro and Doug Liman being attached to the project at one point.

With the film still in active development, That Hashtag Show has dropped a cool little cameo. In a recent draft of the script, the film was set to have an appearance by the Shadowpact at Eddie Deacon’s Oblivion bar.

The Oblivion bar is an establishment that only folks well-versed in magic can access and is seen as a sort of neutral for good and bad magic users. The Shadowpact uses the bar as their headquarters and their mission is to champion a lost cause. In the film, the group would comprise of five members: Detective Chimp, Doctor Fate, Black Orchid, Pandora and the Phantom Stranger. The group would have no real interaction with John Constantine’s group.

Whether or not the Shadowpact or the Oblivion make the final product is currently unknown, but they would be cool Easter eggs for fans. With Warner Bros. and DC currently tight-lipped about what the future holds for the DC film franchise, fans may have to wait a while for a Justice League Dark film, but news like this may help make that wait a little easier.

One thought on “RUMOR: JUSTICE LEAGUE DARK to Feature an Appearance from the Shadowpact?”

Next post Michael Myers Will Don His Original Mask in HALLOWEEN