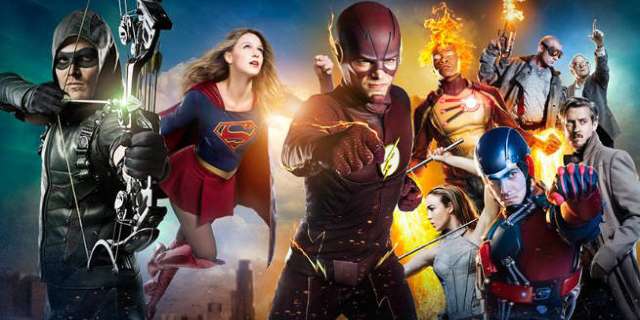 Here at Revenge of The Fans, our goal is to give fans of all creeds a platform. Whether it’s a vlog, a column, a review, etc. we want you to feel like your voice matters.

In today’s case, we’ve got a fan’s love letter to the DCCW, which includes shows like Arrow, The Flash, Legends of Tomorrow, and Supergirl. The author of the piece is reader and listener Brent Clark.

Check out what he has to say about the Arrowverse!

Revenger Submission: “My Love for Arrow and the DCCW”

In October of 2012 a new show was starting called Arrow on the CW. It was an origin story for Green Arrow, cut from the same tonal cloth as the Christopher Nolan Batman movies. At the time I was saddened that it wasn’t a Smallville spin-off with Justin Hartley in the title role. I had enjoyed Smallville for ten seasons and wanted to see that world continued. Smallville had given a tease of what could be (and what would come) with episodes introducing other heroes from DC Comics, and Hartley’s Green Arrow by far had the most screen time. One of my favorite episodes was one featuring a proto-Justice League. I had dreams of a spin-off of that Justice League which of course never came to fruition.  Instead of Hartley, an actor I hadn’t heard of before (which isn’t saying much I admit) named Stephen Amell was playing the title character in Arrow. I watched the pilot with reservations, fully aware that I was basically watching it because it was a new comic show, and without Smallville, there was nothing else for me. I was blown away by the Pilot episode. In an early scene, Oliver and his best friend Tommy are abducted and watching how Oliver got them out of that scenario is basically the scene that hooked me. I didn’t know at the time how much that show would mean to me.

I really enjoyed all of Season 1 of Arrow, but it was Season 2 that really cemented that show, that world (at the time dubbed the Arrowverse by fans) as having a special place in my personal fandom. In a two-parter told in episodes 7 and 8 of that season, the single biggest step towards giving me a live action Comic Universe was taken, though I didn’t know it at the time. But those are the episodes that introduced Barry Allen (played by Grant Gustin).  Prior to episode 8, everything in Arrow existed in a world of semi-reality where the events are just plausible enough for the viewer to feel it could take place in the real world. Then, after being struck by lightning, the viewers were shown that Barry Allen was indeed going to gain super powers, just like his comic counterpart. Originally a later episode that season was meant to be a backdoor pilot for The Flash but later it was upgraded to getting a pilot of its own (though that planned Arrow episode did still show a couple of people who would go on to be supporting cast members in The Flash). I had no idea how big it would become.

Looking back on my media consumption history, I’ve always been fascinated by shared universes. Growing up I understood why DC and Marvel were separate, and sure I enjoyed the handful of crossovers they did have, but I didn’t feel like I was missing anything because both DC and Marvel were so big that they each had an universe of characters. I loved it when characters would interact with others they don’t get too on a normal basis. Seeing pairings like Nightwing and Superman, or Captain America and Spider-Man, were fun because they weren’t the status quo. In television I loved how Xena was a spin-off of Hercules, and how their world felt so much bigger because of the shared characters and shared history. I felt the same thing for Buffy the Vampire Slayer and spin-off Angel (though that did lose something when they ended up on different networks limiting the crossover potential.) The showed what could happen when you allowed shows to tell their own story. To be on their own, but exist in a world that allowed them to come together. But there had been nothing approaching that in television. The closest being the Animated Universe that began with Batman, went to Superman and expanded to Justice League. I enjoyed that universe but, to this day I struggle to get into animation the same way I do live action. We were just starting to see shared universes become a thing in the movies, with the Marvel Cinematic Universe, but I I just didn’t have hope for it on television again prior to Flash season 1 starting.

The following season (Arrow season 3 and Flash season 1) I was in geek heaven. Two active shows, that I loved, that were in a shared universe plus they would actually have crossovers (both large and small) on a semi-regular basis. Even better they were comic shows from the big two. It was characters that I loved having separate stories and adventures, but occasionally coming together for larger threats. And unlike movies, where I was lucky for an installment or two every couple of years, I got 20 plus episodes from both shows. I’ve long considered myself a TV fan more so than a movie buff. I love the long form story telling (while still enjoying the occasional one-off) that can only be found in TV. TV has the advantage of runtime, and being able to tell longer, more drawn out stories and showing character development over years worth of stories.  Great movies certainly can show development. And great franchises can even more so. But a movie just isn’t as satisfying to me as a good tv show I can sink my teeth into and get lost in for a few seasons. Of course there are exceptions (I truly love the MCU for example) but as a general rule I would rather watch a tv show over a movie just about any day of the week.

From the introduction of The Flash,  the DCCW (as I like to call it) doubled in size to include DC’s Legends of Tomorrow and eventually would absorb the CBS show Supergirl. Legends featured characters from both Arrow and Flash, as well as new characters. Supergirl, while existing on a separate Earth, was brought in via the Flash accidentally going to her world. When Supergirl came to the CW formally I finally started seeing the potential to once again have that super team that was teased in that Justice League episode.  Something that I feel was truly brought to fruition with the four episode, four show, Crisis on Earth-X. The Crisis event is basically what I wanted going back to that proto-league in Smallville. It was truly like reading a line wide crossover event. My favorite franchise in comics media, including comics themselves, has grown to 4 shows, all of which are in their third season or greater, with a reasonable possibility of renewal. Back in the days of Hercules or Buffy, I never thought something like this was possible in live action television. And if I were a betting man, I would bet on it expanding further to include the excellent Black Lightning which is also on the CW.

I’m sometimes given a hard time by fellow podcasters, and listeners to my shows, for putting too much value on the shared universe model. And maybe I do. But to me a larger, more grand story will almost always win out over a smaller one. But what’s best is having both. And both are only possible in a shared universe. Sure, it limits some solo stories that just don’t work in those universes. But the potential for even more stories that do work, but wouldn’t with each character separated, is even greater.

The DCCW is basically the realization of a comics/television dream I’ve wanted for as long as I can remember. I don’t know how much longer it will last. But I’ll love the ride as long as it does.

If you enjoyed this piece, or would like to offer Brent some feedback, please share your thoughts with him in the Comments section below!

He’s also on Twitter and is the host of a pair of podcasts: DCTV Squadcast and Fans Without Borders.

Next post RTF Original: “Here’s What I Think of Zack Snyder…”