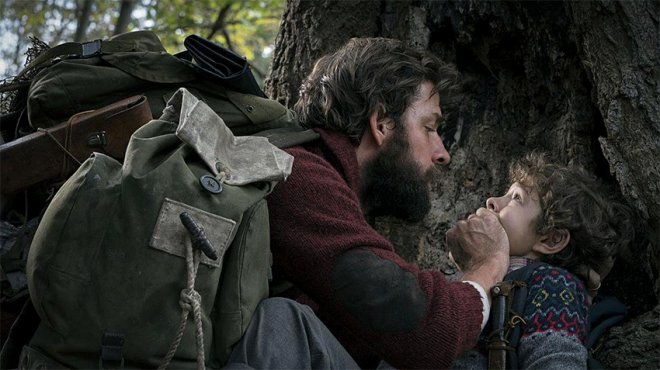 With the simple tagline, “If they hear you, they hunt you,” A Quiet Place has become the first horror event of the year. The bare bones concept that the only way to survive is to be completely silent has been resonating with preview audiences for John Krasinski’s first venture into horror. The word on the street is that the film is great, and it currently sits at a perfect 100% on Rotten Tomatoes, with 36 reviews tallied so far.

Paramount Pictures wants to capitalize on that early buzz with this final A Quiet Place trailer, which plays up the terrifyingly simple plot and the words of praise that are being heaped onto the film:

Last year was a breakout year for the horror genre, with studios scoring hits with Split, Get Out, Happy Death Day, Annabelle: Creation, It, Jigsaw, and more. That momentum has carried over into 2018, with Insidious: The Last Key banking a stellar $166.2M on a budget of only $10M in January.

Audiences are primed for bone-chilling thrills, and it feels like A Quiet Place is going to be quite a frightful event; One that’s embraced by fans and critics alike. Let’s not forget that the last time a scary movie got reviews like these (Get Out), it resulted in a Best Picture nomination. While that’s unlikely to happen this time, it’s proof that horror is having a moment.

Let’s see if A Quiet Place will extend it.

The film was written and directed by Krasinski, who’s best known for his work as Jim on The Office. His co-star in the film is none other than his wife, Emily Blunt.

A Quiet Place arrives in theaters everywhere this Friday. Revenge of The Fans Editor-in-Chief Mario-Francisco Robles already has his tickets.

Are you going to see it?

Next post Did a Leaked Brisk Promo Give Us Our First Look at VENOM?