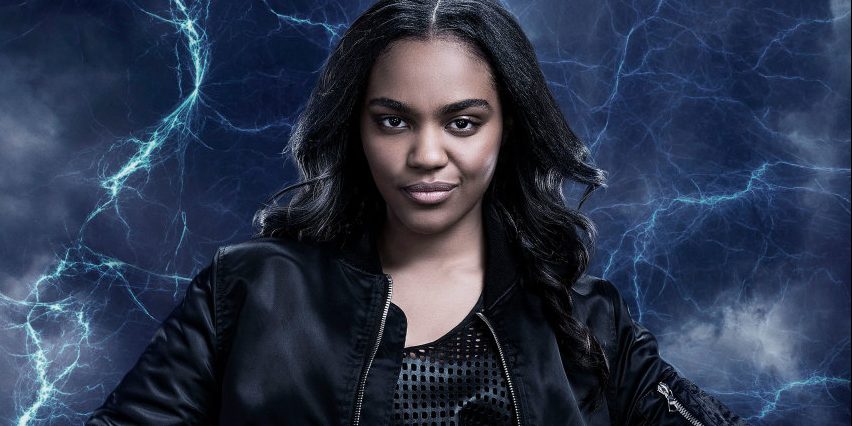 “Black Lightning (Cress Williams) attempts to rescue several long-missing children reveals a secret he did not anticipate, and its resulting connections. Gambi (James Remar) struggles to stay strong while in a compromising position. Jefferson begins to view things differently.” (The CW)

This episode of Black Lightning starts with one of Jefferson’s students who was on “Green Light”, Lighting in flames. As the girl’s powers come to light, she is summarily stuffed into a van and taken away. One of Black Lightning’s street informants sees this, and informs Jefferson. Meanwhile, Jefferson catches an even younger student peddling drugs, to make money for he and his struggling grandmother. Jefferson stops the boy, promising him he’ll get help for his grandma, if the boy joins Jefferson’s mentoring program, Early on, this show has established that Jefferson’s roles as a principal and a vigilante, do equal amounts of good for the community of Freeland. I’m glad this point is picked up again. This aspect of Jefferson Pierce makes him unique in the pantheon of superheroes, in that both his identities serve a greater good, instead of one being more of a cover for the other.

When we first pick up with Anissa, she is scoping out a tip Gambi gave her,and as Thunder. She finds an abandoned wherehouse used by the A.S,A. , where they keep kids and people with abilities captive, in pods. Submerged under liquid. It almost looks like cryogenic freezing. When Anissa goes back to the location with her father, the pods are gone and Black Lightning and Thunder are attacked, by an A.S.A SWAT team of sorts. Unlike last week, the ensuing fight scene was really strong. Black Lightning creates a full on electricity dome, to protect he and Thunder from bullets. Thunder at one point uses her father’s electricity blasts, springboards off it, using it to enhance the power in her jump, creating more of an impact with the ground, shaking it enough to knock over the rogue A.S.A. Swat team. It was nice to find out what happens to the super powered kids and teens once they are abducted, even though I’m not sure why they are being kept under such sedation. Is the A.S.A planning to brainwash them, creating super powered agents perhaps?

Jennifer is being hounded by Anissa, to explore and learn her new powers, so she too can do some good. Jennifer wants no part of it. When Anissa presses her some more, calling her a quitter, Jennifer bursts into flames, like the Human Torch, putting a hole through the sofa. I don’t like Anissa trying to force Jennifer into super heroics. To me, it’s the shows way of getting meta, and the producers trying to force this character into a role, she isn’t ready for yet. As I said last review, if Jennifer absolutely MUST become a superhero, than it should occur as part of a character arc, with a defining moment, not because Anissa is being badgered by her sister into it. The real take away from these scenes is that after the incident, Lynn runs some tests on Jennifer, determining that while her father channels electrical power, Jennifer creates it. So if and when Jennifer does take part in the “family business” she and her father can work together on a very literal level. I also enjoy the fact that each of the three family members has distinct abilities, that set them apart and look visually different.

Gambi finds himself in trouble, in this episode, when he is forced to leave his shop with the A.S.A, director and several thugs. He only goes with them, after they threaten civilian life, if he does not comply. He is eventually beaten and tortured, for information on the identity of Black Lightning. Gambi doesn’t relent, so the goons go and grab Jefferson, take him to the location and threaten to kill him, if Gambi doesn’t reveal the truth. After seeing Gambi in a bruised and battered state, he uses his powers to turn off the lights and beat the goons to a pulp. The fact that Gambi would risk his life and Jefferson is willing to expose his identity for each other, despite their current impasse, shows just how powerful their bond is. While their friendship isn’t yet rock solid again, it is on the mend, and I continually enjoy progression of this story line. If anyone still wonders where Gambi’s loyalty lies, it’ll be clear after you watch this. The end of this episode offers a twist. Someone close to Jefferson, is indeed a scout for the A.S.A. I won’t revel who until next week, at the earliest, so you have a week to see for yourself.

With Tobias Whale a no show again, Lala takes center stage as the villain in this episode of Black Lightning. Lala is taking control of The 100. He’s now brokered a deal to sell cocaine, with Green Light taken off the market, thanks to our hero. To acquire the product from the seller, Lala mortgages his mothers life. That’s pretty ruthless, right up there with Tobias Whale, in my opinion. He is once again talking to dead people but this time it’s his cousin, who he also killed. I don’ know why this is happening to him, or what exactly is going on, but it’s clear he’s got the ghosts of people he’s killed in his head. When a couple of his henchmen question his sanity, he kills them both. If he keeps this up, his head’s going to be crowded with dead people. Actor William Catlett gave the best performance in this episode, balancing insanity and ruthlessness.

Just when Black Lightning slips for an episode, it picks right back up the next week. That’s exactly the case with episode 10. If this episode is any indication, the last 3 episodes of the season should be just as thunderously entertaining.