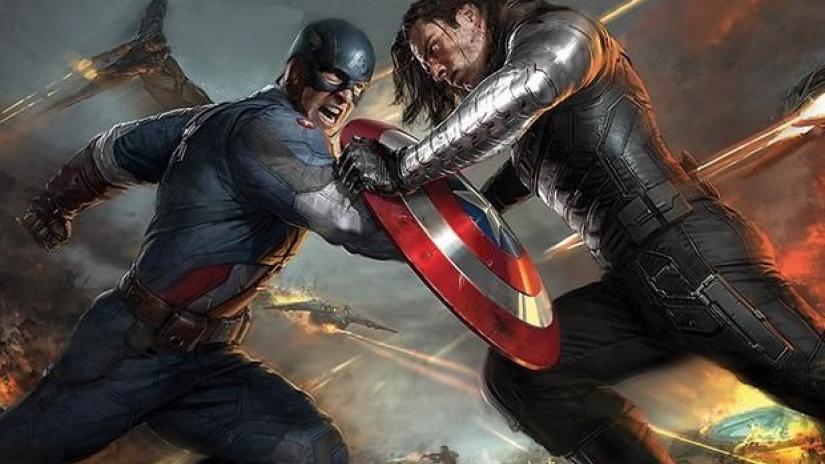 Do you remember the days when Tony Stark was the only hero in the Marvel Cinematic Universe? The MCU started with Tony Stark, expanded with Tony Stark, diverged for a couple movies to introduce new characters, and then centralized again on Tony Stark. Before Captain America: The Winter Soldier came out, it was really hard to say that the narrative of MCU was bigger than just one man. While no one can deny the magnetism of Robert Downey Jr, Marvel was going to have growth issues if they tried to use RDJ for every movie in their 3-film-a-year current MCU schedule.

Back in the days before we knew the full line-up through Phase 3, we had no idea how Captain America: The Winter Soldier would turn out. The director team of Joe and Anthony Russo had only made comedies at this point and Steve Rogers had only been seen through the sepia-toned lens of a period piece in Captain America: The First Avenger and a brief re-introduction in The Avengers.

So how do you follow up the story of Steve Rogers and finally tell the true second half of the tragedy of Captain America?

By giving Steve Rogers yet another sacrifice to make.

In the time since Nick Fury brought Steve, Captain America has been serving his country by working for SHIELD. The bright, red, white, and blue uniform of Captain America: The First Avenger is now a museum piece and Phil Coulson’s modern update from The Avengers is nowhere to be seen. Now, Captain America wears a tactical suit, and his trademark circular shield has a coat of dark paint over it.

The greatest soldier in history is having a bit of an identity crisis.

Without a war, Captain America is doing the job of a spy and he is very deadly and very effective. The hostage rescue on the Lemurian Star shows a Captain America that isn’t afraid to do some damage. Batroc’s mercenaries don’t stand a chance.

Over the course of that mission, Captain America just keeps escalating. He starts off by choking some guy out, but then follows it up with full force kicks and body slams. He pulls a knife off a downed target and flings it hard, pinning a mercenary’s hand to the wall. The message is abundantly clear that Steve has no problem hurting people. If you’ve got any question about how deadly Steve Rogers is, just pay attention to Steve’s surprise attack against Batroc.

From Batroc’s perspective, Captain America’s shield comes crashing through the window without warning. It comes straight at Batroc’s head with enough force that when it misses his skull, that shining symbol of America gets embedded deep inside a metal bulkhead. There is no way that Steve Rogers intention was anything other than removing Batroc’s head from Batroc’s body.

Captain America is still at war.

“I thought you were more than a shield” Batroc says, daring Steve to stop playing it safe.

If that dialogue doesn’t exactly ring a bell, it’s because it’s spoken in French (even though Alexander Pierce would remind you that Batroc is Algerian). It’s also the theme of the entire movie.

Despite his virtue, the more time Captain America spends serving Nick Fury, the dirtier his hands get. Fury is patient with Cap, stating that he doesn’t want Rogers to do anything he’s not comfortable with, but later in the same conversation tells him “it’s about time you get with that program, Cap.”

When Captain America fell in the ice, things were simpler. His enemy’s were America’s enemies. They were foreign and verifiably evil. In the new United States, America isn’t technically at war, so Steve Rogers is fighting terrorists and taking out pirates.

And Steve Rogers is getting tired of cleaning up Nick Fury’s messes. The people surrounding Cap represent the options weighing on his mind.

Sam Wilson is a fellow veteran who’s left military duty behind and lives a quiet life of service. “The number of people giving me orders is about down to zero” he says, and you can tell that idea sticks in Steve’s mind.

Peggy Carter is fading away. She remembers him. She’s sorry for him. And she is dying. In this movie, she seems to represent that part of America where Captain America belongs. She’s married another man and had a happy life without him. She’s moved on and dwelling on the past only brings suffering for both of them.

Kate is his neighbor, the nurse who’s makeup looks pretty good for somebody who “just got done pulling a double-shift in the infectious disease ward.” As Steve flirts with her, he’s also flirting with the idea of a normal life. The obvious irony here is that Kate is actually a SHIELD agent sent to monitor Steve, making an accidental mockery of that idea.

On the other side, Black Widow represents the idea of giving in to the new function of the United States military industrial complex. “She’s comfortable with everything” Nick Fury says, as he explains to Steve how the world works now. They’re both fighting for America’s best interests, so what would be the difference if Steve just let go of his moral compass and just did the job? Black Widow is whatever the situation needs her to be.

Following that idea to its inevitable end is Steve’s darkest fear: The Winter Soldier. The Winter Soldier is a mindless tool of the state. A weapon only brought out to execute the will of whoever happens to be in charge. If Captain America serves America blindly, then how is he any better than what Bucky has become?

Since we’re talking about the title character, we should also talk about the significance of the name. While the title of the film is clearly referring to the character played by Sebastian Stan, the name originates in the Winter Soldier Investigations after Vietnam. In these televised hearings, soldiers publicly exposed the atrocities performed by the United States military in Vietnam.

After Steve Rogers discovers that Hydra has been growing inside of SHIELD, he’s faced with a choice. Does he quietly try to stop them, or does he tear down the system that allowed it to grow unchecked? So when Steve sends Natasha to drop SHIELD and Hydra’s files on the Internet for everyone to see, it’s Steve that becomes the Winter Soldier.

In the final fight, Steve Rogers himself becomes a symbol of America’s struggle between freedom and security. Bucky is just there to make it personal to Steve. Those helicarriers are ultimate government power. The Winter Soldier is unquestioning obedience to the state. Steve Rogers is willing to sacrifice everything to stop them, even sacrificing Bucky.

While the hope of pulling Bucky back into the world is an outward reason for Steve to put on his old red, white, and blue uniform, that uniform is a visual cue to the audience that Steve is fighting to reclaim his old identity. The helicarriers go down one by one. Once they are disabled, Steve drops the shield and surrenders to the onslaught of the Winter Soldier.

If the state wants to destroy Captain America, then Steve is willing to sacrifice himself to redeem it. For a man who lives to fight, to see Captain America just sit there and take endless super-powered punches to the face is jarring. The onslaught of the Winter Soldier is something that Steve could fight, but he chooses not to.

Seventy years ago, Steve Rogers sacrificed himself to save the world from an oppressive government. He left the world behind and he was revived again to live in a world that left him behind. Steve Rogers just can’t catch a break.

At the end of Captain America: The Winter Soldier when the world is on the line, Steve Rogers makes that same decision all over again. And as the world is saved he makes that decision again for one man: Bucky. As Steve Rogers plunges into the water again, his story repeats, but this time he has a friend to pull him back out.

Next up: Guardians of the Galaxy.