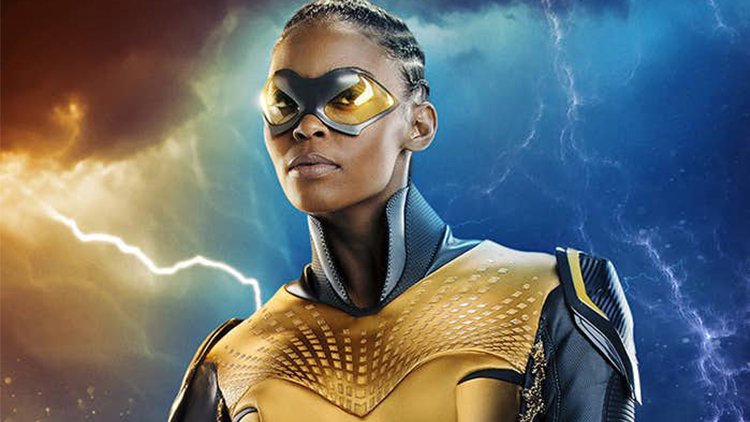 In the aftermath of the latest killing, Black Lightning (Cress Williams) works to clear his name while also hunting down the person responsible for his father’s death, and anyone else involved. Tensions remain high between Black Lightning and Gambi (James Remar) (The CW)

Estranged from Gambi, Jefferson makes contact with another ally, Inspector Henderson. After Lady Eve got shot and Black Lightning became the prime suspect, I thought this partnership was as good as done. However, Henderson knows that Black Lightning didn’t do it. Jefferson still wants him in on the take down of Green Light, because he is the only good cop in a department of corruption. Inspector Henderson agrees to help Black Lightning, outside of the department, if he promises that should something happen to him, his family know the truth, that he was a good cop. Both men agree. Throughout the course of the episode, we see Henderson, incognito following the group who was manufacturing Green Light and getting photo’s of them in action. Two of the main players were Martin Proctor of the A.S.A. and Deputy Chief Cayman, of the Freeland PD. Seeing Inspector Henderson out in the field, doing detective work, definitely calls to mind Gary Oldman’s Jim Gordon, in The Dark Knight Trilogy. I enjoy seeing proactive law enforcement on superhero shows and film. No need to make them utterly useless, just because there’s a superhero present.

While Henderson and Black Lightning are on a hunt for those involved with Green Light, Gambi is determined to make things right, by trying to trace the buyer and sellers of the weaponry that mimicked Black Lightning’s powers. To get what he needs, Gambi injects an informant with a poison, and bribes him with the antidote in exchange for information. When he gets what he wants, he moves to the seller, to find out who they were sold to. Gambi hacks the sellers personal info, including his real name and address, threatening to turn it over to the authorities, if he doesn’t get the name of the buyer. The moral of this part of the story; Don’t mess with an Italian tailor scorned. Despite all this covert badassery, Gambi still has time to finish Anissa’s upgraded costume and meets with her unbeknownst to Jefferson to give it to her.  While his secrecy was misguided, his love for the Pierce family is as strong as ever.

Speaking of Anissa, she spends a good majority of the episode with her sister Jennifer, who is still frazzled over burning her phone, after her lightning powers emerged last episode. She begins to question her sanity, eventually chalking the experience up to a reaction to smoking too much weed. Anissa eventually admits to her sister that she isn’t losing her mind. Anissa tells Jen, that she too has powers, eventually revealing that their father is Black Lightning. Jennifer doesn’t believe her, so she proves it, by lifting Jennifer’s bed, with her in it. Jennifer is absolutely freaked out, storming down the stairs and into her father’s arms. When her parents confirm everything Anissa said, Jennifer is scared and furious. When she’s had a little time to process everything, there is an emotional scene between her and her mom Lynn. She tells her mom, that she just wants to be normal, live her life, get married and have kid someday. Her mother admits to not having all the answers. The tears between the two feel genuine and these heartfelt scenes reminded me of early Smallville Season 1 moments, between Clark and the Kent’s. Later on in the episode, Jennifer and Anissa share bonding moments, where Jennifer asks Anissa what it’s like being Thunder. Jennifer then tells Anissa that if you search Black Lightning and Thunder online, Thunder has more followers compared to Black Lightning. It makes sense that a teenager would track that sort of thing, and their reactions were great. For maybe the second time in this series, Jennifer and Anissa finally feel like legitimate sisters. Usually, Anissa has been more like a mother figure to Jennifer in previous episodes. This is easily the best performance by China Anne McClain. It’s the first time I cared, or felt any connection to her character and performance.

The main fight sequence involves Black Lightning and Thunder raiding the warehouse, where Green Light is produced. They destroy all the product. Of course, they are attacked by a mix of security and goons. I thought the fight choreography was non existent in this scene. Both Thunder and Black Lightning, throw there adversaries into walls and across the warehouse. Despite lackluster fight choreography, the scene where Inspector Henderson saves Black Lightning from being shot in the back was a great way to cement their partnership. For me, it also called to mind, the scene where Jim Gordon saves Batman from The Joker in The Dark Knight. This wasn’t an action scene, but during the scene where Jennifer and Lynn discuss her superpowers, the characters of Vixen and Supergirl are mentioned by name. Some take this as confirmation that Black Lightning is a confirmed part of the Arrowverse. My take, remember that on this show, DC Comics exists as a company. Therefore, Supergirl and Vixen are being referenced as comic book characters. I truly hope Black Lightning stays clear of connecting with the Arrowverse. It’s far better than any of those shows currently, and I don’t want it to get bogged down with forced connections, especially with the crapfest that is the current season of The Flash.

This episode featured Gambi kicking ass, we saw the first real superhero team up of Black Lightning and Thunder, and moments that actually makes me care about Jennifer, is largely a win. However, mediocre fight sequences and a lack of Tobias Whale, takes things down a notch.

Previous post Master Yoda Will Be CGI If He Gets a Solo Spinoff Film, And How’d They Keep His Cameo A Secret?