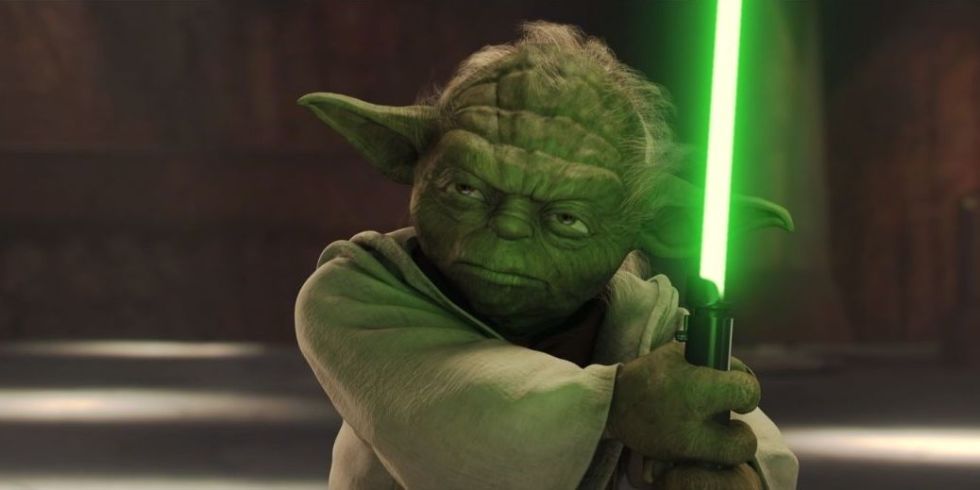 One of the great joys of The Last Jedi, regardless of if you loved or hated other things in the movie was seeing the ghostly apparition of Master Yoda appear to Luke at Ahch-To. He looked just liked he did in The Empire Strikes Back when Frank Oz puppeteered him on Dagobah.

But with rumors of a Master Yoda spinoff film happening, Oz was asked by IGN about his involvement with the film.

“You know what, I keep hearing that and I know nothing about it, believe me. That’s way too difficult for me. I rehearse a long time just to do one line of dialogue [as a puppeteer].”

Master Yoda was CGI in the prequels, and Oz just voiced him. The rapid movements and fight moves that the story called for would be too difficult for them to do it convincingly with a puppet. “CGI” has this negative connotation, but it is a wonderful tool when used correctly. Oz seems to know where that line is.

Another positive would be secrecy – if all Oz had to was voice him, he could, hypothetically, record his lines anywhere. There would be no need to see him on set, like when he has to actually control the puppet. That was a problem that they ran into this time around, but Lucasfilm managed to keep it a secret by lying, or having Oz lie at least. He relayed the story, again to IGN:

“I was told that that was going to be the surprise of the movie, so when I went to Pinewood I had to be a secret there. Although if people saw me… people DID see me, but if they questioned me it would have been fine because I shot Little Shop of Horrors … there, and could have just said I had some meetings for movies. But the idea was to keep me off the credits. I was asked, ‘Could you have your name off the poster?’ and I said ‘Sure.’ So the idea was that that would be the surprise.”

The folks at Lucasfilm are masters when it comes secrecy and leaks, so this doesn’t surprise me that they pulled it off. It is still very impressive in this day and age though.

I don’t think they should do a Master Yoda film at all, but if they do, CGI is the only choice. The technology is good enough to make it work. Even if they mix some motion capture in there for facial expressions and stuff, it will be still be effective. Just look no further than War For the Planet of the Apes for evidence.

Do you want a Master Yoda film? If so, how do you feel about the CGI aspect?