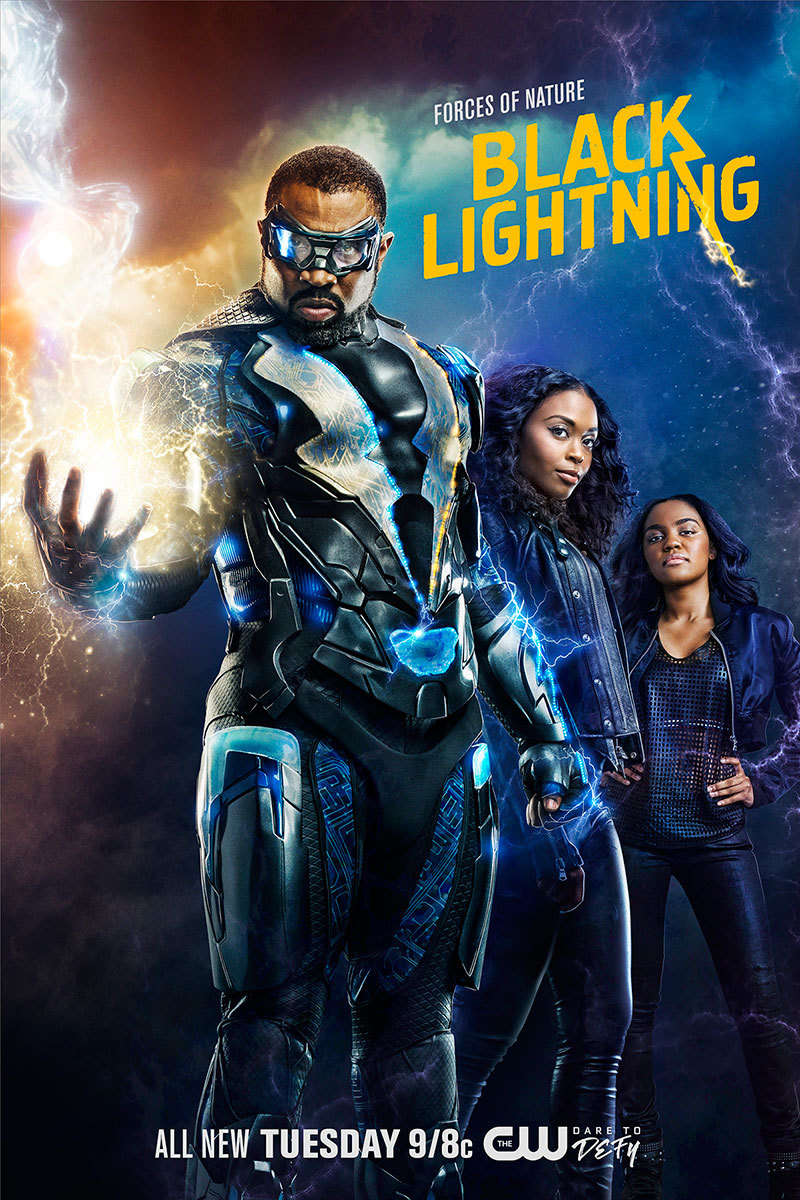 The episode begins with Jefferson and Anissa training, while news reports of reactions to Lady Eve’s death, play out on the local news. People have full on turned on Black Lightning, spinning all the good that he’s done in the past and recent present, into a negative. While we didn’t see much of her public persona on the show, Lady Eve was thought of as a pillar in the community of Freeland. This turns up the heat on the manhunt for our shows heroic vigilante tenfold . As for the training between father and daughter, Jefferson uses a holographic rendering of an urban crowd, mixed in with his own attacks to train Anissa. He preaches not letting her emotions get the best of her, nor being reactionary in situations. The holographic simulations they were using looked cool. Think of the whole program, as a cross between some of Tony Stark’s computer tech in the Iron-Man films, and the X-Men” Danger Room.” The ironic aspect of Jefferson’s advice, is that Anissa used her emotions and reactionary personality, to save her father from exploding to death, after they discover the weapons used to kill Lady Eve, which were set off by a supposed civilian, when he discovered them in a forest. I loved the detective work aspect that Jefferson and Anissa used to locate the weaponry in the first place. Scenes of them breaking into the morgue, noticing that the burns on Lady Eve were radioactive, and then using satellite technology to track that radiation. All these scenes gave me callback’s to stuff you’d see in The X Files and Buffy the Vampire Slayer, two of my all time favourite shows.

There was no Tobias Whale in this episode. Instead, this episode focuses on the man who was surprise resurrected at the end of last weeks Black Lightning episode. That man being Lala, who was killed by Tobias in an earlier episode. As I had thought, that weird embalming we saw Lady Eve performing in previous episodes, somehow resurrects people. I suspect it may involve Green Light but at this point, that theory is unconfirmed. Lala is clearly confused. He doesn’t remember how he died, or even why or how he returned to the land of the living. At the end of the last episode, a tattoo of Lawanda White, the woman Lala killed earlier this season, mysteriously ghosted itself onto Lala. Now, he’s having visions and conversations with Lawanda. Even weirder, there’s a make out/shower scene between the two of them. You read that right! Has he lost his mind? Is she a ghost? Damned if any viewer knows at this point, but some supernatural level $#^+ is going down on Black Lightning! Fans of either Supernatural or Constantine are either typing up, or have launched a petition for a crossover, likely as you read this!

The subtitle of this episode of Black Lightning is “Revelations”, and that’s exactly what happens with Gambi and Jennifer. As this episode begins, we see two cars parked in an empty lot. One car belongs to Gambi, the other belongs to the A.S.A. Operative assigned to Freeland. The operative informs Gambi, that due to his failure in obtaining the location and assisting in the capture of Black Lightning, outside assistance is being brought in to do the job. This tells me that Gambi was using his old position and clout within the A.S.A, to shield Jefferson and his family from their capture and persecution. He’s playing a bit of the double agent role here. This scene gave off some Alias vibes! Though, Alias did it better because, well, Jennifer Garner! The walls continue to crumble in around Gambi, when Lynn finds that a powder found amongst Alvin’s articles, matched the components that make up the drug Green Light. When she asks Gambi if he knows anything, or can help her, he cracks a little, admitting he knows more than he let on and needs to come clean with Jefferson. He tells Jefferson that it was the A.S.A. That injected those kids with the vaccine in the late 80’s and he was sent to Freeland to track them, their abilities, and to keep them in check. However, he quickly discovered the unethical practices and tests the government wanted to and did perform on some of the kids with the metahuman gene. He had a change of heart and leaked inside information to Alvin Pierce. That information would eventually get Alvin killed. After learning of Alvin’s death, Gambi began looking after Jefferson. Gambi’s past and connection to the A.S.A. and Green Light, runs deeper than I thought it would. While I understand why Gambi’s done everything he has, Jefferson’s anger and reaction, puts this betrayal right up there with Judas, turning over Jesus! It’ll be interesting to see if and how they fix this! Hopefully it plays out over a series of episodes, instead of a rushed reconciliation in one episode. In terms of Jennifer, the obvious happened, and we saw the first examples of her lightning powers manifest. I won’t spoil the how and why of it all, but as of now, I’m not on board with this development. I don’t like how the character is being written, and the actress playing her isn’t blowing me away. This character has the potential to go down the Iris West, Felicity Smoak, and Lana Lang path, which for me, is not a good thing. The writers and actress are going to have to pull off something real good, for me to eventually buy her as a superhero.

Aside from Jennifer, I had no problems with this episode. I was happy with the answers given to some burning questions, set up throughout the season. Yet, it felt like something was missing. Or, maybe the other two episodes were so good, they’d be tough to beat. Still, this episodes once again proves that Black Lightning is currently the best of the DC/CW shows.

Previous post GOTHAM’s Camren Bicondova Talks Catwoman With Us, Says She’d Be All In For GOTHAM CITY SIRENS

Next post SCOOP CONFIRMED: Zak Penn and WB Want To Turn THE MATRIX Into A Cinematic Universe