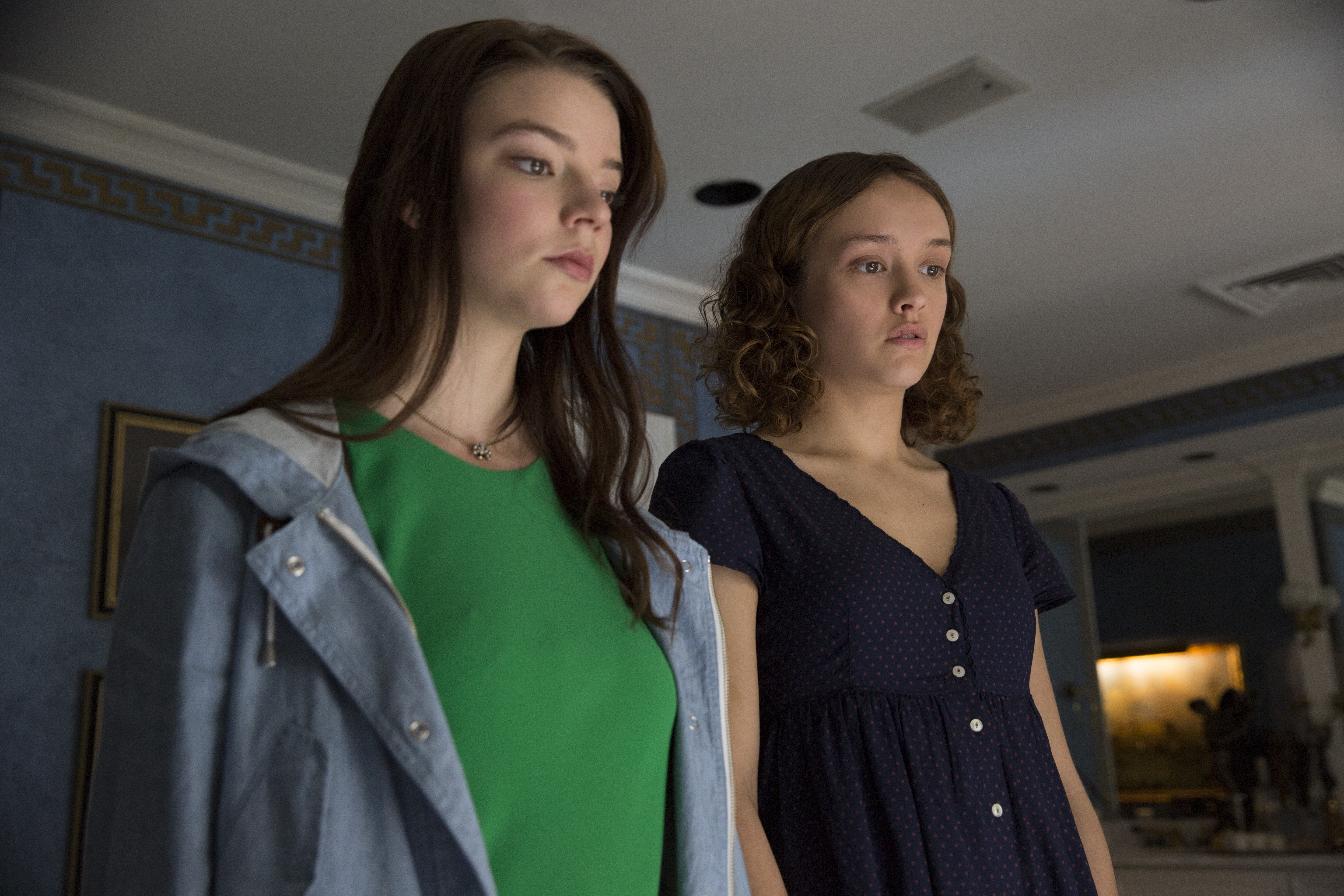 Last week, I sat down with director, writer Cory Finley of Thoroughbreds to go a little more in depth into the movie. After all, I had so many questions!

Cory was super pleasant, and has a brilliant mind. We will definitely see more of him in the future, because everyone is raving about this film. Including me. In just a few months, this Sundance baby is already up on her legs and has begun to run.

Give my exclusive interview a read!

Vanessa: You must be thrilled with the positive way your film has been received, and I thoroughly enjoyed it.. no pun intended. [laughs]
Cory: Oh good, don’t think I’ve heard that pun yet.

Vanessa: Really?
Cory: You’re the first. So congratulations. One of the better puns I’ve heard.
Vanessa: Okay, I was going to say… you’ve probably heard that all day.

Vanessa: Alright, so let’s just start from the beginning. From watching the film, most
people might not know that not only are you a director and screenwriter, but you’re also a
playwright. And correct me if I’m wrong, the movie was actually adapted from a play that
you wrote.
Cory: It was. It was indeed.

Vanessa: So, what made you want to tell this specific story?
Cory: You know, it sort of started with an image. It started with an image involving difficult
moral decisions about a family horse. And I think that image sort of touched on my
memories of watching my family and being a part of family decisions about whether to put
down family pets. It was kind of my first experience with death and a very sort of, you know,
morally speaking complicated experience. It started with that image and view that
thoroughbred horses were tied to a very specific social class and a place in America. And I
was interested in diving into some of my own conflicted feelings about wealth. Out of all
that stew of concepts, these two characters emerged and since it was a play initially, I just
put them down on a couch and let them talk to one another and the story came out of that.

Vanessa: You talked a little bit about your feelings about money and class. And you know, for
everyone that makes art, we know film is art. Art is art. But when you are putting together a
film out there into the world, it also requires some savvy with money and budget.
Cory: Right.
Vanessa: How has your art been shaped by any money you’ve had. Were there any
budget limitations you had to deal with?
Cory: Yeah, we definitely had limitations. So it was interesting because for me coming from
tiny basement theaters and persuading my friends to like, hold a light in the corner and that
sort of thing. Being able to work on this scale was incredibly thrilling. But I think for most of
the people involved, this was one of the more smaller, independent films. Certainly both of
my leads were coming from and going to much bigger movies and so, I think there was this
mix of feelings. And also, we were shooting in these incredibly opulent homes but we were
doing so in as fiscally responsible a way as possible.

We had twenty-two days, which again, for me was a wonderful luxury and was plenty of
time, but I think for everyone involved it was certainly a little tight. So, it was interesting
because I think the feeling was that, [we were] feeling really fancy because of the homes
that we were in, but also feeling very frugal because of our budget.

Vanessa: Wow, you shot the film in only twenty-two days?
Cory: We did, yes. It was seventeen of those in the house and then five sort of jumping
around picking up locations. I guess the perfect illustration of that, the tension between the
rich and the frugal was at the big, white room where you see Lily and her mom eating a very
fancy, rich meal at this upscale spa. It was actually a nail salon next to our production office.
We just cleared out everything and our production design team had brought in fancy grass
and stuff to make it look like a spa. But it was a whole, pure smoke and mirrors in that shot.
If you moved the camera a few inches in either direction, you would have realized you were
at a nail salon.

Vanessa: Speaking of your two female leads, I was really excited to watch a film helmed
by two super talented women. And the rest of the cast was fantastic too. How did you guys
go about casting? What was that process like?
Cory: We were very fortunate to get our easy top two choices for both of the leads. And I
knew from early in casting that for Amanda we wanted an actor who was a real artist of the
dead pan. And I’ve seen in a bunch of Olivia’s movies that she has a great multitude of
talents, but one of them that always stuck out was that she had an incredible comic timing
and a real facility with the dead pan. Some of the scenes in her movies [I saw] where she
was able to, you know, verbally stick it to her scene partner. It felt like it was a particular strength. That was part of why I thought she was such a good fit for her role.

And then Anya, I had just seen The Witch, which had just come out when we were putting the movie
together. And that couldn’t have been more of a different physical world. Just her intensity
in that role and the credibility of some of the really operatic emotions that she had to reach
really just blew me away. And so, both of them were easy choices and what was and
remains super gratified that they wanted to do the movie.

Vanessa: Yes, the back and forth they had together, the chemistry really jumped off the
screen. And personally for me, it reminded me of my little teenage, girlfriend relationships
growing up. I went with a girlfriend of mine actually and seeing that on screen, it took us
back.
Cory: There was a very early draft of the play… Amanda’s character or Olivia Cooke’s
character was actually a male friend. And then, in the spirit of possibly trying everything, as
soon as I made her a female character, something popped about their relationship. And I
think it was even just from talking to my own girlfriend or my sister, just all the women in
my life about their high school friendships. I do think there is a particular intensity to
friendship in those years that makes for good on-screen chemistry.

Vanessa: One of my favorite moments in the film actually coincides with the way the
film uses music and sound. The part with the rowing machine upstairs and her (Lily) being
isolated downstairs.
What was your favorite moment if you had any?
Cory: Yeah I’m glad you like that. That was like our “Tell Tale Heart.” Our Edgar Poe
moment. We were always looking for ways to keep it visual and to get it out from just the spoken and
the verbal. I think living with it for so long, my favorite has shifted many times over. But I
think I’ll always have a special place in my heart for the scene in the wine cellar, which is all
one take. Where they’re kind of first talking about the possibility of the murder plot. And it
was a very challenging scene to get, just a very technical shot. We had a door that the
camera needs to pass through that mysteriously locked on us in the middle of the night. We
had to wait for a locksmith to come. We had to wake up the local locksmith. And we did
thirteen or fourteen takes of that scene, each one lasting five minutes or something like that.
It was the last one that we ended up using, where they kind of hit all their marks perfectly
and all the acting was on point. It was a tough scene to get and one that I enjoy watching.

Vanessa: What’s the organizational process like for you?
Cory: We definitely have a pretty strict plan and everything that we’re going to get. And
there were days where we didn’t get everything and there were a couple days where we got
ahead, and that’s always wonderful and rare. I knew that as a first time director, there were
so many pitfalls and unexpected possibilities on set. I was really urged by the producers to
over prepare so that everything was very tightly shot listed and carefully story boarded. We
made a lot of changes on the day, we were also surprised by wonderful quirks in performance. There were a lot of happy accidents in the movie but we definitely had our
marching orders set out.

Vanessa: As a first time director, were you always on board to direct? Did you guys
consider other people along the process?
Cory: I always knew that I wanted to direct. And I sort of didn’t know if I would be allowed
to direct it. Never having done a short, or never had any work sample as a director. But I
think it’s a testament to the trust and the collaborative nest of the producers involved, that
they and the cast who came on board after were willing to take that jump into the unknown.
I think in playwriting, the writer gets such an awesome degree of input throughout the
process, certainly for premieres of plays. Once they go off regionally into other theaters, it
certainly changes. But I’d always been able to talk with the actors all throughout the process
and to have input in design and what not. And I knew that just because of the way that film…
the differences and how production unfolds, that so many of those duties go straight to the
director out of necessity and to the writers and all. So, going from playwriting to directing
for me was almost just about keeping the amount of creative input that I had, that I got used
to in playwriting.

Vanessa: That’s fantastic and a really nice bridging of the two. I think some people are
already calling it a future cult classic. I’ll close off the interview here with … so what’s next?
Cory: It’s a very good question and one that kept myself awake thinking about for months. I
do have a bunch of different projects, a handful of projects that are kind of in different
stages in development. And none of them are yet ready to be publicly unveiled. But I’m
definitely thinking carefully about that next move. I have a couple things that I’m very
excited about. They’re carrying on the character driven aspect of Thoroughbreds and
playing with the genre in similar ways, but continuing to slowly increase the scale and scope
of the story telling.

Previous post LOGAN Team Set to Reunite for THE FORCE