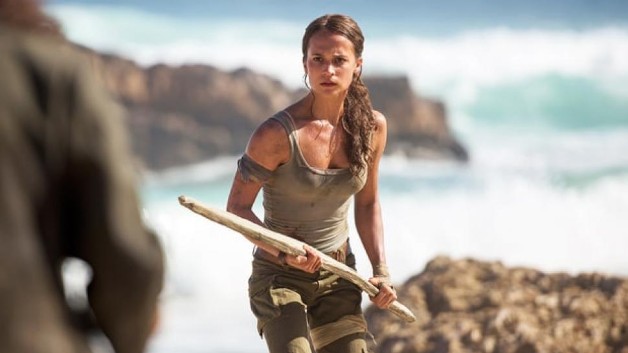 Tomb Raider games have sold over 63 million copies worldwide and Lara Croft has become one of the world’s most well-known female protagonists, paving the way for many others after her.

I had the opportunity to catch an advance screening of Tomb Raider earlier last week. I’ll admit, I was skeptical going into it. The trailers for the movie are just okay and influenced my skepticism before I caught the film.

However, the movie was a whole other experience.

I’m shifting in my seat.

Slowly, and little by little, I’m getting into it.

The movie begins immediately with some cool sequences that really set up that this is an origin story. We find our Lara on the streets of London, not in her mansion. Cool, I thought, I like that choice. Throughout the movie, you’ll see her transition and a clear progression from “Londonite” to “Warrior.”

Then, something unexpected happened in the middle of the film.

There was a problem with the projector and the movie kept stopping, starting and looping for the same 3 seconds at a crucial, emotional moment. The audience erupted in boos and cheers for Lara. Hey, at this point, people were invested. I was totally into it by now. I joined in on the cheers and boos. Skepticism faded. Let’s get on with it! I want to see more.

They finally fix the problem. They start at the wrong point.

Everyone screams to the projectionist, “Noooo. Not that part. Go forward!” It was incredible to see. And this was a big theater with an insanely large screen.

Okay…… we’re back into the action. I won’t spoil the rest.

Roar Uthaug (director) crafted a vision of Lara Croft that was not only satisfying, it was believable. That was the problem that I had with the previous Tomb Raider. In this one, we have a Lara that an audience can relate to. A Lara that fails, messes up, has human flaws so that we become more invested with her story.

The thing Roar Uthaug did right was that the set-up is done so well in the beginning, you root for Lara Croft throughout the film. I also enjoyed that she had to earn my trust as an audience. A lot was riding on Alicia Vikander in this role. Can she pull it off? A lot of people thought… And when she does completely pull it off, the payoff is so satisfying.

Vikander also gained 10-12 pounds of muscle to play this iconic role. Plus, she did her own stunts. If Lara Croft paved the way for female protagonists in video games. Then, Alicica Vikander is following in those footsteps and paving the way for female-led fantasy, action films. Alicia Vikander brought her A-game.

And I say right back atcha’ girlfriend.

Next post BLACK WIDOW: What Scarlett Johansson Wants to See in a Solo Film