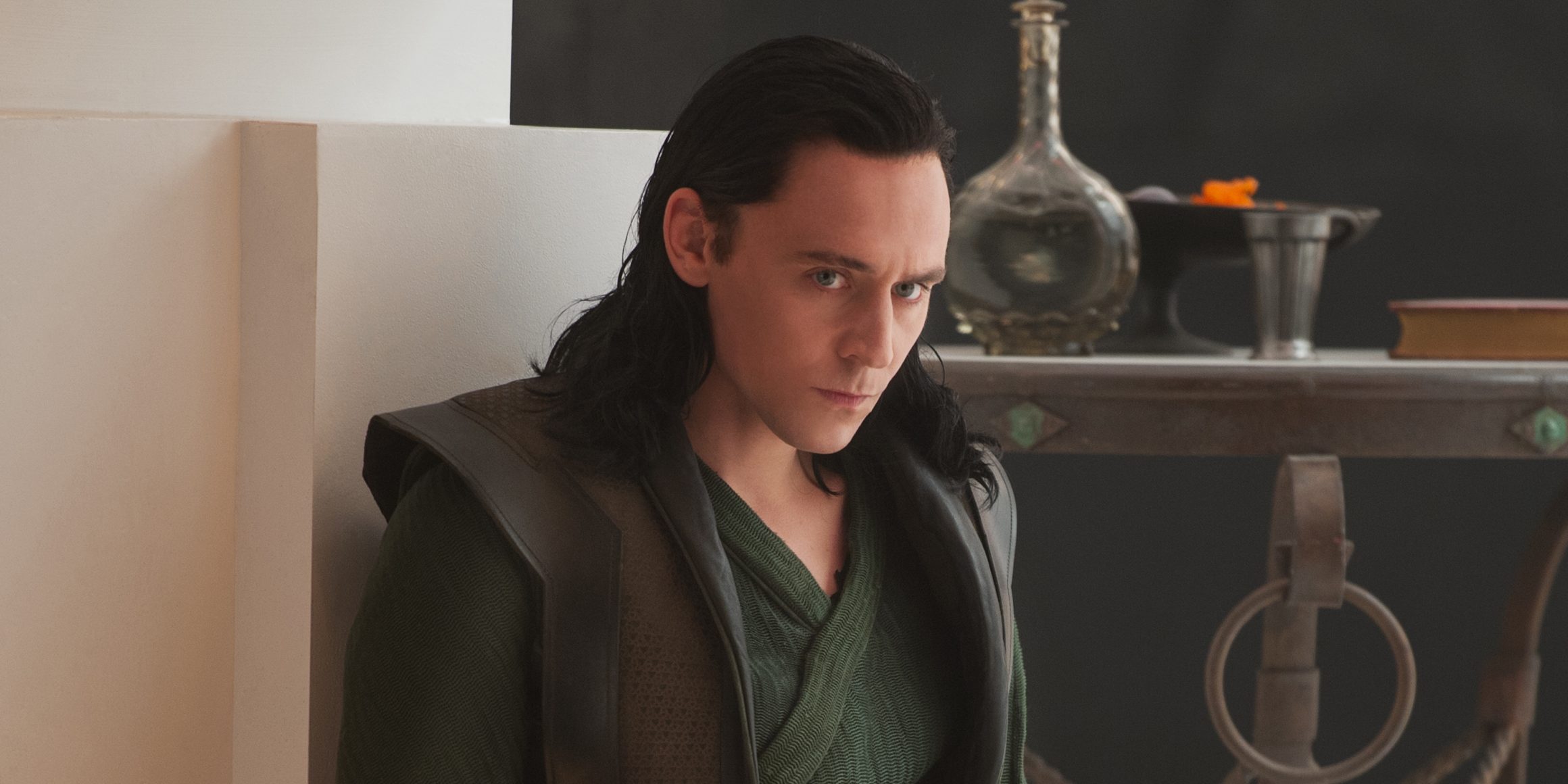 Thor: The Dark World is not the best the MCU has to offer. It’s not particularly good or bad. The film’s villain Malekith is mostly remembered for how forgettable he was. The director, Alan Taylor, has not been asked to return for any future MCU installments and based on his comments, it appears that the film was taken away from him in reshoots.

We know that Joss Whedon was involved in those reshoots, although officially it was just to tweak the dialogue of a few scenes. The official story was that after the popularity of The Avengers, Marvel wanted to add more scenes into Thor: The Dark World that would give the people what they wanted: Loki.

They also happen to be the best parts of the movie.

When Thor: The Dark World starts, Loki is being brought forward to stand trial on Asgard for his previous crimes in Thor and The Avengers. You might expect a jury of his peers or some kind of lawyer, but on Asgard all that you get in a trial is Odin telling you what your sentence is. The whole scene is surprisingly short and Loki is banished to the dungeons of Asgard for the rest of his life, possibly five thousand years, give or take.

Loki laughs and jokes throughout, because that grin is his self-defense mechanism. If you watch the scene closely, the moment when Loki starts to show signs of sorrow is when Odin hits Loki in a way Loki didn’t realize he could be hurt. Odin forbids Frigga from ever contacting Loki.

“Frigga is the only reason you’re still alive and you will never see her again.”

And in that moment, Loki’s mask of humor drops. You get to see the real Loki for just a moment.

Or maybe you don’t. You never quite know with Loki.

Loki is one of the most layered characters of the MCU, and Tom Hiddleston’s performances are astounding. Just think about all the emotional beats that character has to cover.

Loki is heir to the throne of Asgard, but he’s the second son behind the mighty Thor, and everybody loves Thor. Thor is the hero of the people, mighty, handsome, and (up until the events of Thor) a bit of a jerk. But living under Thor’s shadow is only the first layer.

On the same day that Thor is exiled and finally gives Loki that clear path to the throne he’s always wanted, Loki discovers that he’s not really the son of Odin.

In fact, he’s actually the son of Laufey, King of Jotunheim, and Jotunheim is a freezing cold, poorly lit planet full of Frost Giants. Oh, and apparently Loki was discarded for being too sickly or small, so he’s actually the rejected heir to a throne Loki didn’t want anyways.

And what does Loki do after he realizes he’s got another father out there? Loki plots with Laufey to have Odin assassinated, only to then double-cross Laufey, stabbing his actual father in the back to gain the approval of his adopted father.

Loki always wants a little more. Loki wants to be Thor’s equal. Loki wants to be a king. Loki wants the approval of his father. Loki is always searching for something outside of himself to fill the whole inside that just can’t seem to be filled no matter how desperately Loki tries.

Whether or not he realizes it, Loki considers himself unworthy of love. And, as many people who find themselves in this situation do, Loki has decided to take control in the only way he knows he can. By hurting the people closest to him before they have the chance hurt him first.

And that’s where you get the smiling Loki. That Loki is an image that Loki puts on like a costume to trick the world into thinking he is in control.

The height of this posturing is Loki in The Avengers. That Loki is “burdened with glorious purpose” and comes to “free humanity from freedom.” He gives speeches and monologues as he warns them all that he will be their king.

He’s so showy that even Tony Stark refers to him as a “full tilt diva on opening night.”

Because if Loki can’t be famous, he’s going to be infamous.

And despite what Loki thinks of himself, despite everything he’s done, when Thor arrives to intervene on earth’s behalf in The Avengers, Thor starts by welcoming Loki home. Thor begs Loki to turn his back on all this and just come back to Asgard with him. “You come home” he says, and you can see the look on Loki’s face that says he wants to, but he’s in too deep. And that’s when he puts the mask on again and switches back to the smirk Loki is so famous for.

Thor gives Loki one more chance before the end of The Avengers, but this time Loki looks to the sky full of Chitauri attack vehicles and knows that what’s coming. “It’s too late to stop it” he says, with a look of despair on his face.

You can see the hesitation in Loki’s eyes. He could turn back. He and Thor could work together to return the Tesseract (and now the mind stone) to Asgard, but deep inside Loki is haunted by that self-loathing.

Loki believes deep inside that there is nothing he could do that would redeem him. There’s no way that Thor and Odin could love him enough to truly forgive him for what he’s done. Loki takes the only option he feels he can, as he literally stabs Thor in the back and runs away.

So when we catch up with Loki in Thor: Dark World, Loki is bearing the full consequences of his actions. Actions that trap him in a cage, meant to spend eternity watching guards walk past.

Even with Frigga, Loki’s only remaining connection to the world, he puts on that false face again because he wants to pretend. Loki has convinced himself that if he never stops smiling, then no one will no how full of despair he is.

And this time, Frigga is the one to smile through the pain. “You’re always so perceptive about everyone but yourself,” she says as Loki reaches to her, shaking his head to apologize, his hand slips through her as she disappears. This last time Loki would see his mother, since Loki’s mischievous attempt to send Kurse after Odin ends with Frigga’s murder at the hands of Malekith.

For all his crowing about Odin and Thor, Loki can never compete with his own self-inflicted wounds. Loki just wanders aimlessly back and forth between the person he thinks he is, and the person he fantasizes he should be. Loki wants to be the hero of Asgard, to be beloved by his people, but the thought never occurs to him that he could do that through legitimate methods.

So he lies. He cheats. He murders.

That’s why, in Thor Ragnarok, when we finally see what Loki is like as a king, he’s not all that effective. He’s cheated his way to the throne, so he lacks the leadership skills he would have gained if he worked his way to the top of Asgard.

According to Thor, the Nine Realms are crumbling while Loki sits around in his father’s bathrobe eating grapes. Loki has always identified himself as a king. To be such a bad king just strips Loki of one more self-rationalization of why he can’t be happy. Thor almost does him a favor when he kicks him off the throne.

Loki genuinely seems happiest when he’s aimed towards running Sakaar, the garbage planet. The key-catch of the universe.

So after one more betrayal, Loki steps up to the plate and stands beside his brother. When Thor Ragnarok ends, it actually presents Loki with the most interesting challenge yet.

Loki finally has that legitimate claim to praise he’s always wanted. Loki has accepted Thor’s invitation to stand beside him. Loki knows that Thor is headed to earth, which shows that Loki finally trusts in his brother. Loki has nothing left to hide.

So then who is Loki?

Come back next week when we talk about Captain America: Winter Soldier.