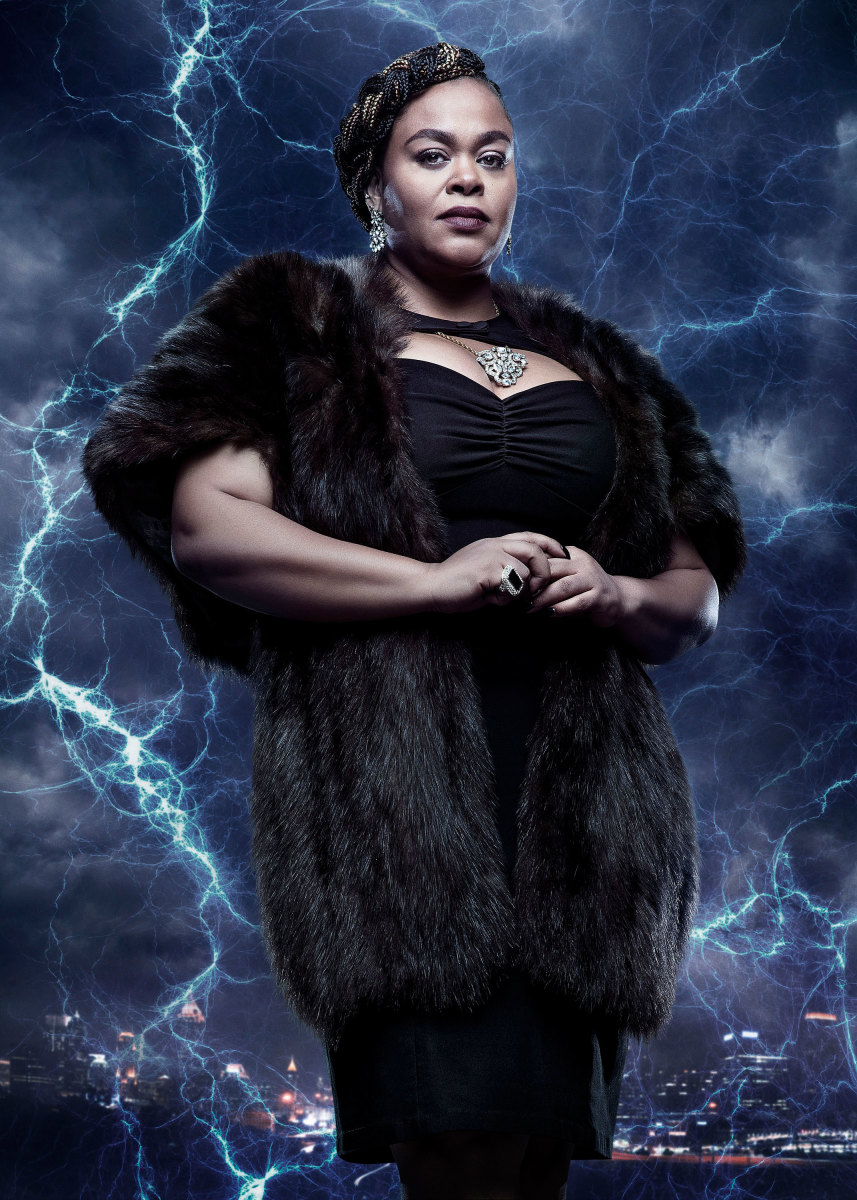 “Black Lightning’s pursuit of Tobias continues; Anissa continues to find herself in the new normal. ” (The CW)

This episode is far lighter on action and focuses more on the fallout of last episode, via character interactions. Jefferson blames himself for not doing a better job at protecting Lynn from harm and for the wounds he inflicted on his daughter, during their fight. Lynn surprisingly absolves Jefferson of any wrong doing. Instead, she blames herself for not noticing Anissa’s abilities, or at the very least, acknowledging the possibility of Jefferson’s powers being past on to Anissa. Especially given her profession as a doctor. She feels she could have done more. The perspectives of both characters are written well and believable You really felt the tension and weight of the world emanating from both Cress Williams and Christine Adams, when it pertained to their daughters burgeoning powers.

Though her bruises heal quickly, Anissa is sidelined from any super heroic action this week. Instead, we see her reaction to her father being Black Lightning. Early on in the episode, she calls out Jefferson as a hypocrite, given that her father is constantly quoting Martin Luther King Jr and preaching non violence. All the while, going out and pummelling criminals as the vigilante in the evening. Her mother doesn’t escape Anissa’s wrath either. When Lynn tells Anissa to no longer peruse her fathers vigilante lifestyle and instead live a normal life, Anissa snaps at her mother, calling her a hypocrite because she doesn’t have these abilities, and has no idea what it’s like. This makes things awkward at the breakfast table the next morning, especially between Jefferson and Anissa in front of Jennifer. I usually really enjoy Nafessa Williams performance, but I felt in this episode, her anger, and frustration with her parents was a little too muted. However, the upside to that negative, is that this episode of Black Lightning, didn’t spend a whole episode focusing on Anissa’s resentment or frustration with her parents. The episode doesn’t waste valuable screen time with Lynn and Jefferson, forbidding their daughter from using her powers to help people. Every viewer knows Anissa will become a superhero and early in the third act, Lynn reminds Jefferson of how stubborn and determined their daughter is, convincing him to train her, so she’ll be safe when out fighting. Lynn also commissions Gambi to make Anissa a upgraded costume, with similar safety precautions to the one Jefferson wears. The fact that this all comes from Lynn, shows tremendous character growth from the first episode to last. It also reinforces that when she pledged her support to Black Lightning last episode, it wasn’t just lip service to dissuade Jefferson from killing Tobias.

While Gambi is tasked by Lynn to create a better costume for Anissa , all is not right in Black Lighting’s inner circle. After finding out that Gambi had known that Tobias Whale was alive and had been in Freeland for weeks but lied, Jefferson was furious. He wanted nothing to do with Gambi, to the point that they were barely on speaking terms. This development reminded me of The Dark Knight Rises, when Bruce finds out that Alfred lied about Rachel’s letter, then cuts him out of his life and fires him. Last week, Gambi met with Lady Eve, where we discovered that Gambi and she had some sort of government past. The two had made a deal. She, Tobias and The 100 would steer clear of the Pierce family and in exchange, Gambi would keep Tobias life and whereabouts a secret. At first I shrugged this off to Gambi wanting to protect his extended family. However, in this episode Gambi meets with Lady Eve warning her that Black Lightning and Tobias are getting to close to crossing paths, which “would tear down the eco system” they’ve built. To deter Tobias a bit, Lady Eve suggest that Joey Toledo be killed. She tells Gambi to do it, and gives him a little box of Albino ashes to leave by the body, to let him know, that Lady Eve was responsible. I was shocked that Gambi went through with it and pulled the trigger. The fact that he did, makes me think that there is more to be revealed about Gambi’s past. I’m so intrigued, and I hope they keep stringing it along up to the season finale. Also, when Gambi pulls the trigger, he looks a lot like The Shadow with his wardrobe! PS: I want a new movie or TV Show of The Shadow, by the way!

The best part of the episode to me is the third act. We’ve got two epic battles happening here, Tobias Whale sends his muscle with guns to Lady Eve’s funeral home, to kill Eve and her body guards. The unique part is that Tobias’ men are using guns, that mimic the electricity abilities of Black Lightning. Tobias Whale clearly has intentions of framing Black Lightning for the mass murders. Meanwhile, in the underground of a newly opened jazz club, Black Lightning comes face to face with Tobias Whale and his enterouge. Both battles were well choreographed and are pulse pounding with surprising outcomes. There are some great new lightning maneuvers and effects on display. I especially liked the lightening force field/shield. There are some grave consequences that occur here. I won’t spoil it yet, for those on delayed viewing, but two deaths occur, promising significant changes going forward. The criminal power structure in Freeland will be changed going forward, and the Black Lightning vs Tobias Whale conflict just got even more personal for one of the combatants as a result.

With this episode of Black Lightning, the show has officially entered into the back half of its first season. As a result, I expect more episodes like these last two. While I preferred last weeks episode more, the third act alone, elevated my grade for this episode. With another strong installment, one wonders if a Season 2 renewal is eminent!?