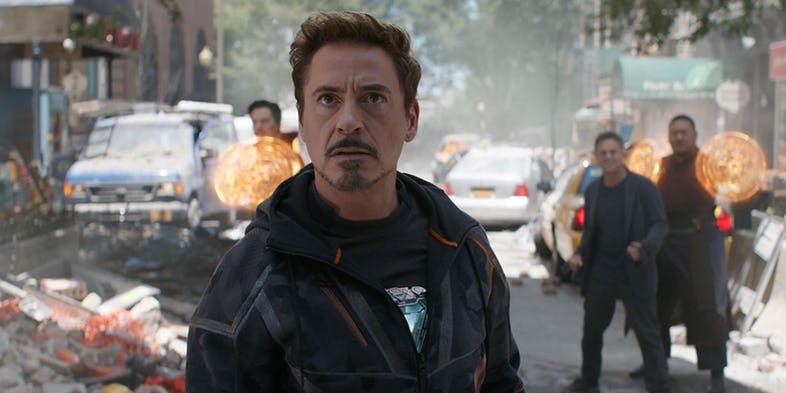 Stakes. When it comes to big-budget blockbusters featuring heroic characters battling villainous characters, it always inevitably comes down to some sort of world-destroying final act where we’re told that the “fate of the world” is at stake. And yet, even with such dire warnings, many of them feel like the stakes aren’t there. We always know that the heroes will inevitably triumph, that no one is going to suffer all that badly, and that the results of the final battle will ultimately ring hollow.

The Marvel Cinematic Universe, in particular, has had somewhat of a problem with stakes. Over the course of their 18 film arc, many entries have suffered from villains that don’t really pose a serious threat and quip-happy heroes who tend to suck the drama out of any potentially dangerous situation with an ill-timed one-liner.

Robert Downey Jr., the man who’s brought Tony Stark, aka Iron Man, to life for the last decade, understands how lacking many films like these have been when it comes to stakes.

“Believe me, I’m tired of every movie, you know, ‘It’s the end! It’s Armageddon! It’s the Be All, End All, Forever!” And then it’s … not,” he candidly tells Entertainment Weekly in a new feature about Avengers: Infinity War. But when it comes to this next, climactic entry in the series, Downey Jr. is adamant that the stakes are very real. “This one actually is. [Laughs] They’re not kidding. This is a heads-will-roll scenario,” he warns.

Infinity War co-director Joe Russo also chimed in with the threat that Thanos (Josh Brolin) poses, and how important it was to set this film up in a way that has the Avengers splintered. “They’re fractured at the start of the movie. It was always the intent, in a larger arc, to split the Avengers up before the greatest threat that they’ve ever seen,” Russo reveals. “Thanos is a virtually indestructible character, which makes him an extremely difficult character to fight.”

Marvel Studios honcho Kevin Feige also sheds some light on where this cinematic version of Thanos and what he’s all about:

“He’s from a planet called Titan that’s no longer inhabited because of things that he thought he could help prevent, and he was not allowed to do that. What he feared most happened, and the planet and everybody on it basically went extinct. He vowed not to let that happen again [and he] thinks he sees the universe going down the tubes. He thinks he sees life expanding outward unchecked. That will bring ruin, he believes, to the universe and to that life.”

It sounds like Avengers: Infinity War has the makings of a truly special cinematic event. Vulnerable heroes going up against a compelling and powerful villain is the perfect recipe for drama.