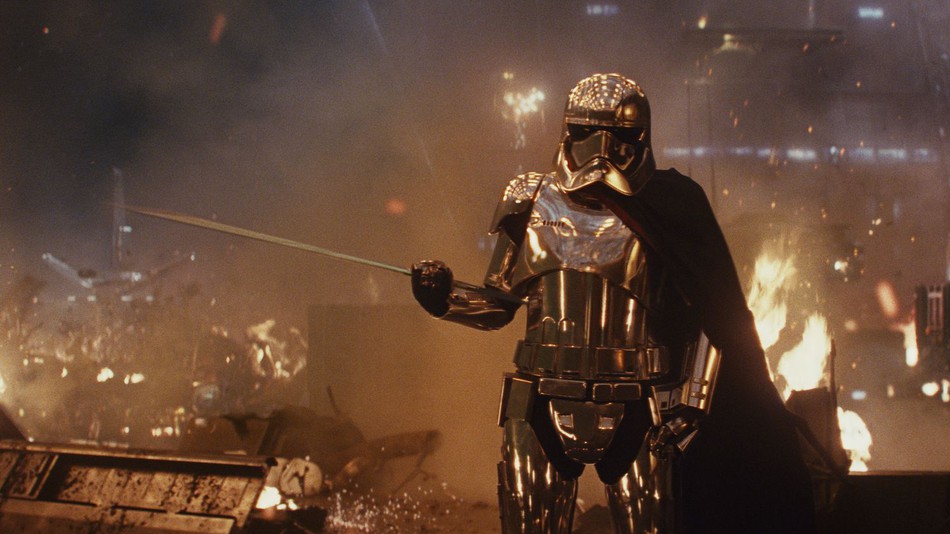 Captain Phasma was one of the more interesting things to come out of the promotional material for Star Wars: The Force Awakens. Her chrome uniform was an instant hit and fans couldn’t wait to see her in action.

Then The Force Awakens came and went, and we still didn’t see much Phasma. She was in it a little bit, but it was a kin to Boba Fett in The Empire Strikes Back. That’s okay, maybe she’ll have a bigger role in Star Wars: The Last Jedi it certainly seems like she has a big important fight with Finn going by the previews!

Well, she did. But that was it. While nothing should be ruled out, it certainly seemed like she met her demise at the hands of the “Rebel Scum” that used to be under her command.

With The Last Jedi gearing up to be released digitally and on home media, there is a new deleted scene released, courtesy of The Star Wars Show. You can watch the scene below, which starts around the 1:38 mark.

I actually like this better. It frames Phasma in a slightly better way. This scene has more depth and gravitas to it, while still keeping Finn’s best line. The scene isn’t even completely finished with effects as you can tell by the reflection of the crew in her helmet. But you get the idea.

I’m not sure why director Rian Johnson didn’t keep this part, but I’m sure he has a good reason. Maybe it was pacing, or maybe I missed some nuance in the fight that made it in, that this one didn’t have.

Previous post WONDER WOMAN Sequel to Begin Shooting in May