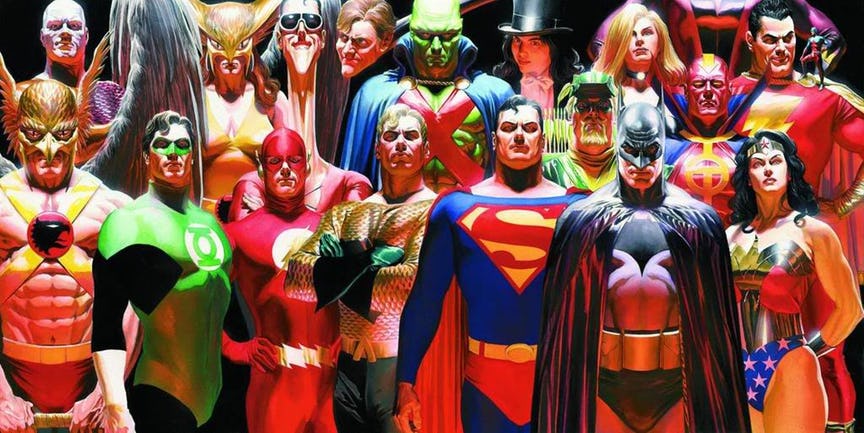 This week, we’re delighted to share a column by reader and listener Trey Jackson. He’s been hearing what MFR has been saying on the El Fanboy Podcast, and what Bill “Jett” Ramey has been decrying over at Batman-On-Film, and he thinks he knows exactly how WB can pull off what so many others are skeptical about:

“Here’s How WB Can Have Its Cake And Eat It, Too (With The DCU)”

Fans of DC are in a unique position, especially those of us who follow RTF.  DC films at WB are in a time of transition in the aftermath of Justice League and its under-performance.  WB execs are (hopefully) thinking carefully about what to do next, and where DC films go from here.  We the fans have an opportunity: Tell them what we want.

They ought to be in a listening mood, even more than usual.  Thankfully, RTF is an outlet that WB pays attention to, an outlet that gives a voice to fans and maintains the kind of integrity that makes it a reliable source for WB to take seriously.  So without further ado, here is what WB should do with DC on film going forward:

The Problems to Solve

In recent weeks, Joss Whedon left the Batgirl “project” (they really couldn’t come up with a better excuse for his involvement with JL?  No wonder they need our help).  Before that, The Flash project went through multiple directors,  Ben Affleck left the director’s chair for The Batman, and both Zack Snyder and David Ayer had their projects taken from them midway through production.  Rumors persist about Reeves and his Batman project, but he’s still attached for now.  The reasons for these troubles are numerous and disparate, but they reflect a larger problem: A lack of vision and confidence.

The rush to a shared cinematic universe is in no small part to blame as well, which brings us to the other problem to be solved: The balance between continuity and artistic vision.

Many have said that trying to maintain fidelity to a director’s vision within a shared universe is WB trying to have its cake and eat it too.  They make good points, but I think the two aren’t mutually exclusive in principle, though the balance is difficult.  But the payoff would be well worth it: A shared universe, with the public’s goodwill, a la the MCU, but with the promise of artistic freedom to attract talented filmmakers who’d produce compelling films in the spirit of Nolan’s Dark Knight trilogy.

By now you’re wondering what sort of pie-in-the-sky fantasy could possibly accomplish all of this.  Read on to find out…

The Bubble Approach – Films that are self-contained, can still see each other, and can merge under the right circumstances

Here’s what WB can do to solve both problems mentioned above.  Establish “bubbles” centered around each of the top DC heroes: Batman, Superman, Wonder Woman, Flash, Green Lantern, Aquaman.  Each bubble contains that hero, their supporting cast/allies, their primary locales, and their villains.  Make it known within the industry that you are taking pitches for multi-film arcs, centered around that hero and taking place entirely within that bubble.  Ideally, this is where Geoff Johns plays his biggest role: hearing these pitches and determining whether or not they do the character justice, and most importantly, whether or not he trusts the director as the caretaker of their character on screen for the foreseeable future.  Only listen to potential directors who will oversee that character for multiple films.  Remember, we’re looking for stability in addition to good movies.  And make it clear that whoever gets the director’s chair has complete control over everything in that bubble (sorry Todd Phillips, but Joker should belong to Matt Reeves for the time being).  Within your bubble, you have complete control.  WB has given that control to you, talented director, because DC and Geoff Johns believe in your vision and trust you to deliver a series of great movies about this character.

So far so good for stability, and those that want to dispense with the shared universe hope I’ll stop here.  But as we’ve seen with the MCU, a shared universe offers incredible potential for well-established characters, and it can be of even greater benefit when bringing lesser-known characters to the screen.  So here is how to have your cake and eat it too: cameos, cross-overs, team-ups, etc. will happen IF AND ONLY IF the directors in charge of the respective bubbles are involved or approve of it.

Here’s how that could work in practice:

Suppose Matt Reeves’ first two Batman movies are a success, and (of his own accord, of course) those two movies feature Dick Grayson becoming Robin and maturing in the role.  At this point, if Chris McKay has an idea about Dick Grayson as Nightwing, he pitches it to Matt Reeves (likely with Geoff Johns at the table).  Since Nightwing falls within Batman’s bubble, nothing happens without Matt Reeves’ say so.  And McKay’s Nightwing film(s) only get made if Reeves has complete confidence in McKay to operate within Batman’s bubble as established by Reeves himself.

Another possibility: Wonder Woman is already in good hands with Patty Jenkins, and by all accounts so is Aquaman with James Wan (here’s hoping those two are on board for a long time).  Suppose Jenkins is working on the script for Wonder Woman 3, and has an idea involving the Atlanteans that she wants to bring to the screen.  Within the bubble arrangement, she reaches out to James Wan and shares what she’s thinking.  At this point, Wan can either decline, approve, or better yet, offer his own input so that the two of them share the vision that makes it to the screen.  This would be a crossover that was conceived and executed entirely by the filmmakers themselves, free from any studio mandates.  As a fan of the director-driven approach myself, this presents exciting possibilities while maintaining the artistic integrity that WB needs to attract talented filmmakers to DC films.

But- as every Justice League fan reading this is asking- what about the ultimate team-up in DCU?  Here’s where I have to admit that this approach doesn’t guarantee any team-ups, least of all Justice League 2.  But what it does do is it guarantees that any Justice League film that does get made would be the product of a vision so compelling and exciting that every DCU filmmaker would have either approved or offered to be involved.  WB can make it clear to the industry and to their directors (once they’re in place as caretakers of these characters): “We’ll take pitches from anyone about a Justice League film, but it’s going to have to involve these established bubbles and you’re going to have to convince each of these directors that we’ve put our trust in.  If you can pull that off, then go make a Justice League film.“

So that’s what WB and DC should do to move forward.  They’ve already brought in three visionaries that they should trust completely in Jenkins, Reeves, and Wan.  Give them their bubbles and let them work.  As for the other DC heroes, don’t entrust them to anyone unless they’re committed for the long haul and you can trust them with the character’s bubble so completely that there’s no need for studio interference.  We all want great movies.  This is the way to make great movies, build public trust in your brand, and set your shared universe apart from everything else.

Now get to work.

If you enjoyed this column, let Trey know in the comments below!

And if you’d like to contribute something yourself, hit the CONTACT tab at the top of the site and let us know! We look forward to seeing you discuss this piece in the Comments and on Twitter!

4 thoughts on “Revenger Submission: “Here’s How WB Can Have Its Cake And Eat It, Too (With The DCU)””